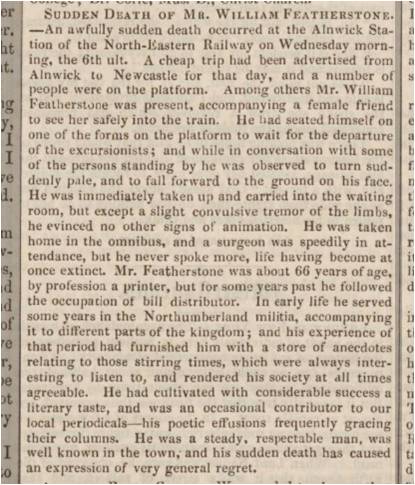 On the 1841 census for Alnwick, they were living in Clayport and the name quoted was Featherson. William’s age was rounded up to 45 and Mary Ann’s rounded down to 35 as was the procedure on that census. William was a printer, living next to Lockey’s yard. They had one son, also William aged 5 born on the 1st of July 1836.

Mary Ann died from cholera on 9th October 1849. On the 1851 census the two Williams, now recorded as Fetherson, were still in Clayport. The father was now a compositor/ printer. Son William Thomas died in July the following year aged just 16, and his father died suddenly on 6th June 1860, at Alnwick Railway station after escorting a lady to the train.