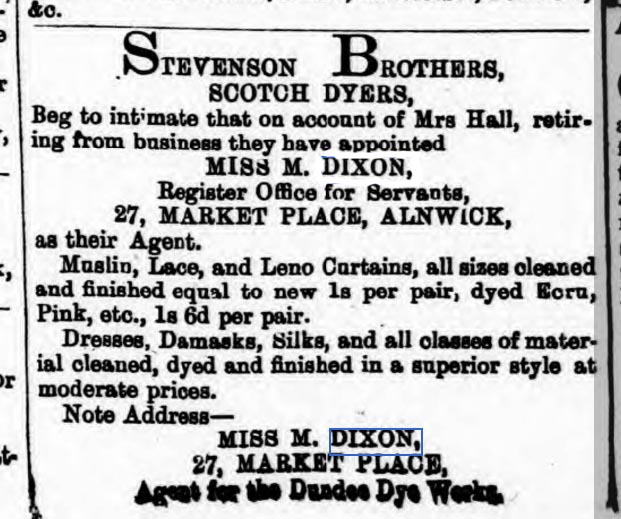 Above: Madeleine becomes an agent for Stephenson Brothers of Dundee :

Isabella Dixon died on September 28th 1849. As it says on her headstone that she was one of two daughters buried with their father, John Dixon.

John was a flax dresser, born in Eglingham and he married Eleanor Swan from Durham. They had at least one son and five daughters all baptised in Saint Michael’s Church. These included:

-Sarah born 16/11/1817 married William Pashley, a painter, in Downham Market, Norfolk. They moved to Holt and raised six sons and one daughter.

In 1841 on the census for Clayport, next door to the Burns (also on the cholera list) there were three women living together. They were Isabella and Magdalene Clay, both single ladies still living with their mother now aged 60. She was “living on independent means” and the two daughters were working, but the writing is illegible, maybe hosiery, as later in life Magdalene was involved in clothing. Their father, John died on 1st November 1843 as his obituary was in the Newcastle Journal for 4/11/1843 so there is no clue why he was absent for the 1841 census.

Ten years later, Isabella had died, her obituary in the same paper as her father’s saying she was a milliner. Mother and daughter, Magdaline aged 33, had moved to Bondgate Within, where she was working as a milliner. Eleanor was 72 and a retired grocer.

In 1861, they were still together in Paikes St, where Magdaline was still a milliner. Eleanor died in 1866, aged 88, so Magdaline had to carry on living on her own. For over ten years she worked as a milliner in Paikes St near Dunn’s the draper, which was a big enterprise and may have employed her. No sign of her in 1881 but in the 1889 voters list she owned a dwelling house in Bondgate .

In 1891 Madeleine owned and ran a lady’s outfitter where Bondgate becomes Market Place, now called Market Street. Her establishment was advertised in Kelly’s directory for 1894, as a milliner of 27 Market Place. She was also agent for Stephenson Brothers dyers, as the advertisement at the head of this page demonstrates. She was over 70 by this time, and had a niece for company. Her sister, Jane had died in 1889 and her daughter, Catherine Carr (54 in 1891) came to Alnwick as housekeeper to her aunt.

Then at the great age of 86 Madeleine was found in Lancashire, living with another niece, Elizabeth Brown, a 68 year old widow. This Elizabeth Paterson Brown was the widow of James Brown a Presbyterian minister from Scotland, (and the younger daughter of Jane, the oldest sister of Madeleine and Isabella). They were living at Number 6 Manse House, St. Helen’s. Madeleine died there three years later, in 1904 aged 89, outliving her sister Isabella by 55 years.