Last year we were very grateful to receive a donation of a collection of proof documents referring to the Militia in our area in the first half of the 19th century.  The documents were purchased at auction and given to us by a donor who wishes to remain anonymous.

Today we are all very familiar with pre-printed forms containing gaps in which appropriate details can be inserted. This not only saves time but also ensures standardisation. However, this is not a particularly new idea and the early 19th century documents in this collection are nearly all forms of this type. They were printed in large batches by the Alnwick printer, William Davison, and his pencilled numbers and prices can be seen on some of the proofs.

The idea of a reserve of troops who could be called on in times of national crisis dates back to the 17th century. By the late 18th century the Militia of Great Britain was a locally raised but nationally funded body. Its purpose was not to serve overseas but to provide security in times of war by guarding coasts and prisoners of war, and in peace time its main purpose was to contain civil unrest. Because of this latter function many of the county militias were not based in their home county as it was feared that they might be unwilling to use force on their relatives and friends. In 1761, for example, a riot in Hexham led to some 50 people being killed by a Militia detachment from Yorkshire.

During the Napoleonic Wars the Militia were very important and the Northumberland Regiment was based in southern England guarding the coast and French prisoners of war before serving in Ireland and Scotland.

The officers of each local Militia regiment were drawn from the landowners in the area and the rest of the recruits were selected by ballot. Every Parish had to draw up a list of the able-bodied men between the ages of 18 and 50 and from this list a number were selected each year by ballot. Below is a handbill from 1811 with the Parish name left blank and the number of names to be drawn also left blank (the larger the Parish the larger the number). 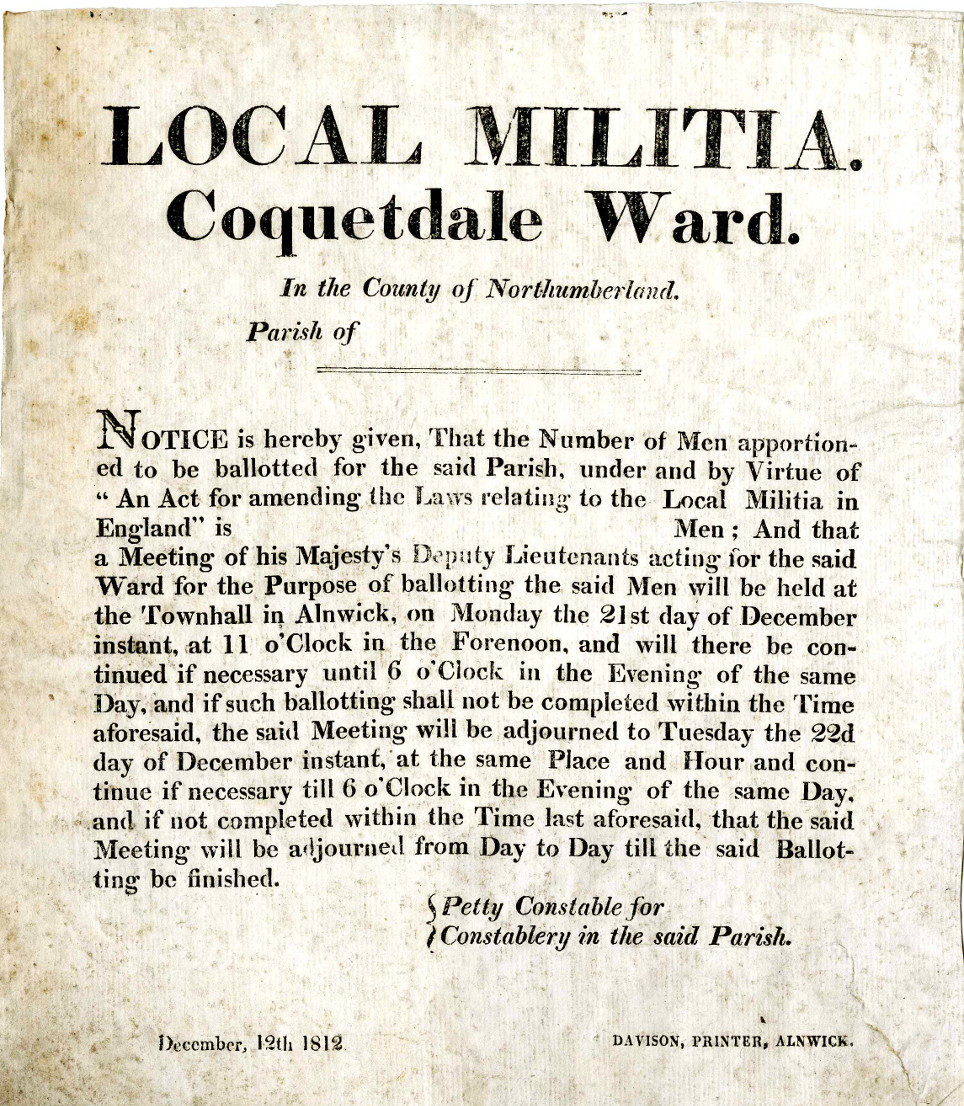 Once chosen, men served for 5 years. However, many employers and wealthier citizens would pay someone to be their substitute, as can be seen from the form below which has spaces for the name of the original person selected and also for their substitute. 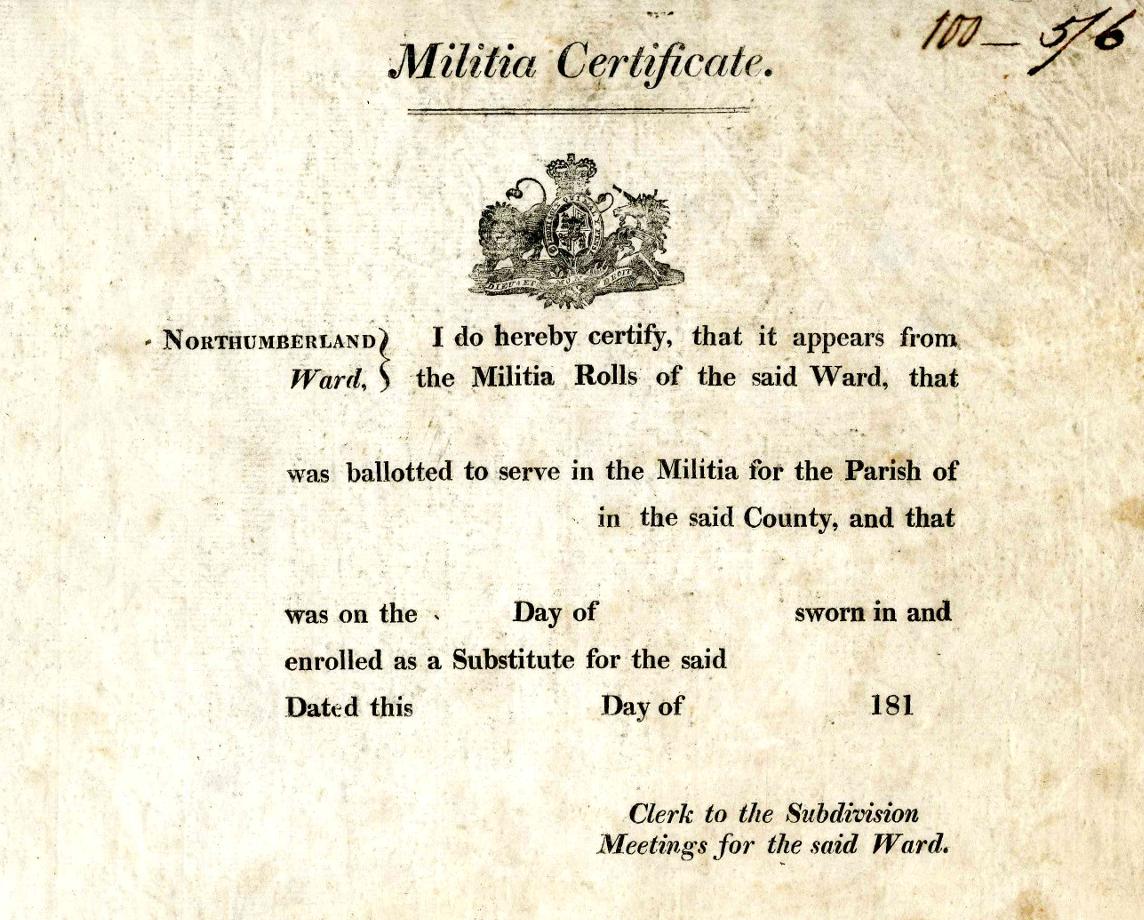 As with all military recruitment the new soldier had to swear an oath: 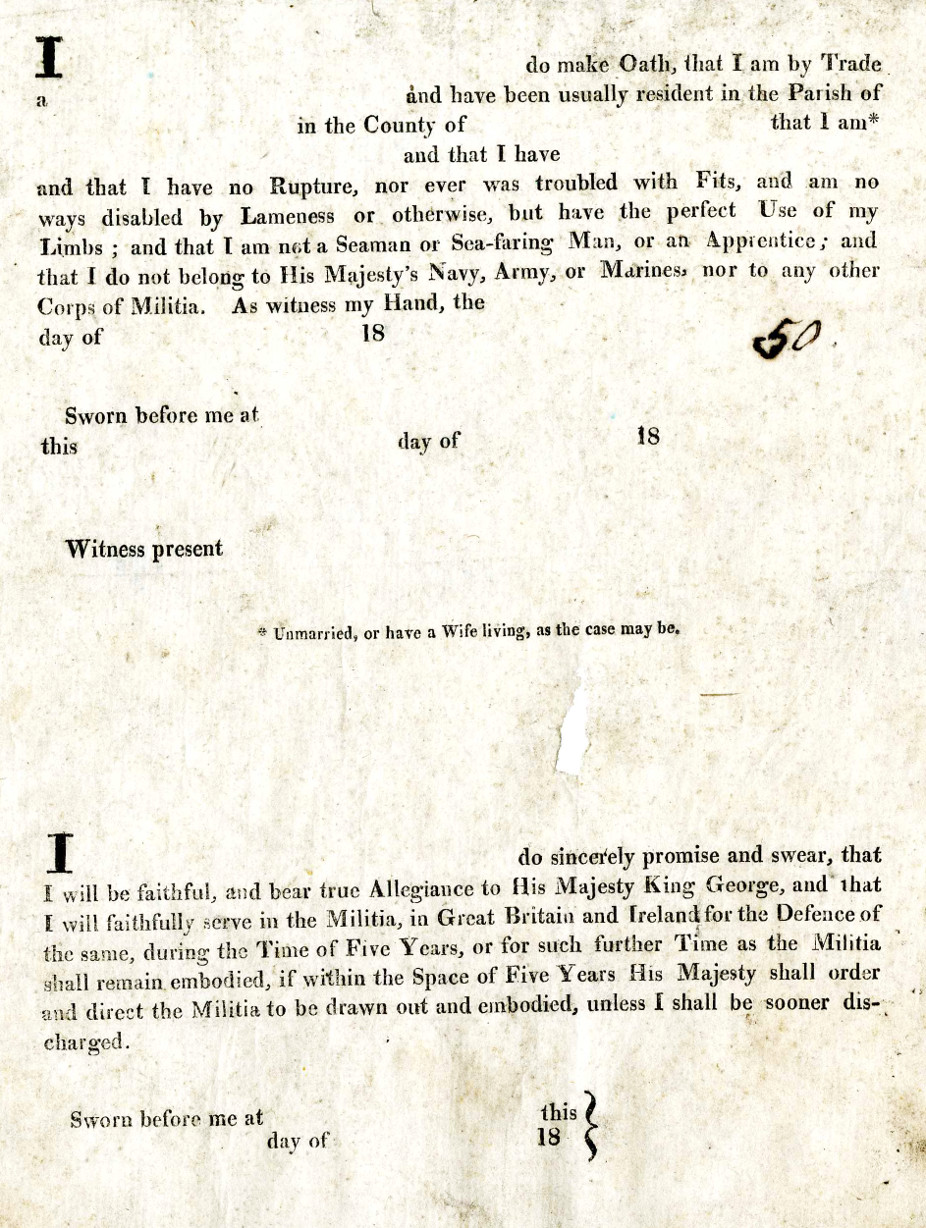 As the main Northumberland Regiment of Militia was away from the county a second, Local Militia,was formed and recruited in the same way, but these local Militiamen did not serve away from their home county. They would be expected to train every summer for a few weeks and to be available in a time of emergency. While they were away from work they would not be paid and to prevent discontent each Parish provided financial support for wives and children as can be seen from the form below: 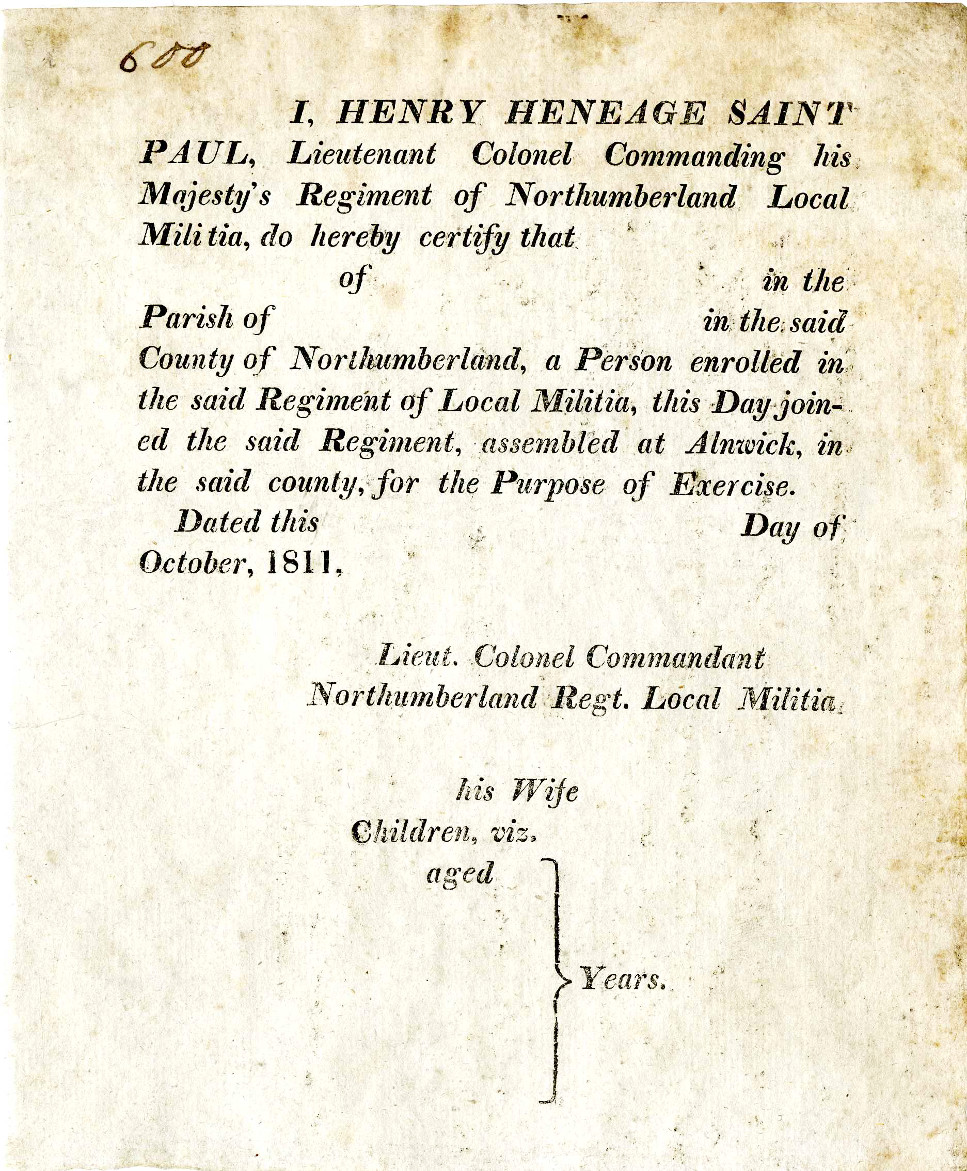 One interesting form is a type of travel authorisation given to a Militia member so he would not be taken for a deserter: 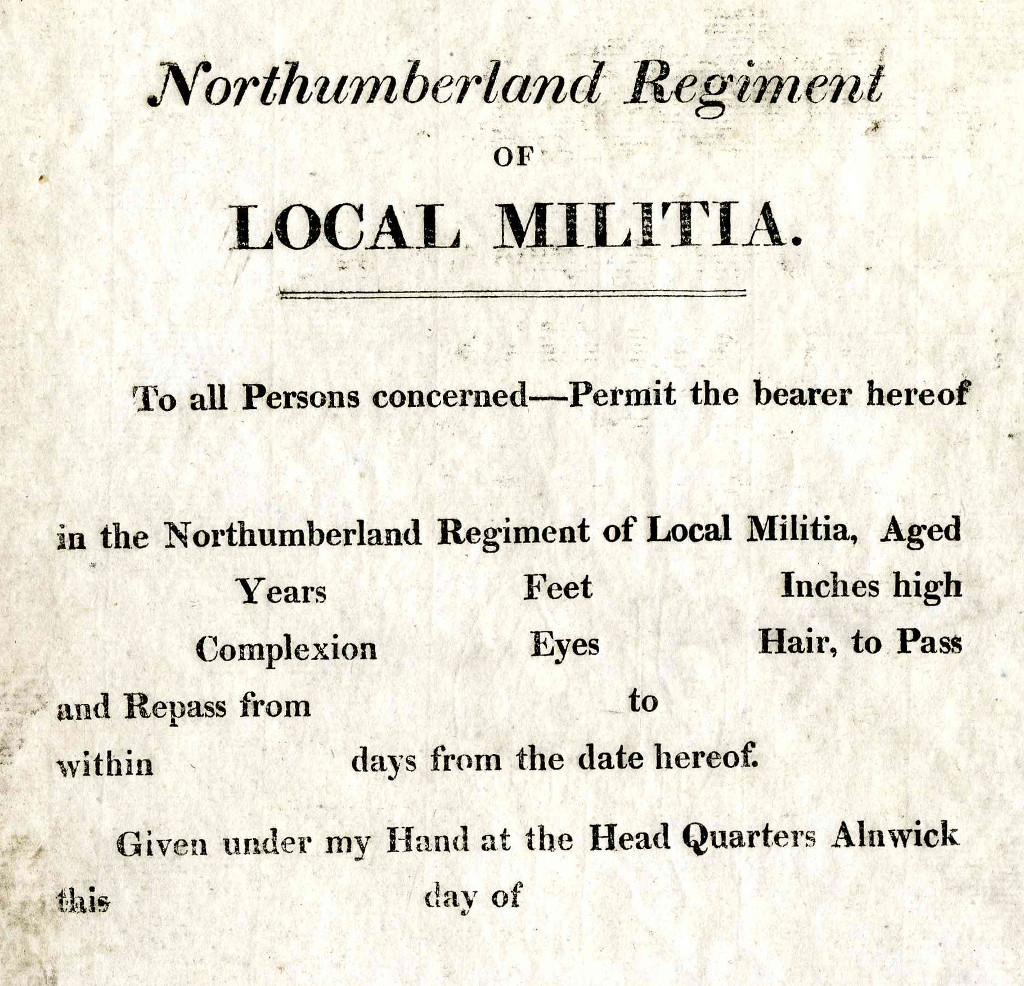 The Militia had powers to requisition horses and waggons to transport their baggage: 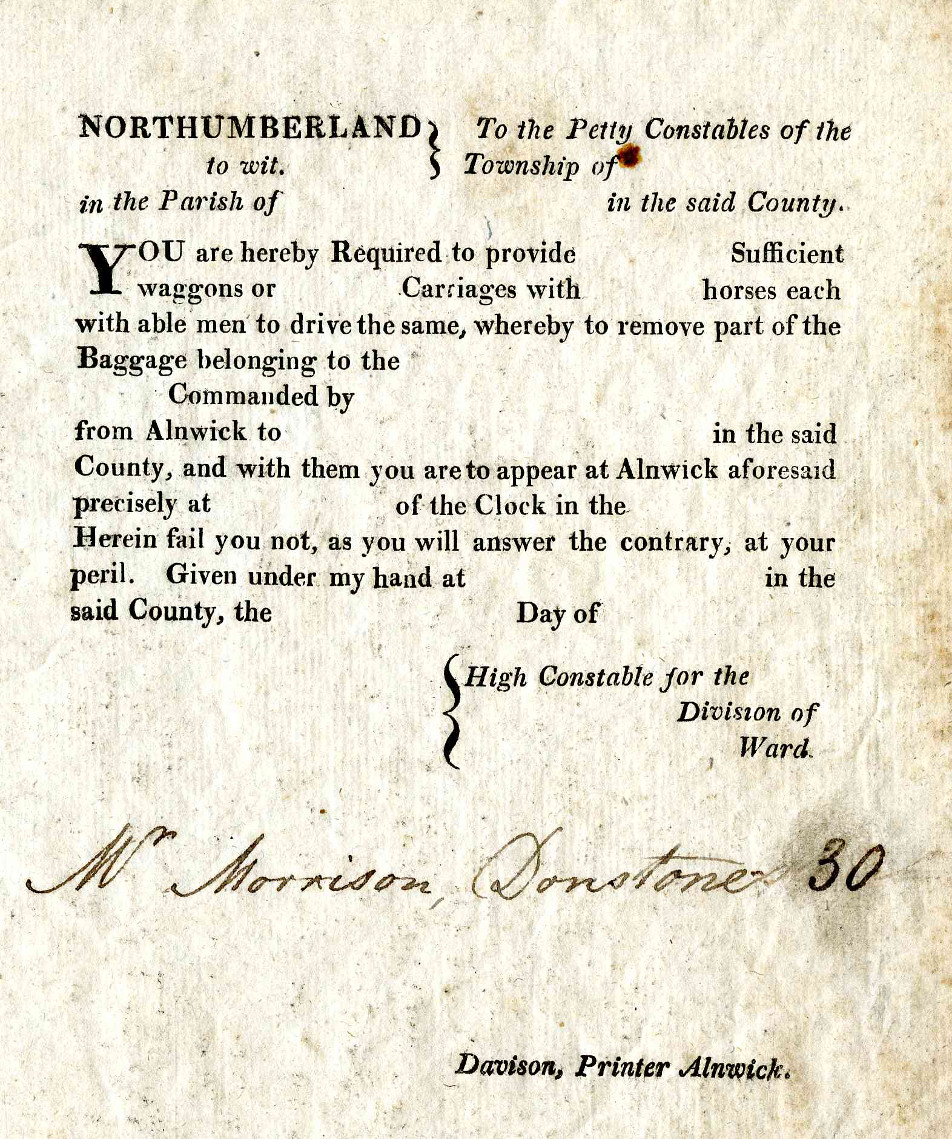 When the Militia left their home area to serve elsewhere they would be given a good send off as this handbill from 1809 shows: 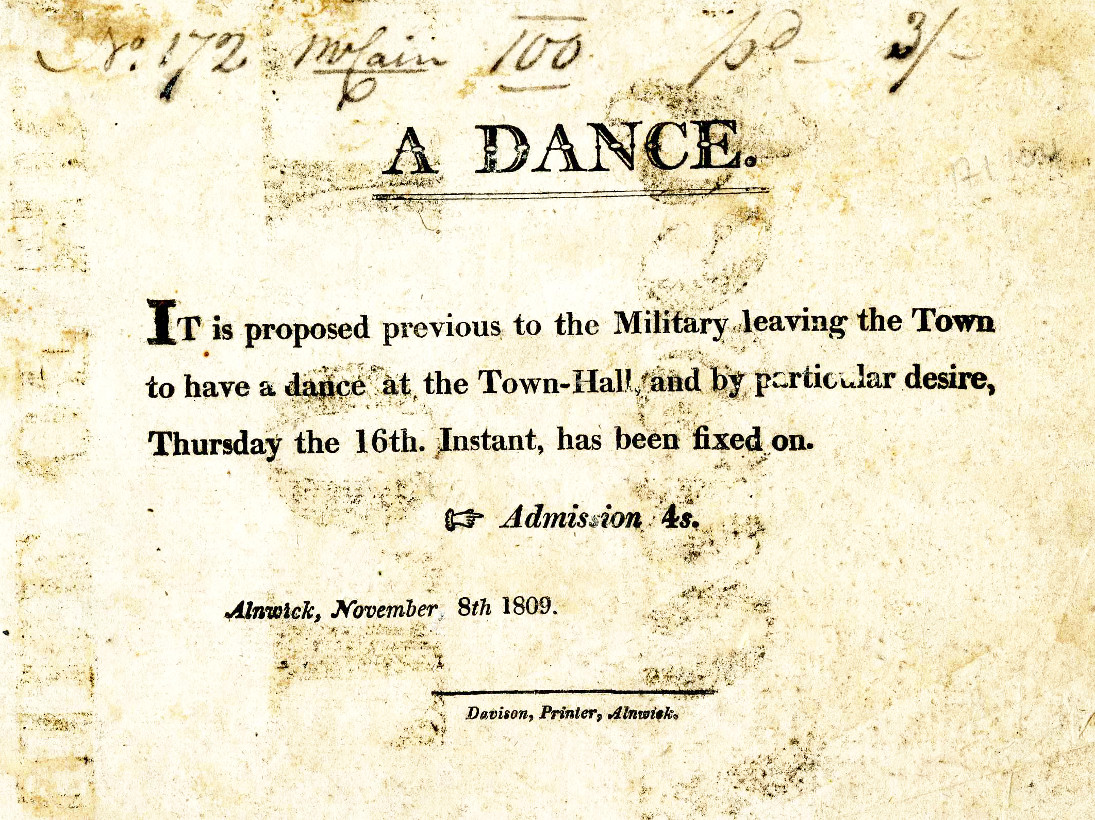 Their bar list for the mess was also impressive (and good value!) 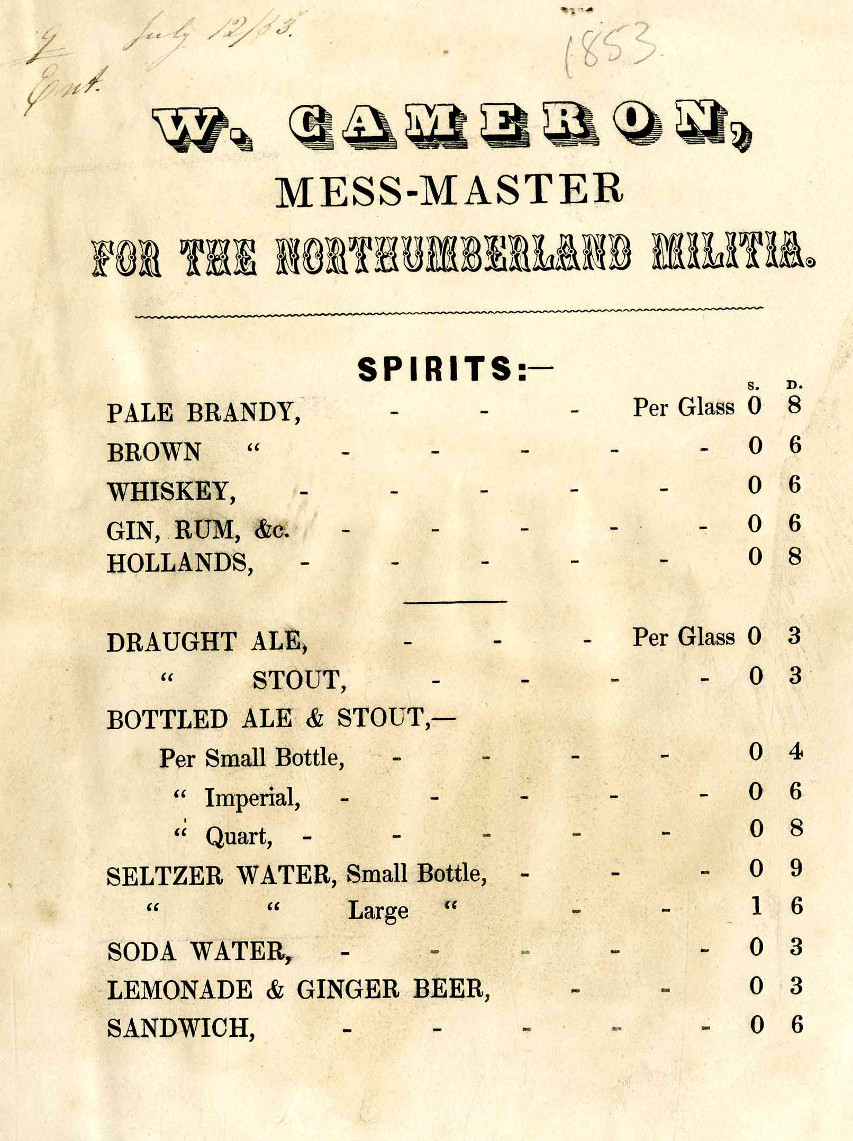 The full set of Militia documents in our collection can be seen in our Documents section.