In 1988 local historian Adrian Ions met Tom Pattinson (a friend) on an Alnwick Street, said he`d like to establish a museum for the district and asked for help. They agreed on the spot to approach several acquaintances interested in local history with a view to setting up a museum in the town. Following the positive initial response, a steering committee was formed with the late Fred Dyson as chairman. The meetings were held in his parlour. We developed a constitution, outline plans for the museum we hoped to create, and applied for charitable trust status.

The 11th Duke of Northumberland was approached and agreed to be Patron of the proposed museum, and the search began for a suitable building, potential sponsors and a designer who could meet our aspirations. This was to take over ten years, during which the 11th Duke of Northumberland died (1995) and his brother Ralph became the 12th Duke. He also kindly agreed to be our Patron.

In the year 2000 Saint Mary`s Church in Bailiffgate became vacant, and we identified it as a building suitable for our purpose. By this time we had an impressive list of potential sponsors and the promise of lottery funding – if we bought the building rather than rent it as we`d planned. By this time Fred Dyson had stood down from the committee and Tom Pattinson was chairman. He approached the Duke of Northumberland with Gavin Kent (treasurer) to explain the situation and His Grace generously agreed to buy the property and rent it to us.

We were involved with `Netherfield Visuals,` an Edinburgh-based firm, during the early planning stages, then changed to `The Works,` a Leeds-based firm, who were responsible for the museum layout at opening in 2002. The engineering was handled by a local firm `DP Builders.`
When the Bailiffgate opened in 2002 there were five foundation trustees, each of which had been involved from the beginning. (shown below). They were Adrian Ions, Tom Pattinson, Sister Mary Brigid, Gavin Kent and John Chappells. A sixth trustee, John Rutherford, joined at the opening. Backed by two years of lottery funding, we also had appointed our first manager-curator (Ian Smith) -although this post is no longer in existence. 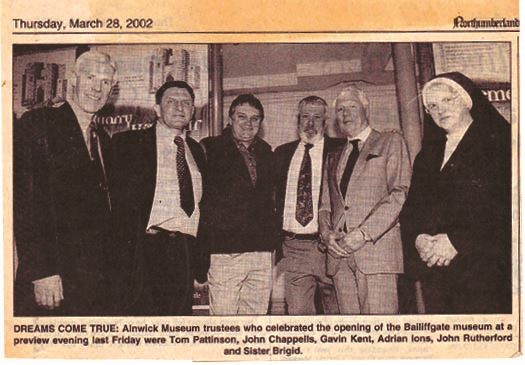