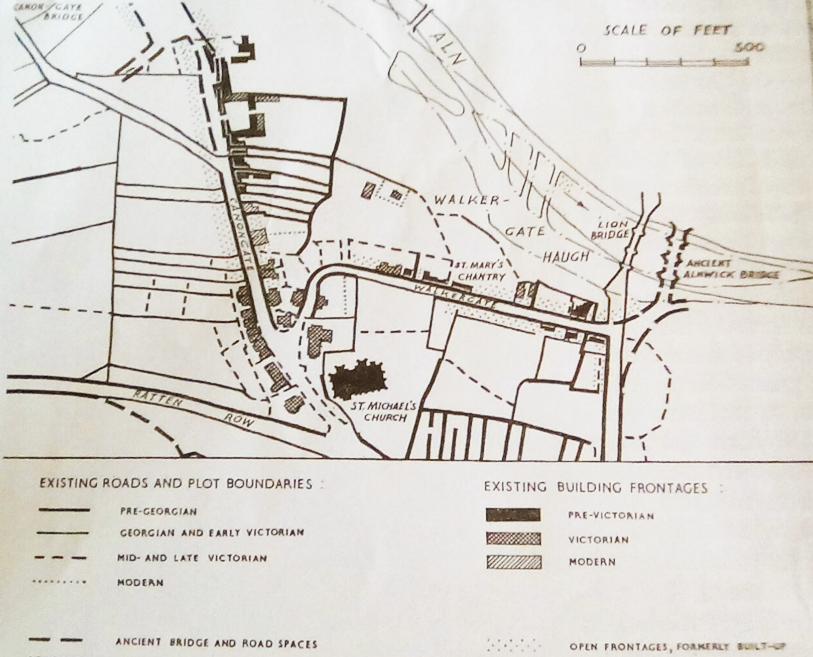 Canongate is one of the oldest parts of Alnwick and for centuries it was a separate township.

Situated on the north west side of the town, its name is derived from the road the canons took from Alnwick Abbey (founded 1140) to St Michael’s Church. In medieval times the manor belonged to Alnwick Abbey and separate guilds developed there from the rest of Alnwick.

In the lay subsidy roll of 1296 Canongate, as part of the manor of Alnwick Abbey Canongate is listed as having 6 tenants, including a baker and a miller. It held is own manorial court and burgesses, who were tenants of the abbey, had rights of pasture on Alnwick Moor. At the dissolution of the monasteries in 1536 King Henry VIII’s commissioners, Sir Cuthbert Radclyff & Robert Kyllyngworth noted that ‘there were 36 burgages and 2 copyholds mainly consisting of a single low row of houses on the east side; Edward Coke held on tenement in Canongate by suit of court and by payment of 4d or of two days work in reaping corn in the autumn; Robert Storey held on the same tenure by payment yearly of 6d or of three days work reaping in autumn. Other tenants listed in Tate’s History of Alnwick Vol II ( p 25) include the following:

The tenants of Canongate 1539:
The Canongate shoemakers were listed as David Myliiken, William Swynhoe, John Anderson, John Waugh & John Clarke in a dispute between the Alnwick Cordwainers and the shoemakers who began selling their wares in Alnwick Market Place. The shoes were confiscated by the Cordwainers Guild until the shoemakers agreed to pay £17 10s by instalments to the Cordwainers.
At the foot of the street on the west side was the site of a burial ground which belong to the society of Quakers and in the early 1800s this was converted into a garden. Opposite the burial ground in medieval time there was a market for butter and eggs and the remains of the market cross and stocks were removed in the mid 1700s. Alnwick Abbey owned two mills in Canongate – the Fulling Mill and the Abbey Mill, the remains of which can still be seen near Canongate Bridge. (Zig Zag II p 16 drawing by Barbara Woodhouse). 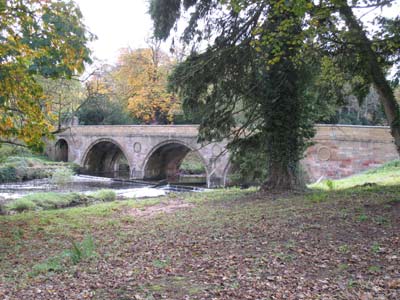 At the end of old Canongate on the old road to Wooler in the early days there was a ford which was dangerous in wet weather and a wooden footbridge with narrow wooden railings resting on high stone pillars on rock at either end. This bridge was washing away in the flood of 1821 and the Duke of Northumberland commissioned a new bridge and diverted the road to cross it – now known as Canongate Bridge.
Canongate Bridge Today
On the west site of the street, fronting the end of Walkergate is a house from the time of James II which was used in 1639 as a meeting house for the Presbyterians before they moved to Pottergate in 1671. The Canongate meeting house was described as having dark wood pews and pulpit. It was used for a time by the ‘Burghers’, a dissenting branch of the Presbyterian church founded in Edinburgh in 1753 and when they moved to Ogle Terrace in 1761 the building was converted into a house. 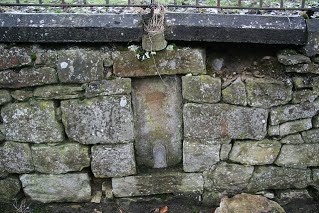 There were 2 Pants (water spouts) in Canongate. Canongate Pant (the Church Well) was at the head of the street with a pump half way down the road. The original Pant was repaired in 1737 and in 1778 it was moved to the other side of the street at the request of St Michael’s church. The carved panel displayed the Town Arms and St Michael & the Dragon. The second Pant on the corner of Walkergate and Canongate may have been the original water supply from the Canongate burn or another drinking trough for livestock. (There is also an old Pant in Walkergate).
Canongate Pant Today
In 1710 and 1730 Canongate Manor was in the possession of Major Isaac Allgood and in 1735 it passed to Sir Lancelot Allgood of Nunwick who sold it in 1765 to the Earl of Northumberland. He initiated the building of many of the old burgages which were in a bad state. He also acquired part of Canongate Common which consisted of 5 acres extending along the river Aln from the Washer burn (Canongate burn) to the Stocking burn from which the freeholders of Canongate were allowed to take stones to repair their houses and coals for the fire. In the 1820s they exchanged their rights to river access for land on Forster’s Close and the Duke of Northumberland allowed them to continue picking stones and coals and he was obliged to provide a water supply and bathing place. In 1838 all the tithes became the property of the Duke for the sum of £10. Up until that tie most houses in Canongate were low thatched tumbledown cottages mainly occupied by labourers, along with a number of tinkers and gypsies and poachers.
In the 1700s one notable inhabitant of Canongate was Andrew Lowrey, a schoolmaster of small children who people believed could see into the future. According to local lore he used his unusual power by raising storms which uprooted trees and tore down chimney pots. He supplemented his meagre income by telling people where their stolen goods could be found and if they were not restored to their rightful owners he publicly denounced the thief. [Tate’s History of Alnwick Vol II) 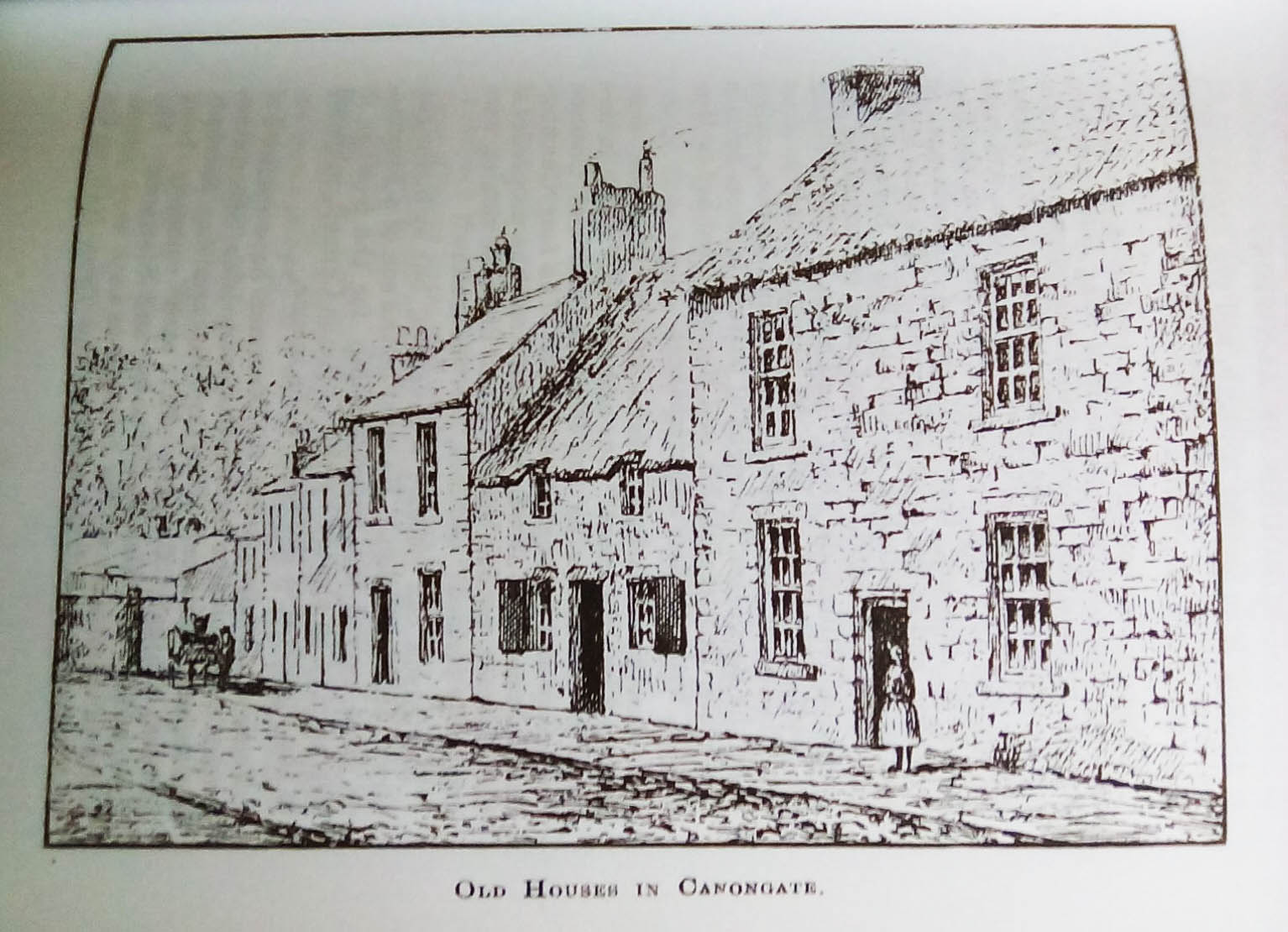 Picture- George Skellys Alnwick History
In 1825 at the top of Canongate just below St Michael’s church Gas Works were constructed by Taylor & Martineau costing £2000 and in 1859 it was enlarged and converted to coal. (It was closed in 1882 when the Gas Works moved to the South Road.) By the mid-late 1800s most of the properties belonged to the Duke of Northumberland who rebuilt the street almost as it is today.
The 1841 census listed 511 inhabitants of Canongate including Canongate Mill (formerly Abbey Mill) and the Dairy. There were 227 males & 284 females (adults & chlldren). Occupations covered a wide range: Shoemaker, Tailor, Joiner, Mason, Labourer, Weaver, Gas worker, Agricultural labourer, Baker, Slater, Porter, Plasterer, Cabinet maker, Miller, Groom, Farmer, Butcher, White smith, Gardener, Painter’s apprentice, Coal carter, Blacksmith, Merchant, Launderer, Drover, Flax worker, Cook, Besom maker, Shipwright, Straw hat maker, Cotton threader, Hawker, Paper maker, Techer, Dairymaid plus a Lodging house and a few paupers.
In 1851 the number of residents had increased to 614 (282 males & 332 females (adults & children) occupying 73 houses and in 1861 there were 536 residents (266 males & 270 females (adults & children) in 76 houses. (Tate’s History Vol II) 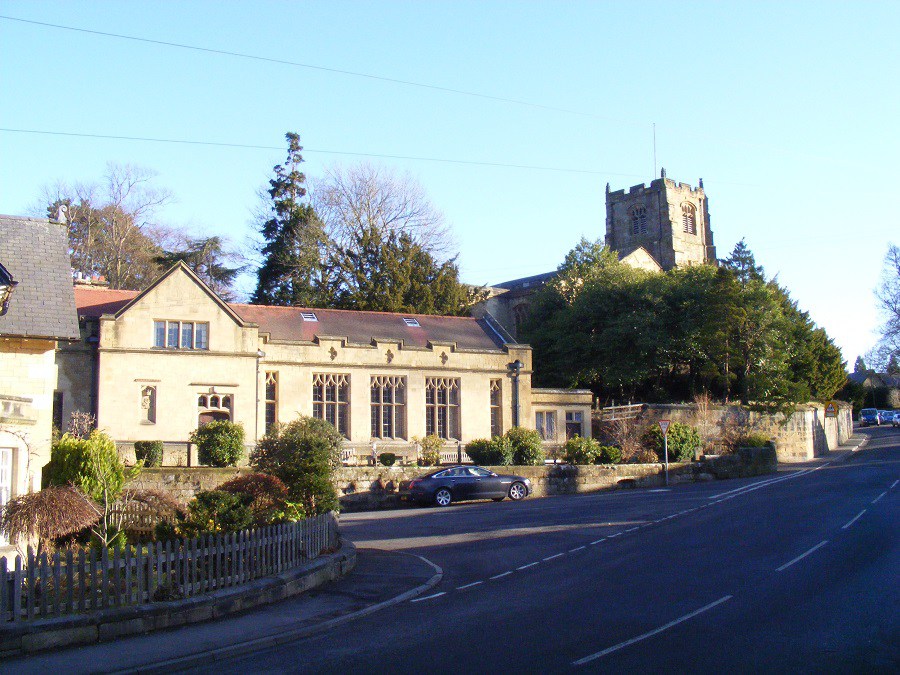