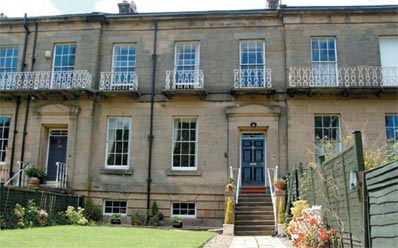 Belvedere Terrace was built between 1827 and 1847, is listed as Grade 11 and lies within the Alnwick Conservation area.

By 1850 Belvedere Terrace had been completed. Ref 1 The Terrace is owned by “sundry owners”, the Duke’s field has been divided into plots and leased to William Newton (Alnwick small tenancies) and a large portion of Mrs Taylor’s land is owned by William Forster esquire.  Many of the trees around the Terrace are also protected by listing. Ref 2   It has been referred to simply as ‘Belvedere’ and ‘houses on south side’ in documents or newspaper articles.

Pevsner refers to Belvedere as ‘Dobsonesque’

The architect and builders are not known. It was built in a late Georgian style with stone facing similar to Percy Street. The Terrace was originally built as five dwellings and appears to be have been built as numbers 1 to 4 with number 5 being added later. The houses all have Trafalgar Balconies at the front on the first floor. The houses have been built on three levels with basements beneath originally designed for the kitchens or servants accommodation. Out buildings and extensions comprising of bedrooms, laundry rooms and boot rooms were added later. Each house is individual and varies in size and lay out.

Extensions to the original houses were in the form of bedrooms and out buildings which appear in the mid 1880’s when bathrooms were introduced into the home. Some are recorded in the Local Board of Health minutes of the time and can be seen at Northumberland Archives at Woodhorn. Thomas Tait had his plans for a new bedroom approved in 1869. The large stone wall and gates in front of numbers 3 and 4 are another addition built in 1881 and are Grade 2 listed. This was designed by John Gibson the Newcastle architect.

Professor Conzen in his book ‘The Alwick Town Plan’ describes the Terrace as follows:-

“ A terrace of unified design, i.e. a terrace in the technical sense , it consists of five houses laid out with a pattern of corresponding strips, in  the open country on part of yet another old furlong, the Goose Flat with the houses and their yards backing on to a service yard alley or mews forming the boundary of the whole land –use so that the garden spaces are strictly between the houses and the road at the front , the arrangement of this group represents a distinct and familiar variant of the Georgian Terrace.” See   map (Alnwick Northumberland Exchange) 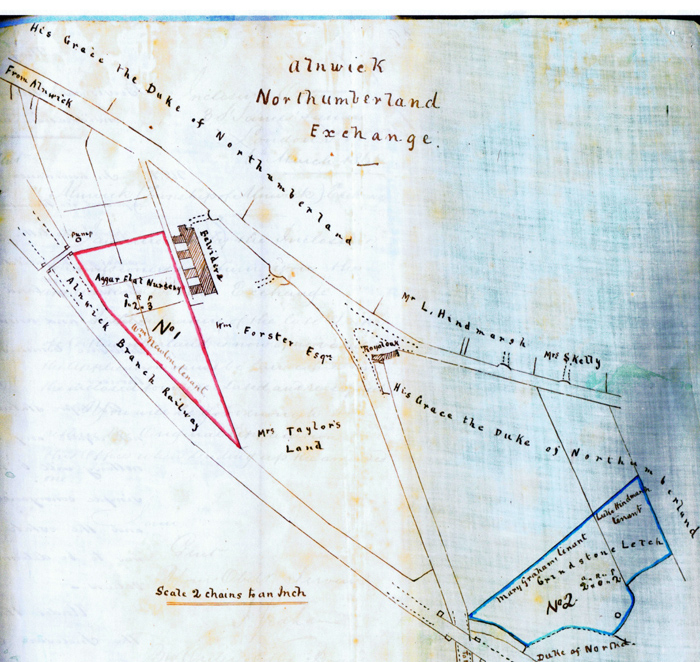 Originally there was a sweeping drive way for carriages that ran in front of the houses.  Evidence for this was found by residents unearthing cobbles in the front gardens. Despite the fact that horses played a major role, being the only means of travel, only the coach house originally belonging to number 5 remains.  The Censuses of 1861 and 1871 show that the Forster’s who lived there employed a groom. There may have been stables on the land to the rear of the houses behind the back service lane. Daphne Towlerton- Leather who as a child lived at number 5 recalls seeing her first car at the start of the 1900’s. Two bungalows were built in the 1980’s on the other side of the back lane behind Belvedere. The wall outside number 1 was repositioned in the 1970’s to allow better visibility for motorists along South Road.

The Terrace was probably built on the out skirts of Alnwick for the residents to enjoy healthier, rural surroundings and easy access to the town. A private back lane runs behind the terrace which acted as a service road. Behind Aggar Nursery garden, and to the side, William Newton rented a plot for agricultural use.  Alnwick Railway Station, started in the 1850s, lies beyond this and the Work House which was built in 1840. The late 1880s saw the building of Aydon Gardens on land which had been used as market gardens. Spring Gardens is directly opposite the end of the back lane to the Terrace and was also a market garden. The open land surrounding Spring Gardens and opposite to Belvedere was often used for the Percy Hunt to meet on.