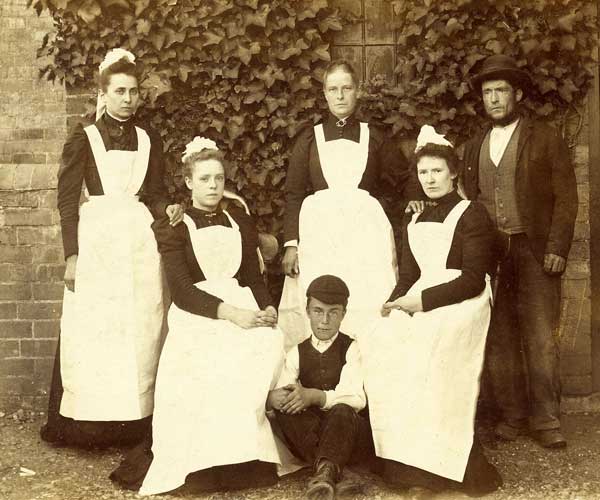 Household servants around the 1890’s

Belvedere was  home to a number of servants who serviced the houses and “lived in”.

Servants would have slept down stairs and lived in the basements, since none of the houses have attics and there would not have been sufficient bedrooms up stairs.  Evidence of cooking ranges can be seen in some of the basements along with wine cellars. Access to the basements was by  staircases at the front or rear of the properties.

Servants tended to be recruited from outside the area e.g.  Scotland.  Servant fairs or local adverts were used to recruit staff. Employers did not want to employ local servants who would gossip about them. The Alnwick Mercury, in November 1878, recorded that there had been a considerable attendance at the servant fair held in the Corn Exchange. The wages offered had been very low. A girl would be expected to earn £5-7 for six months work as a house maid, lads would be offered £6-7 per half year and older ladies £8-10. The equivalent of £10 per year in today’s money would be £77.

Girls could be expected to start a life in service as young as eight years old in 1871, but Belvedere does not have records of any this young in the Victorian period. If they employed “nurses” these were also older than fifteen .The houses in the Terrace would have an average of three per house consisting mainly of general servants, maids, cooks, and/or  grooms.

Lives would have been isolated from friends and family, with a very hard regime of work. There were no holidays for servants before 1890. In the 1880’s they could have expected a half day free to be taken after Sunday lunch. By 1900 it had been extended to include an evening in the week. However, in May 1874, the Alnwick  Mercury reported that the servants at Belvedere Terrace and a few friends were entertained to supper and a ball by Miss Tate, the sister of Thomas Tate, to celebrate his marriage to Miss Grey only daughter of John Grey. There were many toasts, drinking and dancing!

In 1891 there were 1.38 million indoor servants in the UK but by 1911 this has dropped to 1.27milllion. The censuses for Belvedere also reflect  falling numbers of servants from the start of the 1800’s until the start of the 1900’s.