Although it is currently closed due to the Covid 19 pandemic, recent refurbishment of the Alnwick Playhouse has prompted us to look at items from our collection which relate to the history of theatre and entertainment in the town.

The earliest such item was given to us last year and it tells an interesting story. It is a handbill advertising a play to be performed at the Town Hall – a tragedy called Douglas or The Noble Shepherd. Unfortunately it has also been used by a local joiner who wrote on both sides of the handbill in making notes for a job. 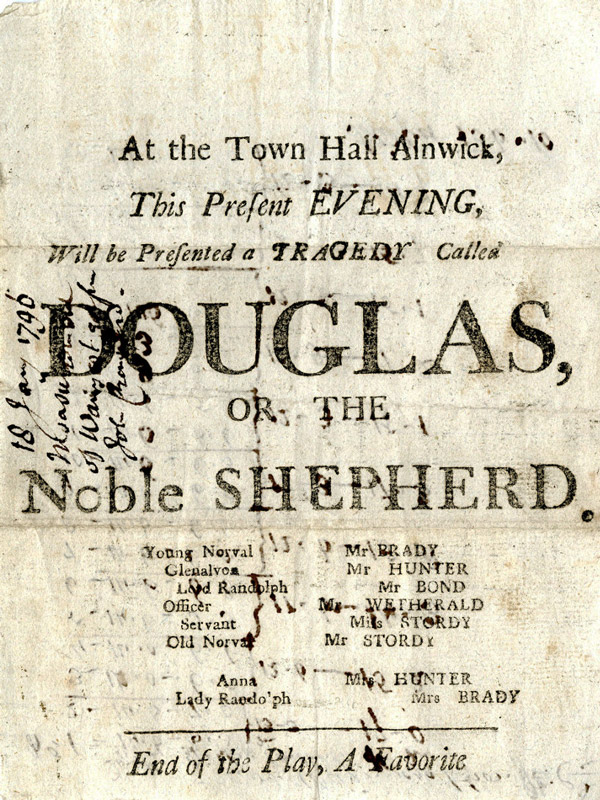 Reverse side (the costing calculations!) 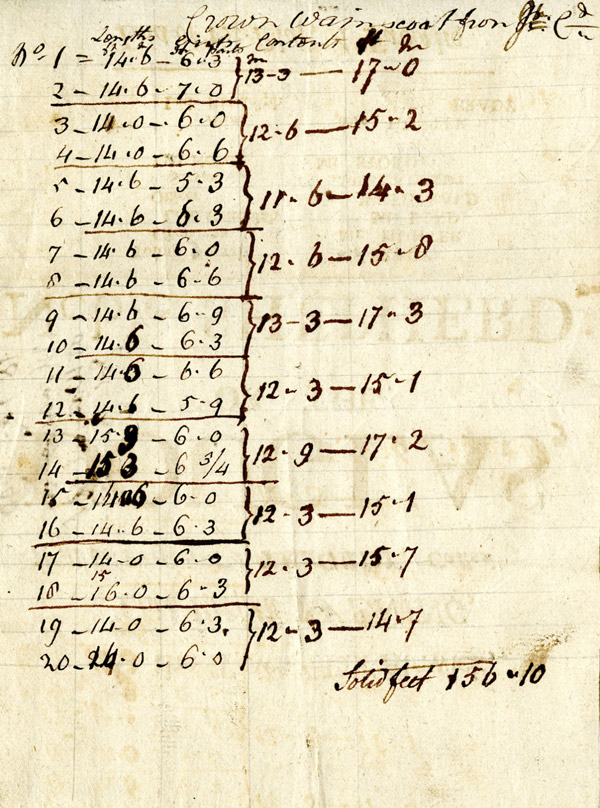 Paper was expensive and presumably the joiner found the discarded handbill useful to note down the measurements for the wainscot he was going to supply (an 18th century equivalent of an estimate on the back of a fag packet). The handbill itself is not dated but fortunately the joiner has recorded the date of his estimate for us – January 18th 1796 – so we know the play must have been performed before then. 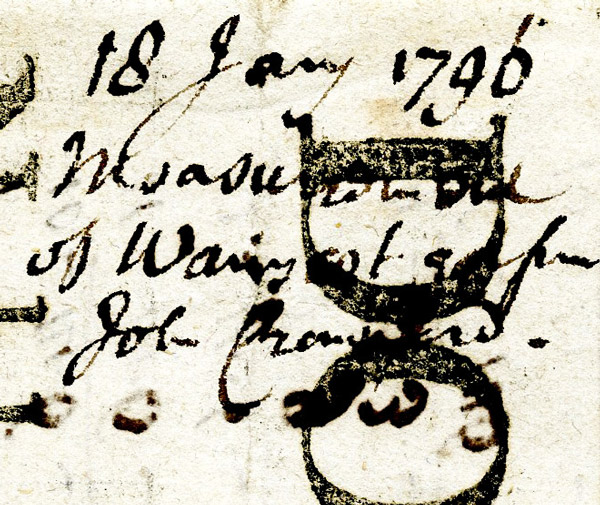 Unfortunately the handwriting partially obscures some of the print on the handbill but some digital restoration work has removed most of the writing so we can see the original print more clearly: 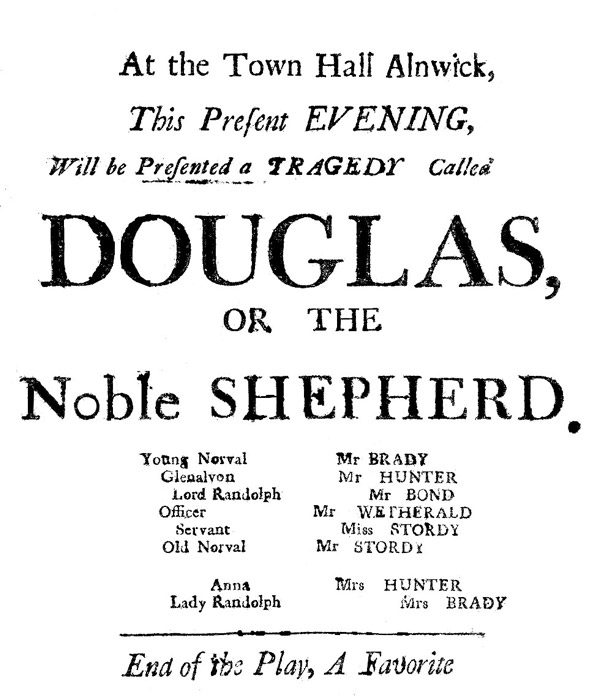 It is highly likely that the actors involved would have been a travelling company including what would appear to be two married couples and also a father and daughter. Such family based groups of actors were common (there is an excellent description of such a group in Dickens’ Nicholas Nickleby).

Not quite as old but still going back over 200 years is this original handbill from 1812: 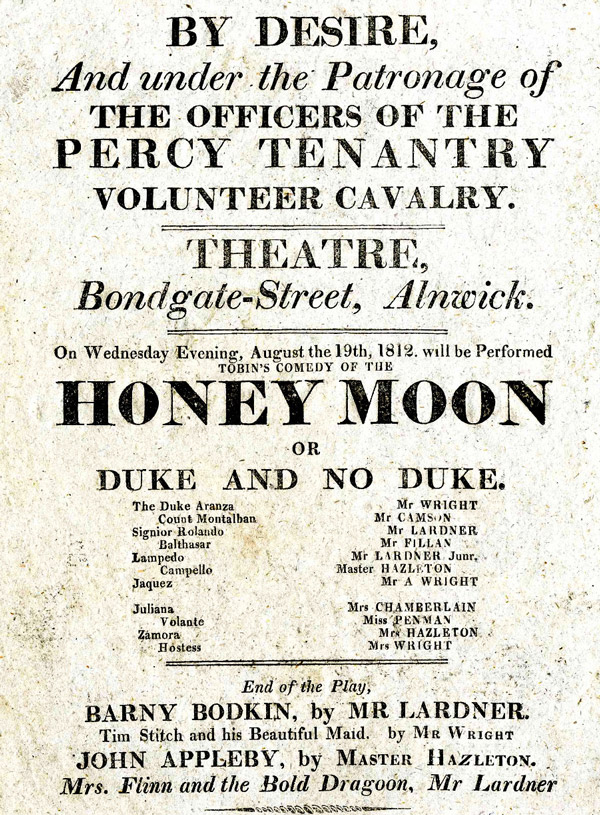 Again this is a company with various family ties. Here the performance has been sponsored by a group of patrons – the officers of the Percy Tenantry Volunteer Cavalry – and this was not an uncommon practice. We do not know where the theatre on Bondgate Street was located. The entertainment was not just a play but also some monologues at the end. This was a common practice at the time.

Some of the theatrical handbills and posters in our collection are facsimiles rather than originals. Here is one from 1820, again with a cast of players who have family ties. This would have been quite a long evening with Romeo and Juliet, some songs and a one act farce to conclude the entertainment. 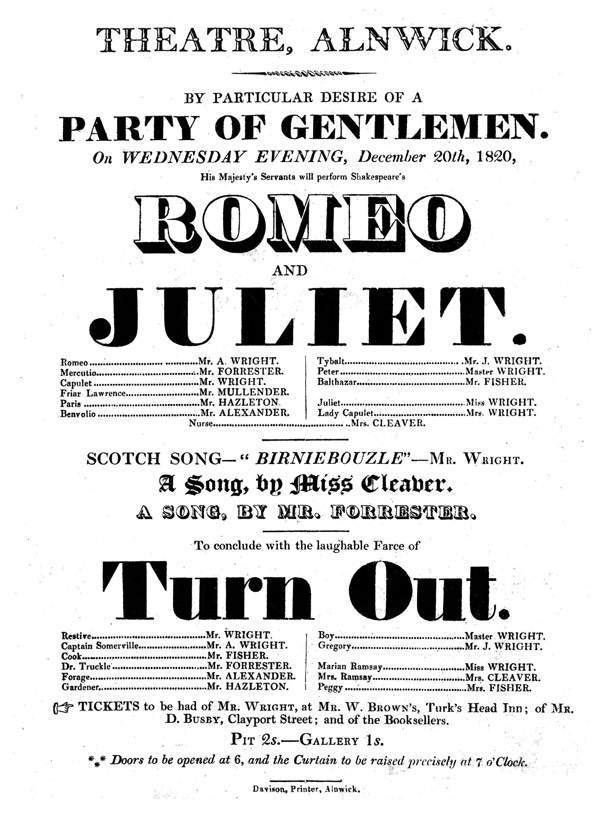 By the middle of the 19th century there was a theatre located off Fenkle Street behind the Nag’s Head inn. It is shown below on the 1851 OS map of the town. 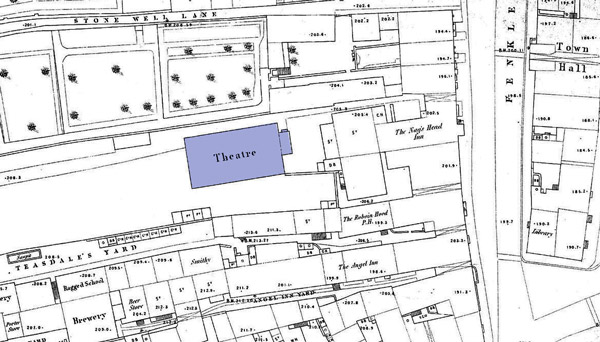 In the 1860s this theatre was converted into a chapel and it would appear that there were then a couple of decades without a permanent theatre in the town, although there were visiting performances in a temporary tented theatre in the Market Place. 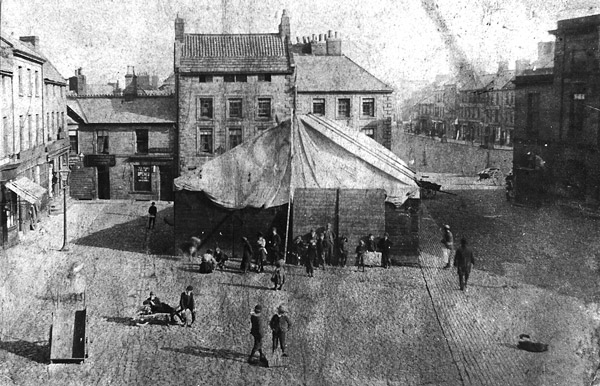 Theatre goers in Alnwick had to wait until 1886 before they could again see a play in a permanent building. In that year work was done on the Corn Exchange building to make it suitable for performances. A proscenium arch, painted backdrop and movable stage and seating were installed. The building had been opened in 1862 to trade in grain but the increasing imports of wheat from North America in the 1860s and 70s caused wheat prices to fall by over 25 % and many local farmers switched to livestock farming. By the 1880s the building was used for a variety of purposes and in 1886 the Moore Brothers (printers) and the Sanderson Brothers (grocers) commissioned the necessary work to enable theatrical productions to take place. After a trial run of Variety shows in November (in which Pongo, the human monkey, was the undoubted star) the formal grand opening took place in late December. Here is an advert from the local newspaper:

By the early 1900s the Corn Exchange was also showing films and a typical programme would include both variety acts and short feature films. However, on occasion there would be something rather more special. We have in our collection a publicity pamphlet for a concert in 1906 by the Fisk Jubilee Singers. Formed in 1872 by African-American students at Fisk University in Nashville most of the original members were former slaves. They performed a capella spirituals and gospel songs. Members of the group toured the world and the trio who came to Alnwick in 1906 had previously sung in Australia and South Africa. 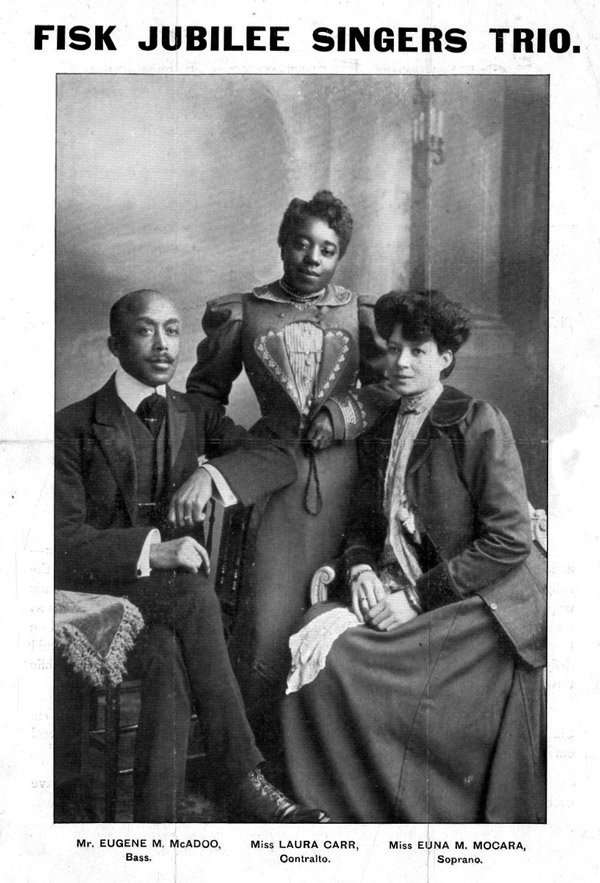 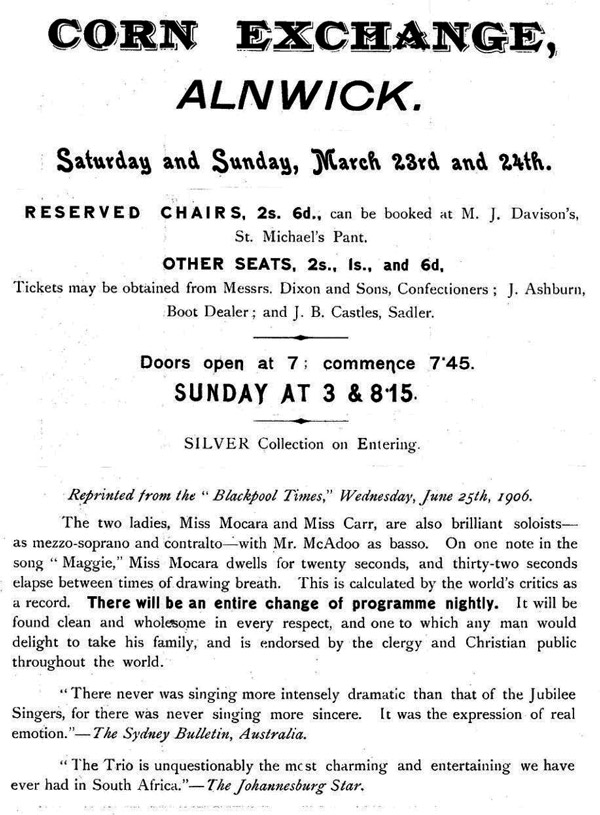 The Corn Exchange was undoubtedly a successful venue. However, because it was not a purpose built theatre or cinema, and also because access from the town centre required climbing a steep flight of steps, there was a growing feeling that the town needed a purpose built venue. The Great War put any plans on hold but afterwards the idea was resurrected and the possibility of building a new theatre/cinema on the site of some old houses and the derelict Militia Depot on Bondgate Without was considered. First to look into this was J H Sanderson the owner of the Corn Exchange. We have in our archives a copy of a letter sent to Mr Sanderson in 1921 by the architects Reavell and Tebbs detailing the results of a site survey they had undertaken for a possible new Playhouse. 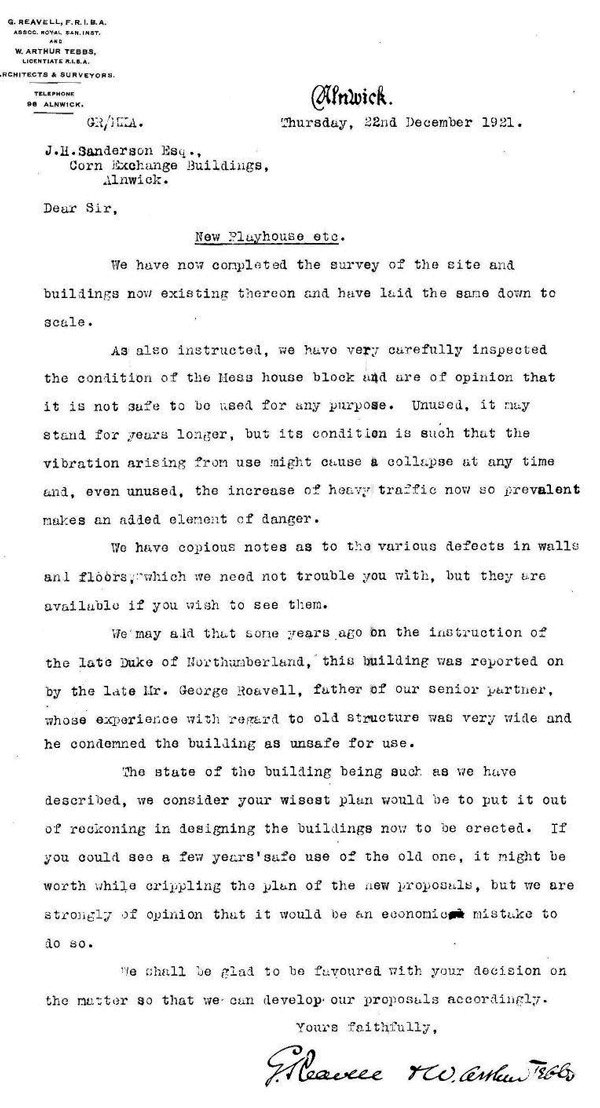 For some reason Mr Sanderson did not pursue the idea of building the new Playhouse and it was not until 1925 that the new Playhouse was built by a company led by Alnwick-born Mr Fred Willcox, himself a variety performer. Given the enormous growth in popularity of cinema at that time it is not surprising that the main function of the new venue was as a cinema, with occasional variety performances. 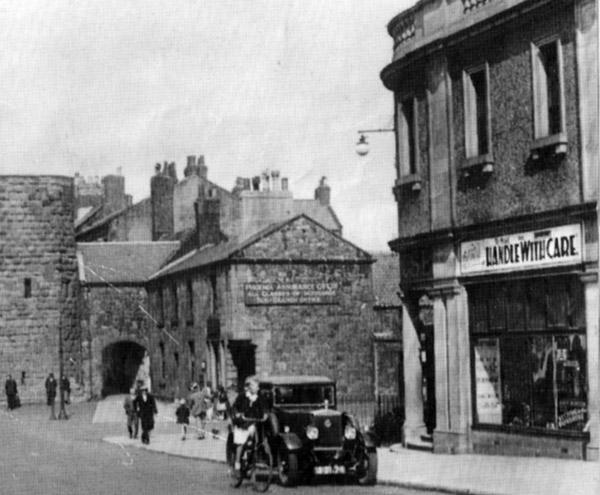 In the years immediately following the Second World War a very popular event at the Playhouse was the annual pantomime “ By the children, for the children” in which young performers (almost entirely girls) put on a taditional pantomime. Supported by both the Duchess of Northumberland and the Dowager Duchess the shows raised several hundred pounds each year for the NSPCC.  Here is the programme and cast list for the 1950 production of Cinderella: 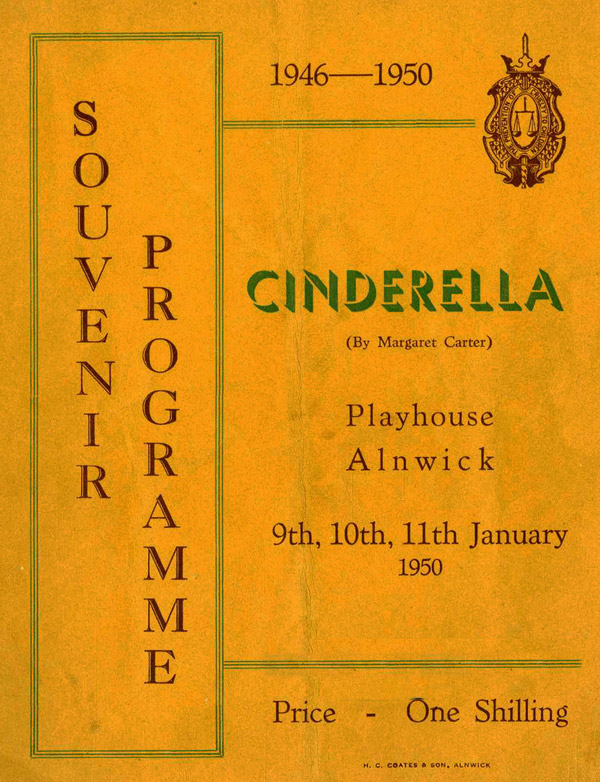 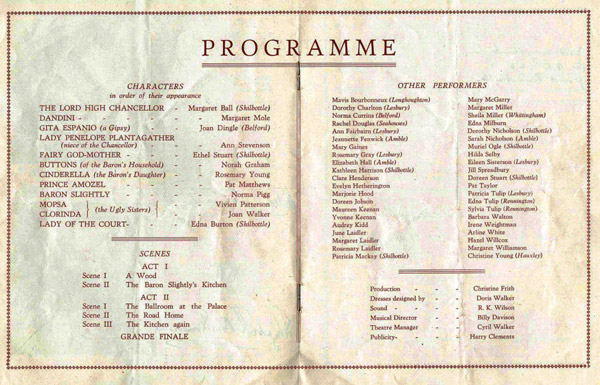 And here is a photo of performers at one of the pantomimes: 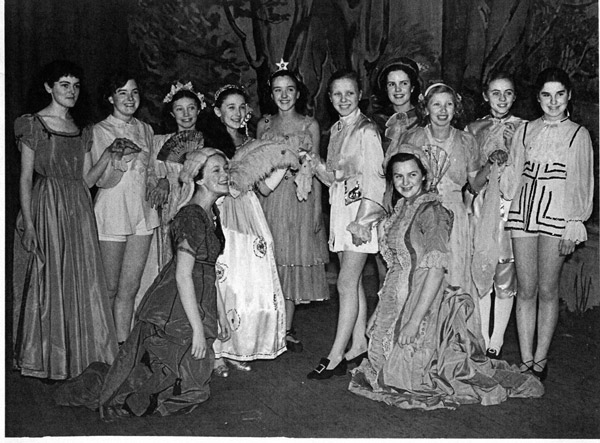 Finally, for those old enough to remember Saturday morming matinees here is a photo from the Playhouse stalls in the 1960s: 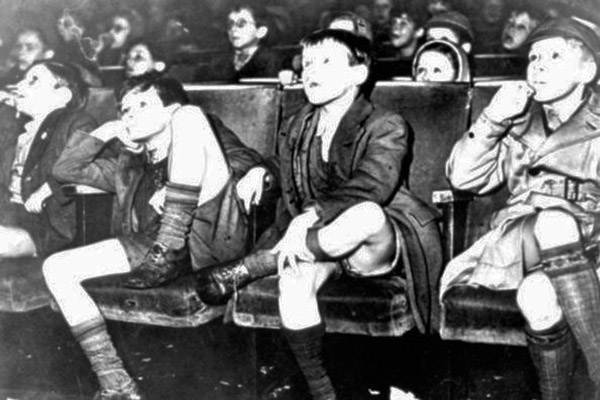 If you would like to read more about the artists performing at The Corn Exchange in 1914 and 1915 you can turn to the item about Douglas Common in  the “Stories From Our Collections” section of this website.