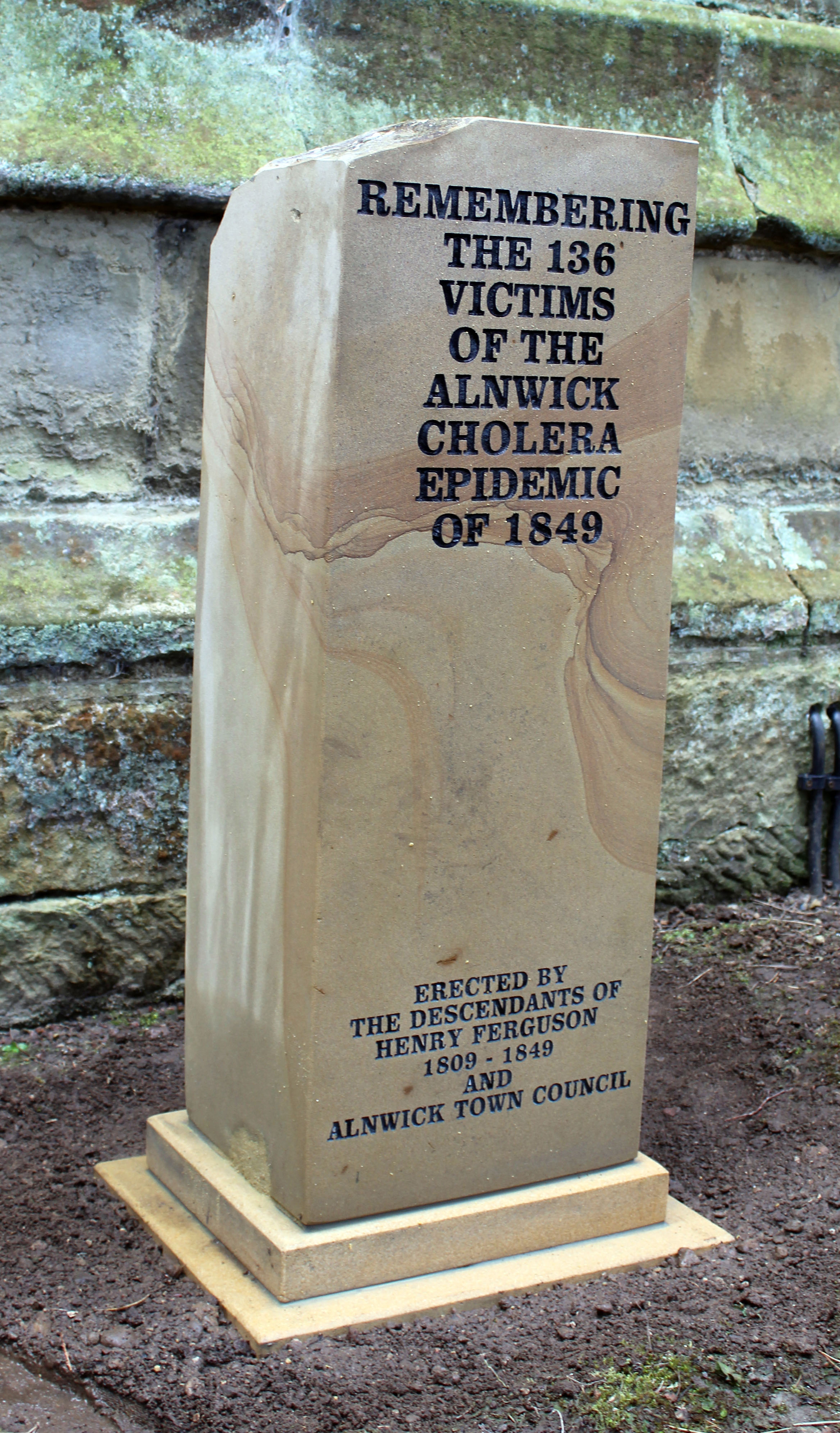 Over the course of the 19th century, cholera struck down millions of people across virtually every part of the planet.

Before the real cause was accepted as a bacterium, and decades after that fact was known by scientists, authorities around the world were only too keen to blame the victims themselves, or factors beyond municipal control. They cited  loose sexual morals, the demon drink, changes in the earth’s magnetism or, a great catch-all phrase, the miasma, or local mist.

The cholera outbreak of 1849 left Alnwick devastated at the loss of 136 citizens. More died than at the recent Hillsborough and Grenfell Tower national tragedies, and in a small town. 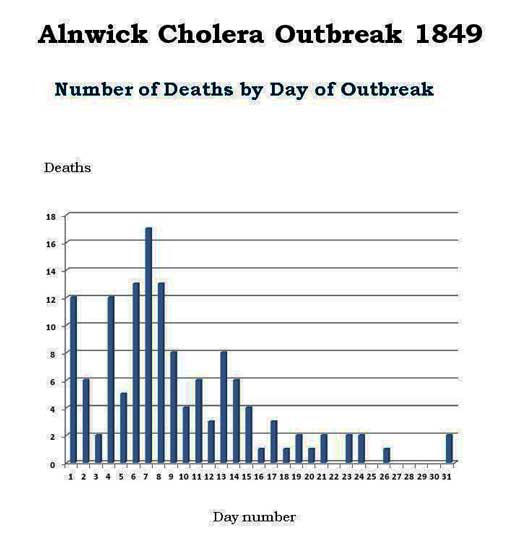 Because the Alnwick authorities were overwhelmed by so many deaths in a very few weeks, the majority of victimes were buried in mass graves in St Michael’s churchyard. In a very few instances, the relatives of the dead were sufficiently wealthy to be able to arrange a separate grave. 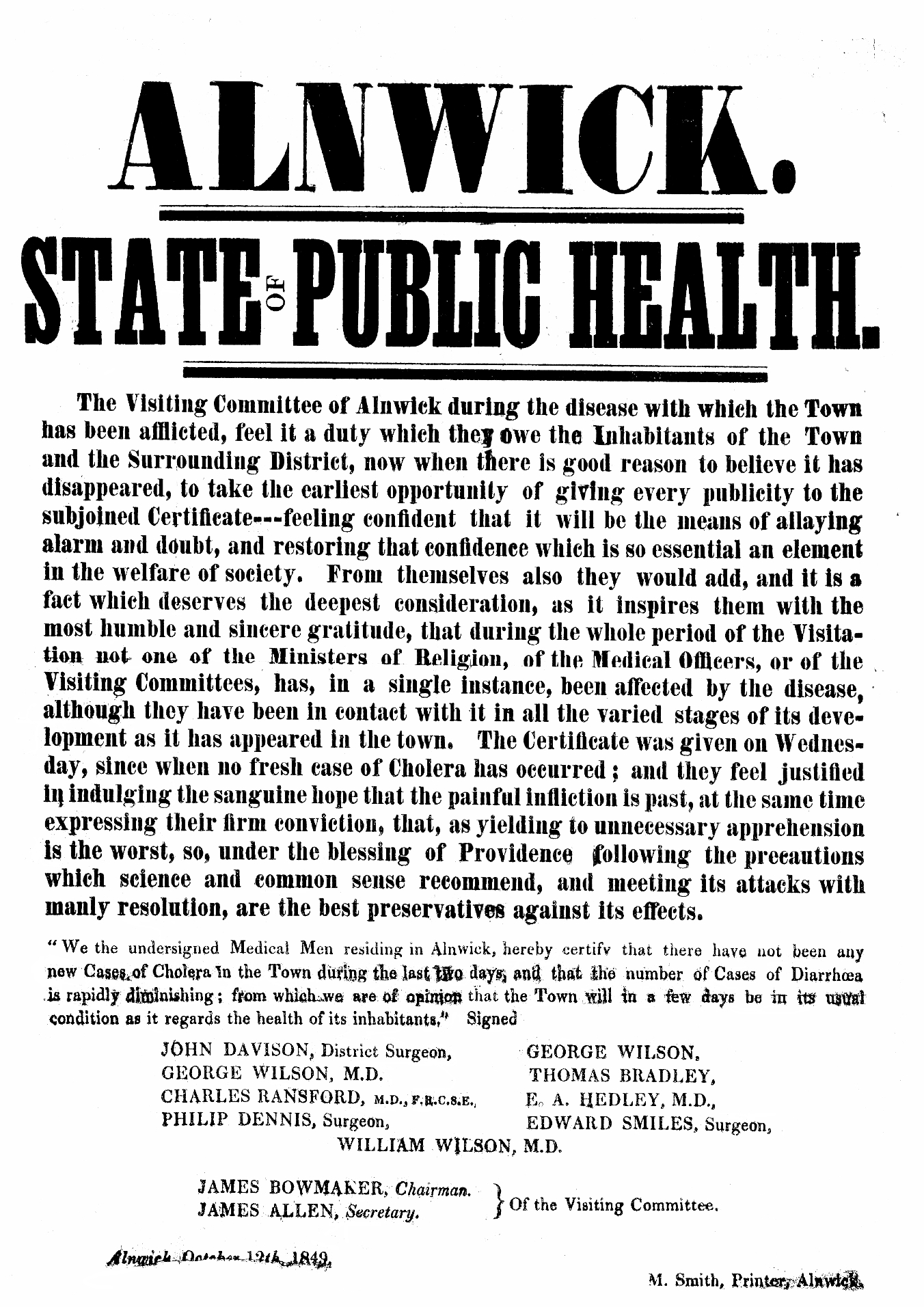 The town obviously suffered a major loss of business as people held back from coming into an area which had become well-known for the severity of its outbreak. This led to reassuring updates being issued as per the handbill above (although some more deaths from cholera did actually follow this “all clear” announcement). 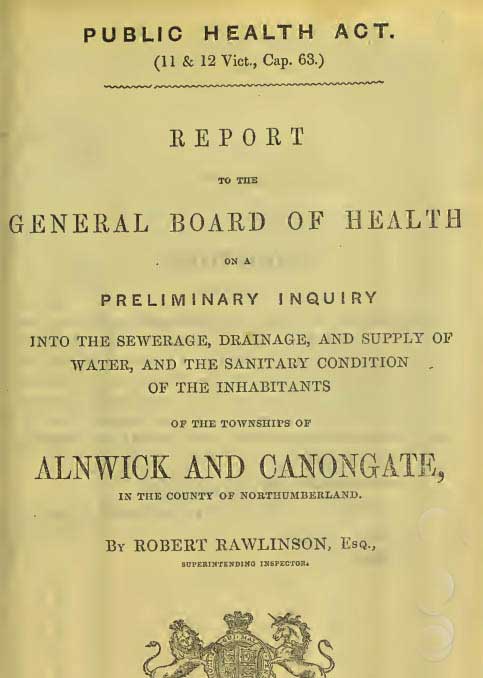 An independent inquiry into the tragedy in Alnwick, led by Robert Rawlinson a sanitary engineer. This was the first such investigation Rawlinson conducted, although he went on to carry out a number all around the UK. From his personal visits to the houses in Alnwick struck by cholera, he came down on a view that unclean water supplies, overcrowding and terrible sanitation lay at the heart of the problem. His map showing the concentration of deaths in the poorest part of Alnwick preceded the similar map of the Broad St area of London drawn up by Dr John Snow by four years. Most important of all, the Rawlinson report led to Alnwick gaining a new, clean water supply and in time proper sanitation, a move mirrored in other parts of the country. 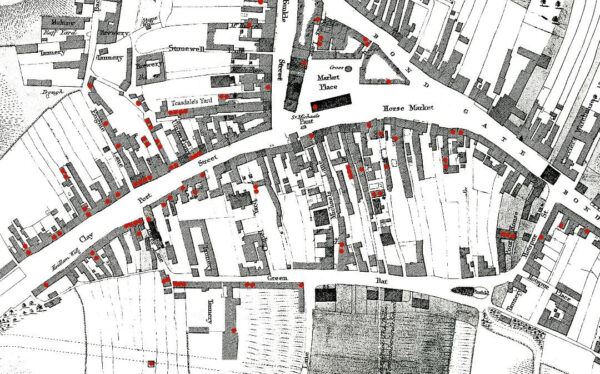 A new memorial to Alnwick’s cholera victims has just been erected in St Michael’s churchyard  Alnwick  (see above). It may be found just to the rear of the church. This was arranged by the Alnwick Branch of the Northumberland and Durham Family History Society and kindly sponsored by the descendents of one of the victims, Henry Ferguson,  and Alnwick Town Council.

Although there have been numerous later studies of what happened in our town’s worst weeks, Alnwick Branch of the Northumberland & Durham Family History Society has focussed more than any investigation before the on victims and the families who lost loved ones. What are the stories of those left behind? In some cases those left with no father or mother, or parents without their children. Some family histories have been unearthed in quite significant detail, in other cases the trail has gone cold over the course of more than 150 years.

Attached are the stories of the 136 people who lost their lives in this tragic outbreak, in as much detail as is available from current records*

This project has been conducted by the Alnwick Branch of the Northumberland and Durham Family History Society.

*If you believe your family lost someone in the 1849 outbreak, or you would like to give us any more information, we would love to hear from you.