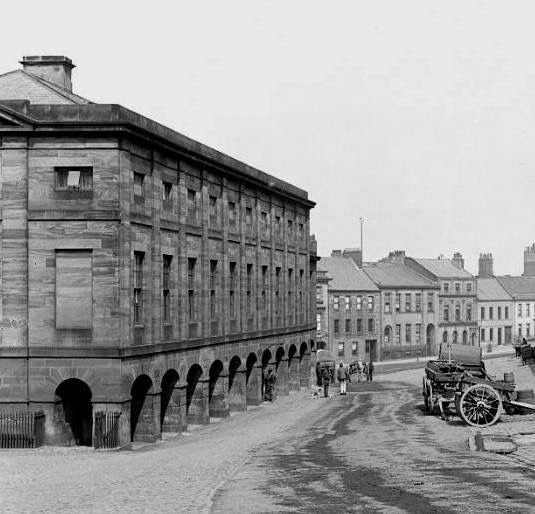 Above: The Northumberland Hall Alnwick  around the time  that Joseph was keeper.

Margaret Marshall died, age 54 on September 26th. She was born in Alnwick and was baptised in the Sion Chapel, on 4th November 1799. Her parents were Richard and Margaret Taylor. She had at least one sister, Phillis (1811-1855).

They had at least one daughter Anne, born in 1827. Anne appears to have been born in Usworth (?) County Durham. She was mentioned, however on the 1841 census for the south side of Narrowgate Street, Alnwick.

Joseph and Margaret’s ages were both rounded up on this first census to 45, and he was a publican at that time. Phillis (Taylor) was also living with them. When Margaret died in the first week of the cholera outbreak, she was buried with a neatly carved headstone. 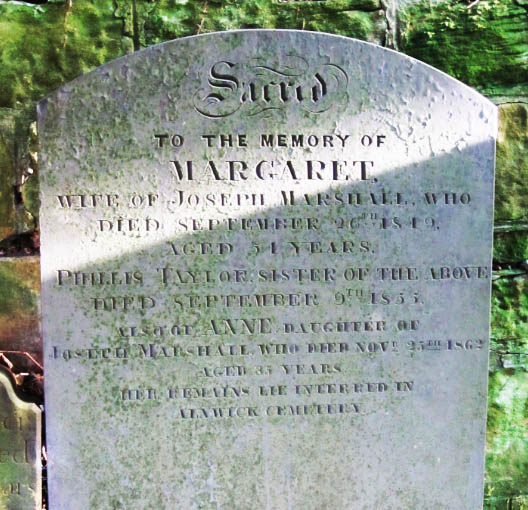 Joseph was a tallow candle maker/ seller at this time, according to the Newspaper obituary.

Two years later in 1851, Joseph was a widower living with his unmarried daughter, Anne, and was the Assembly Room Keeper (see image at the head of this article). This was a job which included a place to live, which was a bonus.

They were both still there in 1861 .Phillis had died in 1855 and Anne died in 1862 age 35. They were both buried in the new cemetery, but their names  were added to Margaret’s stone in St. Michaels.