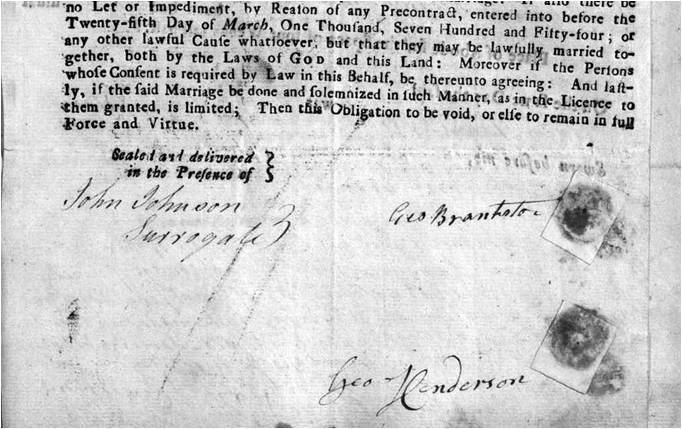 Above: The two fathers’ thumb prints on the marriage bond.

Jane was only 19 and George was 22 when they married in Alnwick. Both fathers, George Brankston and George Henderson (county miller) had to complete a Marriage Bond. They put their thumb prints on the sworn entry in the marriage register, on 31st July 1798.(See above))

We could only trace three children born to George Brankston, mis-spelled Brankstone and Jane mis-spelled Jean. These were:
George Jnr. baptised 14/7/1799 in Pottergate Church in Alnwick:(See over): Jean baptised 9/8/1801 and Michael Henderson baptised 2/4/1804, baptised in the same place. Jane’s husband, George died age 33 on 12/1/1808, so she was a widow for many years before she died in the Cholera outbreak, on October 6th. This was two weeks after her daughter-in-law Dorothy, died in the same outbreak.

George had his name in the newspaper several times saying about the quality of the livestock he had butchered, the quality of his meat etc; especially one Christmas when he slaughtered a prize-winning heifer grazed by the Duke of Northumberland, and was selling it in both his and Mr Straughan’ premises.(1836)

The Brankstons were living in Clayport at that time, and on the 1841 census, all the children above are listed apart from Margaret. George Senior was a butcher, and George Jnr. was an apprentice cabinet maker, like his great grandfather.

Mother Dorothy died of cholera on Sept 24th  two weeks before  grandmother Jane, who we assume was living with the family in 1849. Jane’s other son had been a tinsmith or whitesmith, in Alnwick but his business went bankrupt in May 1849. So 1849 was a disastrous year altogether for the family.

George died before the next census in 1861 and the family disbanded. Son William married a Sarah and became a railway signalman in Newcastle. By 1891 he was widowed and an inmate of Elswick Union Workhouse. He died in 1896 age 69.

Daughter Dorothy married John Hall, a quarryman, and had three children before they emigrated to Australia before 1864. Decima their four year old daughter died in Berrima New South Wales in 1867. They had at least four more children in Australia, and Dorothy died there in 1898, (See below)- a long way from where her mother, Dorothy died of cholera in Alnwick.

John, Dorothy & their sons John & Richard arrived in Keppel Queensland 12th July 1866, on the ship The Great Pacific.  All men on board were to be employed as labourers to work on the railways.

Daughter Decima was born on board the ship in June that year. However, once arriving they found that there was no work available on the railway. Decima died in the following year in Berrima New South Wales, which suggests that the family travelled south in search of work. From there they moved to the Bell / Lithgow region, west of the Blue Mountains. Im not certain of the work John carried out, but Lithgow was a coal mining area, so its possible that he & the children worked in that type of industry.

Hope this helps. If I come across any other useful information will pass it on to you/ Cheers,