Above:: Christening of two children of James and Mary La Roche

Isabella was only five, and Mary was 71 when they died a week apart, on 24th September and 2nd October 1849, respectively.

We assumed the two were related as Pickard is a fairly unusual name in Alnwick (but quite common in Warwickshire). This assumption proved to be valid-see below.

Mary was born in Alnwick as Mary Thompson, in about 1778 and married Joseph Pickard in St. Michael’s Church on 9th April 1797. He was born in Coventry, Warwickshire and baptised in Holy Trinity Church there on 26th April 1872. He was ex East Middlesex Militia, as recorded on some of their children’s baptism entries. Joseph left the Militia on 9/5/1798, when he was paid a shilling a day, after five years service.

There were no more children as Joseph died in Alnwick that year age 38. Mary was a widow age 32, with five children to care for. We found her name on the 1823 list of established poor in Alnwick and also under “ incidental poor”, because her daughter was ill, that year. (see below)

-Son Joseph married Frances Smart in 1820. He was a bricklayer from Canongate at the time their first daughter, Elizabeth was baptised in 1823, and a plasterer by 1825 when Thomas was baptised. He was still a plasterer, but living in Hotspur St Alnwick when Mary was baptised in 1827 and in 1829 when William Smart Pickard was baptised. Frances was born 1831 but died aged 2. Another Frances Smart was born in 1834. Their last two sons were the ones on the family gravestone who went to London, George 1835-1870 and James 1837- 1872. Frances was to become widowed in 1839 when Joseph died age 42.

-Daughter Mary married William Dodds on 24th May 1828 and by 1841 census they had two sons and were living in Hotspur St, Alnwick where he was working as a mason. Both their sons went to the Duke’s school. On the 1851 census son William was a teacher at the Industrial School. A young niece, Mary Ann La Roche (5) was staying with them. She was a daughter of Mary’s younger sister, Joan.

– Joan had gone to London and married William La Roche in St Pancras, a goldsmith. Mary Ann was back with her family by the next census and lived with her parents when William was a jeweller and then later with her widowed mother, until Joan died in Chelsea on 6/11/1892 age 82.

-Daughter Jane, born in 1805 gave birth to Isabella in 1844, and she was a single mother and 39 years old. She was living with John Hall, in Clayport.

So Mary and one of her granddaughters, Isabella both died in the Cholera outbreak of 1849. It was a sad end to a hard life.

Below: List of the poor and incidental poor of Alnwick. Mary was both! 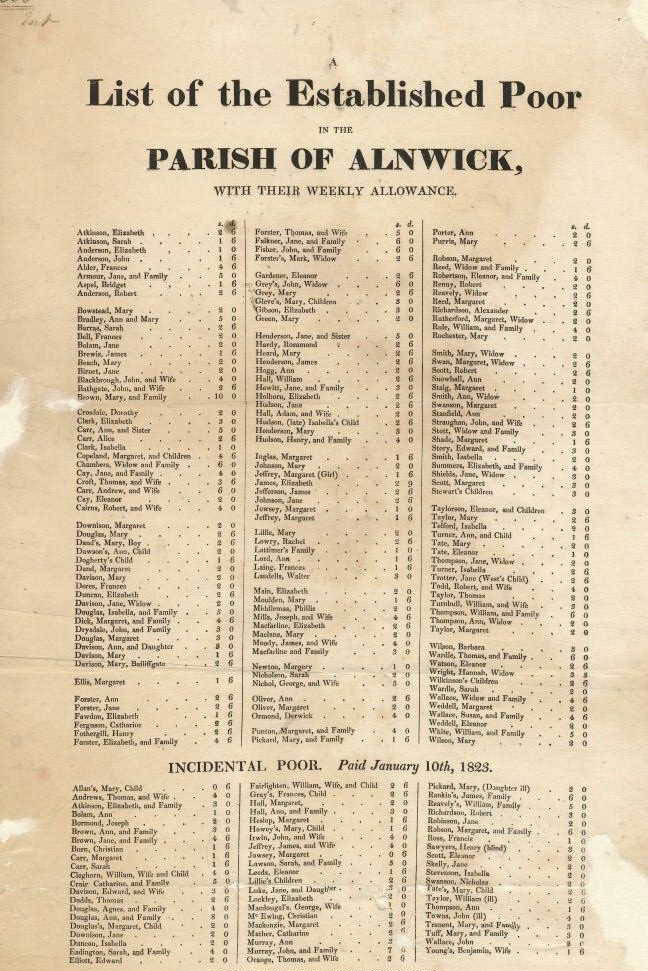