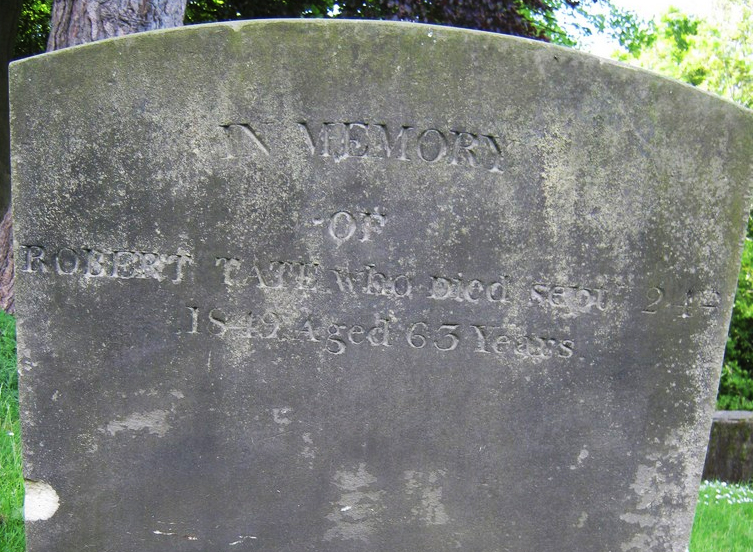 Robert Tate was born in Warkworth and baptised on December 21st 1788, son of John Tate.

Robert  married Isabella from Wooler and was a miller at Eastfield Mill, Warkworth. They lived there, when  daughter Jane was born in 1833. The place was mentioned on the 1851 census, and in the poll book for 1834, but by 1838 they had moved to Painters Hill, Alnwick.

On the 1841 census they were recorded as living in Canongate, (which could mean Painters Hill). Their family then consisted of
Robert Tate aged 50, miller. His wife Isabella, 40, and four daughters, Margaret 14, Isabella 12, Elizabeth 10, and Jane 8.

They had moved to Green Batt before the next poll record in 1847, and Robert is described as a freeholder. (He was also recorded as a grocer, not a miller). 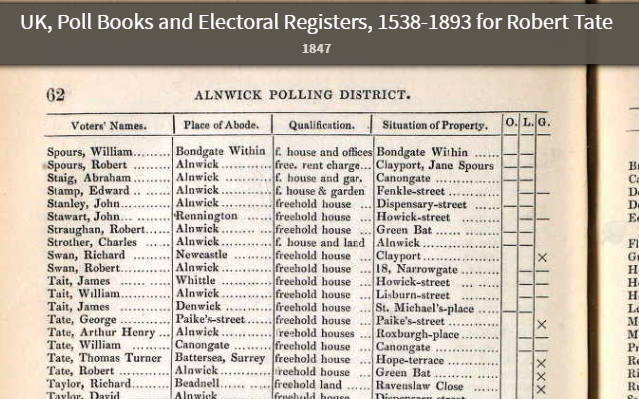 Robert died there on September 24th 1849, one of the first days of the outbreak. He has his own gravestone in St. Michael’s Church Yard (see above).

In 1851, Isabella was still in Green Batt and a shopkeeper, with her youngest daughter, Jane still at home. Jane was working as a (something) Maker (the entry is illegible), and confirmed that she was born at Eastfield Mill, Warkworth.

In 1861 Isabella was still in Green Batt with daughter Jane, now married to Andrew Bird, a tobacconist journeyman from Scotland.

Isabella died in 1881 aged 84. Blind, she was still living with Jane,  Andrew and their family of two sons and two daughters. They had, however now left Alnwick for Hamilton St, Newcastle where Andrew was a “tobacco spinner”.

Meanwhile sister Isabella had not married and was found dead at her house by a neighbour, in February 1889. (see newspaper cutting below).