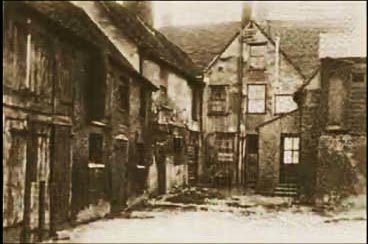 Elizabeth Jobson was born in Scotland about 1816. We believe that she was born Elizabeth Purday, although there is no firm documentary evidence for this. We do know that she married Nicholas Wright Jobson, who was born on the 6th October 1816, in Alnwick.

Nicholas and Elizabeth were married sometime before 1837 when their first child was born as they were on the census in 1841, for Hotspur Street. He was a tanner, probably at the tannery across the road in Hotspur Street. Besides a four year old daughter, Mary, there was another child James Robinson. age one in the house. Perhaps he was a relative but we couldn’t trace him.

Before her death in 1849 Elizabeth and Nicholas had at least four more children, but sadly their first born, Mary died at the end of 1845. The children were: Elizabeth born in August 1842 when they were still living in Hotspur and Nicholas born in February 1845: John William, born in June 1847 when they were living in Old Chapel Yard and Jane, born just before Elizabeth died.

Elizabeth was aged 34 when she caught cholera on the very first day of the outbreak, when her family was in Clayport. She was buried the following day in a mass grave at the rear of St Michael’s Church where all of her children were baptised.

Nicholas remarried in July 1852 . His new wife was Isabella Young, only 24 years old, born 1st September 1827 and baptised 7th October in the Scotch Church in Pottergate. She was the daughter of Thomas Young, a slater from Clayport. So she was a neighbour of Nicholas. Her family was living in Willoughby’s Bank Cottage in 1841.

By the 1861 census Nicholas  had moved to a Freemen’s Cottage on Alnwick Moor- Herd’s Close Cottage. Isabella took charge of the four children from Nicholas’ first marriage and they had three more of their own.

Nicholas Jnr and Elizabeth were “agricultural labourers”, probably working on Alnwick Moor, and John was a tailors apprentice by 1861.
Several more children were born to Nicholas and Isabella, including Andrew Young Jobson born in October 1861, William baptised 24/10/1863 and Eleanor baptised three years later on 1/10/1866.

Only Andrew survived and appears on the 1871 Census for Blyth’s Yard Clayport, so the family had moved back to the town. Nicholas Jnr was married by this time and was also a tanner living in Blyth’s Yard with his wife Catherine (Reagan) and a son. By 1901 he was a hawker and lodging with others. Also by 1871, John was married to Mary Ann and working as a tailor in Clayport.

By the 1881 census Nicholas and Isabella were still in Blyth’s Yard, Clayport and were in their 50s. Robert was (25) a cooper, James (20) was a slater, and their youngest, Andrew Young was a general labourer. He died later that year, in 1881, age just 17.

Nicholas died in 1888 almost 40 years after Elizabeth, his first wife.
On the 1891 census, James was still a slater now living in Hood’s Yard Clayport, with his wife Hannah (1866-1942) their three daughters, and his mother, Isabella.

By 1901 James was a general labourer, and no longer a slater. His mother had died in 1896, and their family had increased to five children. James died in 1903, age 43. Hannah was a widow for a long time first of all living with all her children in Dispensary Street and on the 1939 pre-war records she was living in St Thomas Close with her unmarried son James, a general labourer.

The other son of Nicholas and Isabella, Robert, in 1891 had a wife Margaret and four children but ten years later he was a widower and living in Union Court, one of the worst place in Alnwick. He died in 1930, probably in poverty