Above: Joseph and George, curriers in the 1850 trade directory

Mary Thew was about 71 when she died in the Cholera epidemic, so she was born about 1778. She married into the Thew family, which was a huge local family going back quite a few generations.

Edward was a butcher in the Market Place, Alnwick. An area of the marketplace was made up completely of butchers and was called the Shambles. These butchers slaughtered the animals there, on site, so it must have been disgusting, awash with blood and dung. The area was improved in 1827 with the building of the Northumberland Hall with shops underneath, but still called the shambles. 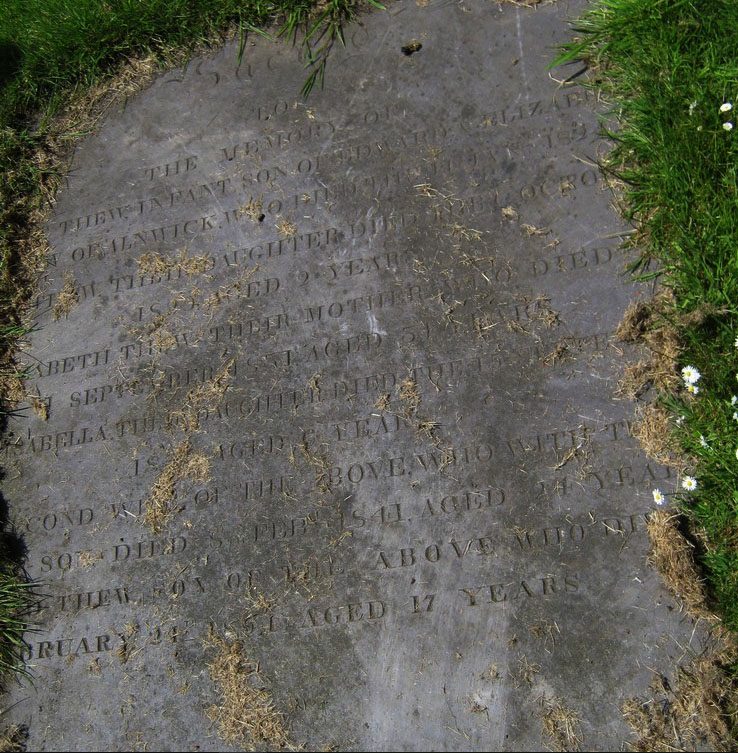 Above: A Thew family gravestone, unfortunately no longer upright.

The Thew brothers were obviously hard-working, becoming tanners, grocers, ropers and brewers, Freemen of Alnwick and prominent members of Alnwick community. Joseph married a Mary Stanfield. We think the marriage took place in Holborn, London, but this may be the wrong Joseph. The wedding details say both bride and groom were residents of London, but this record is the only one we could find, for a Mary Stanfield and a Joseph Thew, in 1801.

On the 1841 census for Clayport Mary and Joseph, ages rounded (as were all adult ages in this census) to 60 were living with just Jane at home, age 20, and still single.

Mary died on October 5th from cholera. Her sister in law Elizabeth Thew died two days later, but this is not recorded as from cholera.

In 1850 and1855 Joseph advertised in the directories as a currier, so he was still working.

In 1851 Joseph and two unmarried daughters, Hannah 32 a dressmaker, and Jane 30 a milliner, were still living in Clayport. There was no trace of Isabella. On the 1861 census they were missing but we know Joseph died in January 1862 age 85.

His daughters Hannah and Jane did not marry so there were no more Thews from this line.