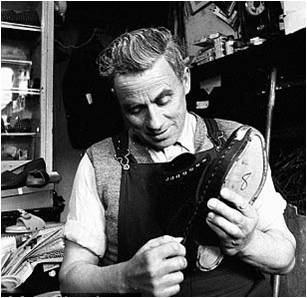 A traditional British clogmaker like Aaron and his father

William Howey was only 11 years old when he caught Cholera and died on the 29th September 1849.

He was the fifth child of James and Mary Howey, with all their children born and baptised in Alnwick. James (from Alnwick) married Mary Gair of Morpeth, in St Michael’s Church on 18th February 1826. Their witnesses were Mary Horsley and Cuthbert Burnett. A year later their only daughter, Isabella was baptised on 14th February 1827. Her father was already a clog maker, living and working in Clayport Street.

Their second child was called Aaron (1829-1899), baptised on 1st March 1829. Another Aaron Howey was baptised on 15/8/1830 the second son born to Mary Howey, spinster. This led to much confusion in the records between these cousins with the same name, although the second Mary’s Aaron was born nine years before, on 11/4/1821 and baptised in the Ebeneezer Meeting House in Alnwick.

On the 1841 census for Clayport, James and Mary were both in their 30s. Aaron was 12 and an apprentice clog maker, James 5 and William 3. Isabella was 14 and working as a house servant in Clive Terrace, just a few hundred yards up Clayport.

William died eight years later when the cholera outbreak struck Alnwick, and was buried in a mass grave at the rear of St Michael’s Church. Clayport was the worst affected area.

By 1851, James and Mary had just two sons at home. James Jnr was then 15 and an apprentice clog maker, and George was just 3. In 1861, only George was at home with his parents, who were recorded as living in Mr Burn’s Yard, Clayport. In 1871, James and Mary were both in their sixties and alone. James was given a pay rise, the following year, of 12.5%. Which made the papers!

James  died on 7/12/1878 age 77 having worked as a clogger for Mr. T Burn for more than 54 years. James was “much and deservedly respected”. Two months later Mary advertised her furniture for sale on leaving Alnwick.