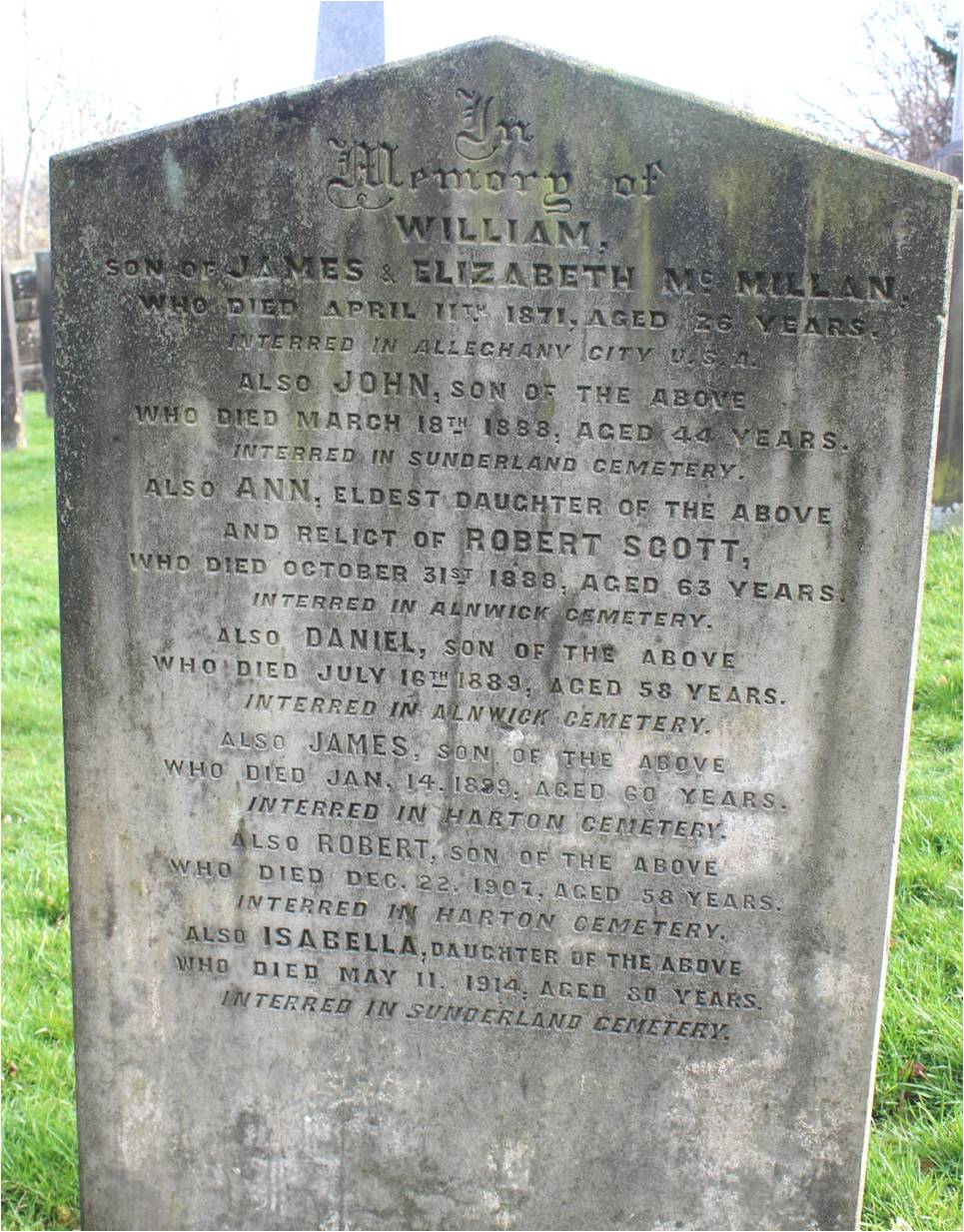 Above: The excellent quality second headstone listing all other family members.

James McMillan died on September 29th at the peak of the cholera outbreak. He was a mason famous, in Alnwick and beyond, in his lifetime as stated in his obituary written much later. All his sons apart from Robert followed is his footsteps.

James was born about 1803 in Scotland. He married Elizabeth from Spittal, born in the following year. They had seven living children by the time of James’ death in 1849. Ann (1825),  John (1827) died an infant, Daniel (1830) and Isabella (1834) were all born in Spittal, Tweedmouth. Their births were all registered in the non-Conformist chapel there.

On the 1851 census, Elizabeth appears as a “mason’s widow” aged 46, living in Clayport with all five sons. They were aged from 20 yrs to 18months. She must have found it a struggle to cope. Her daughter Ann had already married Robert Scott in1846, in Alnwick. He was a hairdresser in Clayport Street , the son of a draper. Isabella was a 16 year old servant in the household of Henry Atkinson, a Brewer in Bondgate Within at the time of the 1851 census.

In November 1860, James Jnr, as an ‘old boy’ carried the biggest flag at the Dukes school jubilee celebrations. All the brothers attended the Dukes school, most leaving when they were 14 years old.

By 1861,  James Jnr had also left home. He had married Mary Percy in 1858 and they were living in Bailiffgate where he was working as a mason, like his father before him. He later moved to Gateshead. In 1877 his name was in the paper, being involved in a drowning accident.(See later).He often placed adverts in the local paper, when he became the district surveyor in the 1890s, in Hebburn. (See over) and was presented with a “timepiece “. In 1861 Daniel, John, William and Robert were living in Pottergate with their mother. By 1871, Elizabeth was living alone back in Clayport where she died in 1879 aged 75.

William died in 1871 aged just 26, rather than two years old as it says in James’ obituary. Daniel was still in Alnwick, in Clayport then he bought the freehold of a house in Dispensary St. and lived there from before 1871 till he died on 16/7/1889. He was a monumental sculptor and became quite well known. 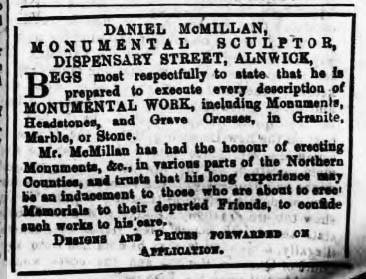 William’s  brother John was also a mason. He married Isabella ( Bowmaker) and they moved to Bishopswearmouth, Sunderland, where their daughter -also called Isabella was born in 1866. Their son, another James also became a mason as recorded on the 1871 census. John’s sister, Isabella also lived with them as a housekeeper. It must have been confusing with at least three Isabellas!   John died in Sunderland in 1888, and his sister died unmarried in 1914 aged 80.

His brother John was also a mason. He married Isabella ( Bowmaker) and they moved to Bishopswearmouth, Sunderland, where their daughter also called Isabella was born in 1866. Their son, another James also became a mason as recorded on the 1871 census. John’s sister, Isabella also lived with them as a housekeeper. It must have been confusing with at least three Isabellas. John died in Sunderland in 1888, (See over) and his sister died unmarried in 1914 aged 80.
Robert was the only son to become a joiner, not a mason. Robert married Elizabeth Hannah Hindmarsh in Gateshead on 24/1/1878 and died there in1907.

The whole family is recorded on two head stones in St. Michael’s Church Yard. One was for James, and then later his wife Elizabeth was added. This  was beautifully carved by family members. The second (at the head of this article) lists the off spring of James and Elizabeth in the order of their deaths, so it must have been produced by a grandson.The first son to die and so came top of the list, was William born in 1845 and died 26 years later in Alleghany, Virginia, USA 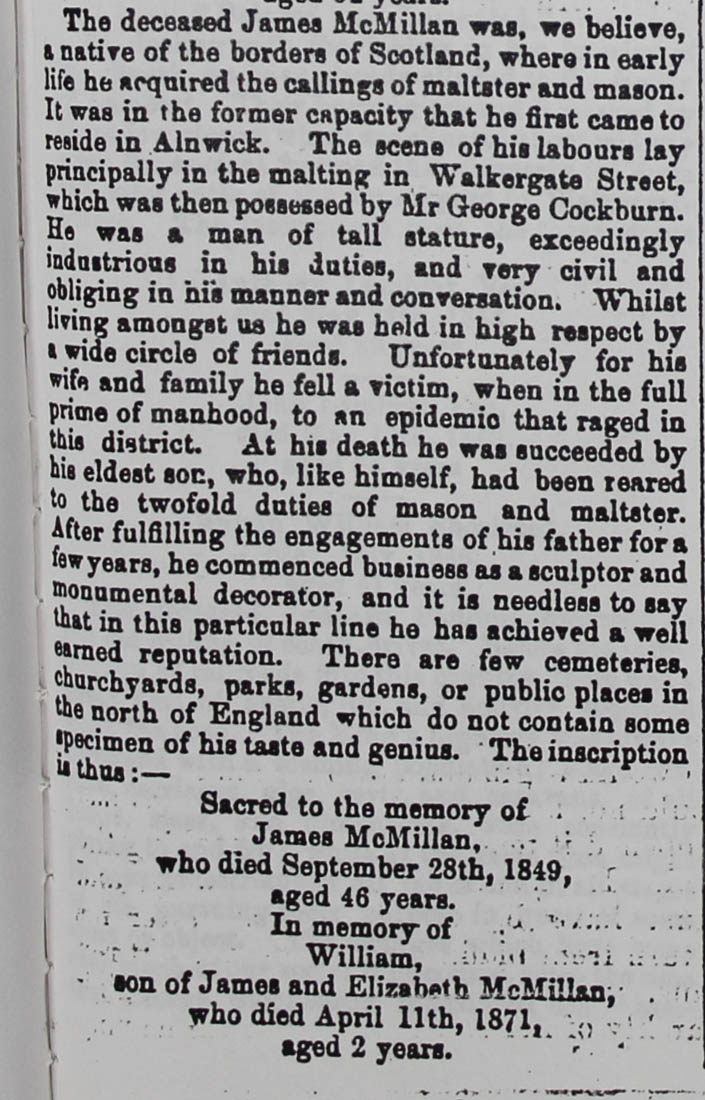 Above: The obituary to James, who on the Rawlinson records died on September 29th 1849