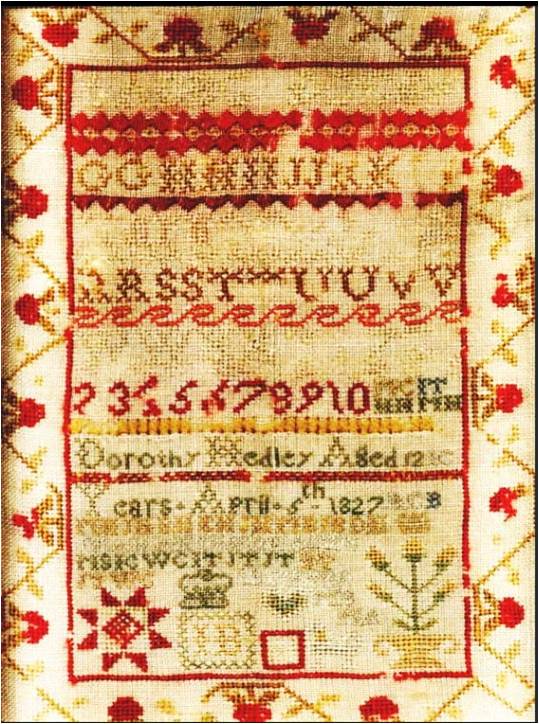 Henry was the third child of six born to James (1751-1788) and Dorothy (Dinning) of Ellingham.(1754-1798). Henry was baptised in the non conformist Church on 20th March 1788. He became a joiner, and moved to Alnwick where there was work due to the amount of building work going on at that time. He met and married Mary Blackborough the daughter of John, a carter. She was one of twins both baptised on the 9th October 1792.They were married in St Michael’s Church on the 1st August, 1813. The bride signed with a cross.

Their first daughter, Dorothy was born the following year and later married William Addison, moving to Newcastle to live. She produced a sampler in 1827, when she was 12 years old which has been passed down through the generations (see above for an image).

On the 1841 census , Henry was still a joiner, now living in Howick Street, with wife Mary, and daughters, Mary 20, Eleanor 11 and 8 year old Margaret. This area was then newly built and there were only a few houses at the bottom of the road, which was still being constructed up the hill. So there was plenty of work for a skilled joiner.

Mary and Henry were living around the corner in Green Batt, when the cholera outbreak struck, with Margaret then just 16 years old left parentless.

Eleanor married a year later, in 1850, to a printer/ compositor Charles McLean and by 1851 they were living in Gateshead. Having no sons, only daughters there was no one willing to carry on the family joiner business when both Henry and Mary died of the cholera in 1849. They were buried in a mass grave,with no headstone, in St Michael’s church yard.