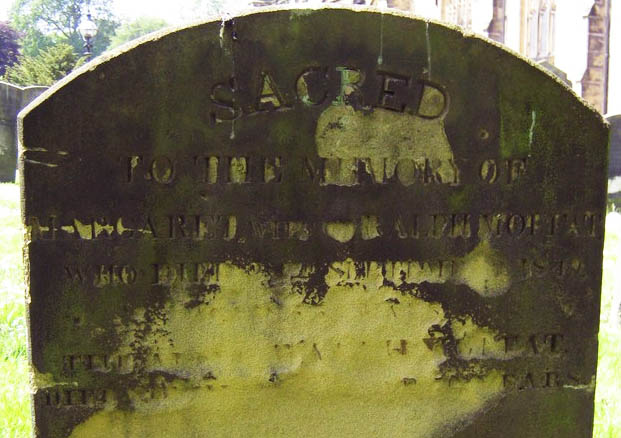 Margaret Moffit (also spelt Moffatt and Moffat) died on the first day of the Alnwick cholera outbreak, September 23rd 1849.  It was reported in the Newcastle newspaper that she was 53, and the wife of Ralph Moffatt, a mason.

Margaret was buried in a marked grave at the front of St. Michael’s Church, but her stone (above) has weathered  so badly that it yields little useful information, apart from confirming her death in the period of the outbreak.

Two years after her death, Ralph was lodging with the Balmbra family, who ran a grocer shop in Clayport, near where he had always lived. Mary Balmbra was the widow of John Balmbra from Hobbelaw, and had three grown up children living there too. Mary had been born in Bamburgh but died in Alnwick in 1858.

In 1861 Ralph Moffatt was still lodging with the Balmbra family, but he died on 19/11/1869 , twenty years after his wife Margaret had died from cholera.