A sad end to the whole family.. 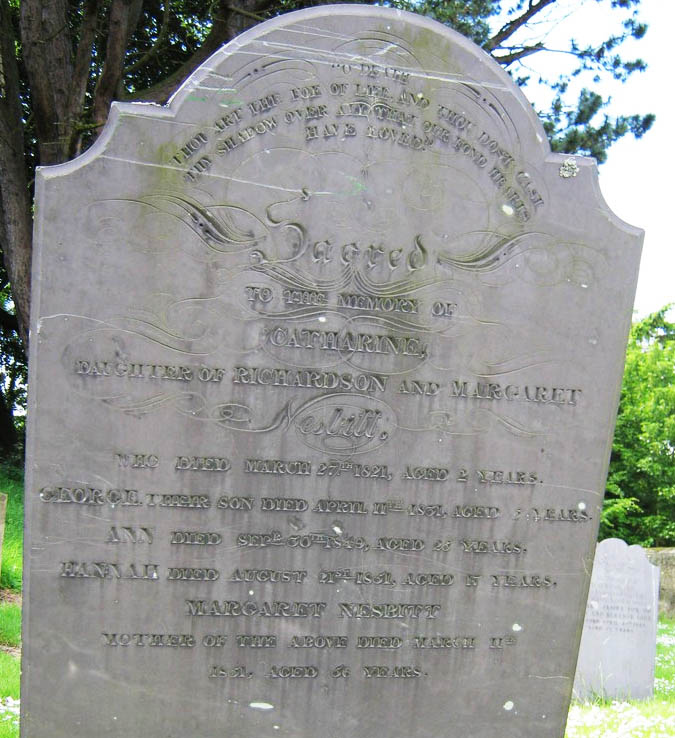 Ann was one of the daughters of Richardson Nesbitt and Margaret Guy. They were married in Alnwick on 23rd June 1820. Richardson  was born in 1797, in Lesbury to Christopher Nesbitt (1748-1797) and Ann Richardson (1759-1798). He was the youngest son, as both his parents had died within a year of his birth. We don’t know anything about his early life, who he lived with etc, but he trained as a shoemaker and moved to Alnwick.

Richard and Margaret had several children who died young and others with the same names, leading to confusion. He must have been a successful shoemaker, as he had a beautiful headstone erected for his first daughter, Catherine who died age 2 on March 27th 1821. Others were added to the stone at a later stage, including a George, Ann and Hannah.

On the 1841 census for Paikes Street, Richardson was a 45 year old shoemaker with his wife Margaret, George had died in 1831, so Ann was the eldest at 15, another Catherine was 12, another George was 8 and Hannah was 6, but died at 15.

When Ann died from cholera on 1st October 1849 her name was added to the headstone, followed by Hannah, then their mother both in 1851. Richardson just had George and Catherine left. Neither married and lived with their father through several moves, from Paikes Street, to Narrowgate and then to Fenkle St . He and George were both boot and shoe makers, employing other men. George died next in 1875, Catherine died in 1879 and their father was the last to die on 13th March 1881. He left £60 18s in his will but had no family to leave it to. A sad end.