Did you grow up in Northumberland and can you remember all those songs you learned from other family members? The songs you sang in the playground and while you played outside? Are they still being sung? Have they disappeared?

In 2013 six local First Schools worked with traditional singer Avril Huntly and local singers, choirs and families were interviewed to archive their memories and keep alive our musical heritage.

A DVD of the project including material from the school sessions, interviews with local people and a record of the village tour and Ceilidh is available to view at the Museum. 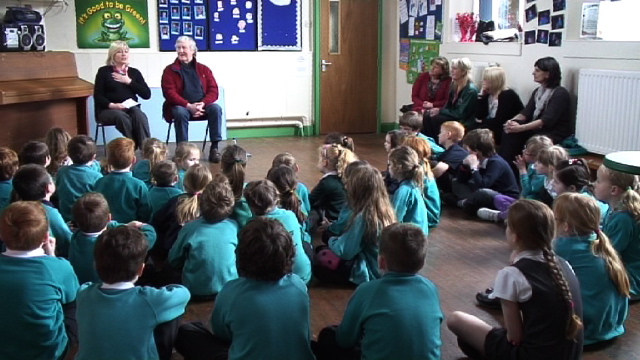 Taking Our Singing Heritage to the pupils of Thropton First School

The project “Our Northumbrian Singing Heritage” had the aim of identifying and preserving the local songs of our childhood that are at risk of becoming long forgotten. It was funded by the Heritage Lottery Fund All Our Stories programme. We were awarded £10,000 to preserve and celebrate a key part of our Northumbrian musical heritage and our unique dialect.

All Our Stories was a small grant programme, launched in support of BBC Two’s “The Great British Story”, and was designed as an opportunity for everyone to get involved in their heritage. With HLF funding and support, community groups carried out activities that helped people explore, share and celebrate their local heritage.

The popular series, presented by historian Michael Wood and supported by a programme of BBC learning activities and events, got thousands of us asking questions about our history and inspired us to look at our history in a different way through the eyes of ordinary people.

*Avril Huntly was the singer leading the project collecting songs and passing them onto the next generation..

*Harry Henderson was the film maker who worked with volunteers to record and archive the songs and make a DVD of the project and celebration day.