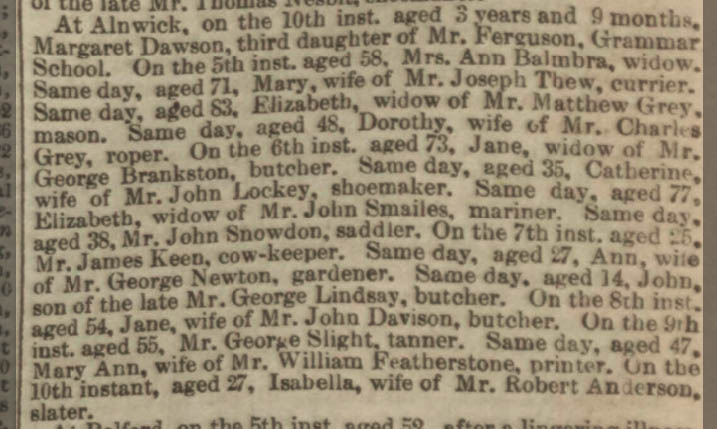 James had been baptised on 28th May 1826 in Rock, north of Alnwick, in the Presbyterian Chapel. He was a farmer’s son. Father Joseph Keen and mother Jane were tenant farmers at Rock South Farm. On the 1841 census Joseph and most of his children had moved to another farm near Edlingham. Recorded were Joseph and Jane both 50, Thomas and Matthew both 20, James and Catherine both 15, Jane 13 and Elizabeth 10. (NB. Their ages were rounded up in 1841 so there were no sets of twins).

Joseph was farming at Broomhouse Farm, and paying ‘above £50” a year rent as occupier.What made James leave to set up on his own as a ‘cow keeper’ and living in Clayport, Alnwick, we do not know. Perhaps he had met Margery.

The name Margery was very rare in the 19th century and after investigating several potential candidates we decided on Margery Mills. She had been baptised in Rennington, (the next village to Rock) in 1824. On the 1841 census she was a house servant in the village of Bockenfield. A Margery Mills was married in December 1846 in Alnwick, but nowhere could we find who she married. We do know, from an obituary in the Newcastle Journal on 6th October 1849, that both Margery and James had died within the same week, in the cholera epidemic and were buried together. 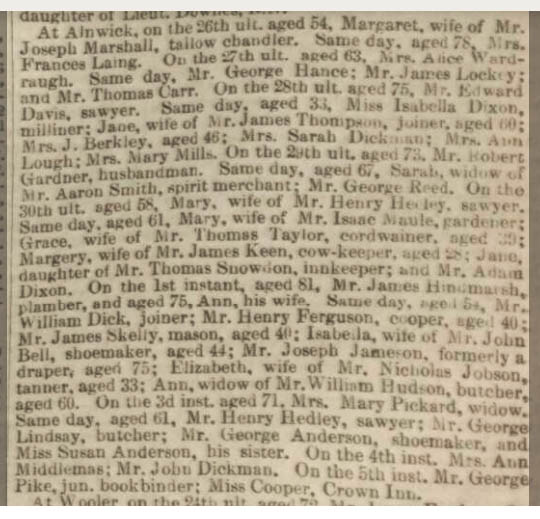 Margery in the Newcastle Journal

Joseph and Jane Keen were on the 1851 census for Shilbottle on a farm of 30 acres, with one of their sons, Thomas 36, who had been born in Alnwick, and their daughters Jane, 21 born in Rock in 1829, and Elizabeth 19 born in Broomhouse, so confirming that they moved about quite a lot. Wife Jane was born at Birchwood Hall and was born an Atkinson, as her mother Catherine was living with them.

The other sons carried on the farming tradition, William and his bothers Thomas and Edward (born 1815) farmed at Eshott near Morpeth. Matthew was also farming 315 acres near Shilbottle. His descendants still farm at Loaning Side, Allendale, Hexham.