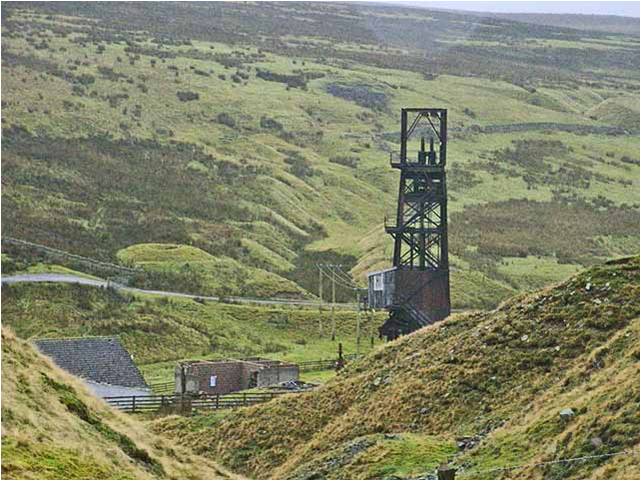 Above: Remains of a lead mine near Allendale

The only suitable Thomas McMillan born about 1828 appears to be one from Allendale, near Hexham. This Thomas was born to George and Mary McMillan, along with a sister Hannah and brothers Robert, Emmerson and Harrison. George and three of his four sons, including Thomas, were working in the lead mines in Allendale.

It was dangerous work and some workers also died of lead poisoning. Perhaps Thomas left the mine for a better life and came to Alnwick, on his own, tragically only to die in the cholera outbreak on the very first day, September 23rd 1849.

Thomas was buried hurriedly in a mass grave at the rear of St. Michael’s Church, on the 26th Sept 1849. The rest of his family stayed living in Allendale, at Stripe House in the High Forest near the Allen river.

On the 1851 census there was more information. George and Mary were now both 52, and he was still a lead ore miner. Robert had married and moved to Caple Shaw, George Jnr ( not at home in 1841) was 21, Emmerson was 19 and Harrison was 17. The whole family had been born in Allendale. There was a 4 year old grand daughter Mary- Ann also living with them, and a servant.

In 1854, son Emmerson married Hannah Philpson in St Peter’s Church, Allenhead and by 1861 he had become a joiner and moved to Jarrow. He died there in 1872 age only 41. Also in 1861 son Robert was now 36 and an ‘excavator’, probably in the lead mines. He had a wife, Mary and five children, but she was to become a widow the following year.

In 1861 Harrison was still living in Stripe House with his mother, Mary now 64. Granddaughter Mary Ann was now 14. His mother died in 1870. Harrison married in 1862, to Ann Philipson . They were to have four daughters in the next ten years but Ann died in 1870.

By the 1871 census Harrison was therefore a widower with four young daughters. In 1881 he was no longer working in the lead mines. He was now a farmer and two of his three daughters were dairy maids. His youngest daughter Emma, died age 6, in 1876.

Harrison lived until 1888 and died in Allendale age 54.

George jnr by 1861 was still a lead ore miner age 32. He also had married a Mary (Hewitson) and had three children. By 1871 the family had moved to Stanhope in County Durham, and the number of children had risen to seven, including another Emmerson age 1. George jnr was now an iron ore miner. George jnr was to die in 1877, leaving a large family with little income.