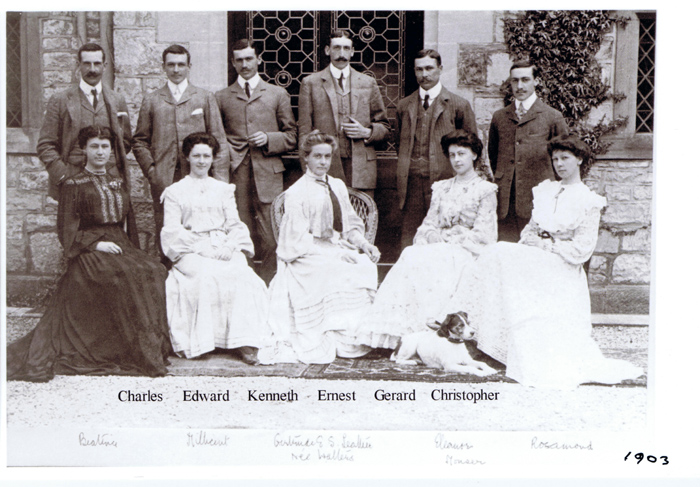 It was the first time that Earl Percy had brought his new bride Lady Edith Campbell to Alnwick since their wedding Ref 1. The Earl his new wife stopped in front of Belvedere Terrace and the residents were out on their balconies. There was “Waving of hats and handkerchiefs by persons situated on balconies of Bevedere and the gardens adjoining scarcely ever ceased during the whole time that the carriage was in sight. “

The nearest neighbours to Belvedere were more substantial houses built along the Alnmouth Road in the 1830’s. These houses were Alnbank House, once home to the HIndhurst family, and Freelands, home to the Paynters, both of whom were solicitors. The Oak Public House was also recorded in the 1861 census as being there (See ordnance survey 1851). Hill Crest at the start of the 1900’s was home to Charles Percy a solicitor/coroner.

Ravenslaw, which became the home of the Hardy family, was built in the late 1800’s and is situated to the left of Belvedere. It stood in substantial grounds and is now an Abbeyfield Residential Home. In the mid 1980’s Nomad built a number of houses in the grounds. These have now changed hands to become owned by I.S.O.S. housing association.

Number 5 was divided into two houses in the late 1920’s and the original coach house has been a veterinary practice but is now a private house. There are also connecting doors between some of the properties which are still in evidence but the reason for them is unknown. It is thought that they may have been used as offices for the Duke of Northumberland’s Estate Office.

During the period of 1847 -1911 Belvedere was the home to a cross section of Alnwick society.

Thomas Tate, William Dickson (junior) and William Forster, all established solicitors, lived in Belvedere.  Thomas Tate moved on from Belvedere to Allerburn  (now  Northumberland  Planning Office) where he had a large staff of servants.  Arthur Thew, the son of a John Thew a wealthy merchant, and Dr William Davison, the son of William Davison the printer, also made their home there.  Belvedere also had the landed gentry in the form of Charles Riddell, a gentleman born at Felton Park, Winifred Haggerstone, Miss Isabella Cooke and Major Gerard F T Leather of Middleton Hall. Their families owned large Northumberland estates and as children these had been their childhood homes.

Others can be traced through Burke‘s peerage e.g. Herbert Sanderford. The emerging professional class of the era were represented by William Percy, a draper, J.Candlish Ruddock, an artist/ photographer, James Heatley, a tabacco merchant and Frederic Skinner-Jones, Head Teacher of the Duke’s school who all lived in the Terrace. There was also a strong military connection with the Northumberland Fusiliers. Major George Craster Lambert, Major Gerard F T Leather and the sons of John de Cambourne  Paynter all saw service with the Fusiliers. Their stories reflect their time with service in India, Africa and on into the First World War.  Newspaper accounts of the period record the residents involved in various charity works at the Ragged School, work house and soup kitchen. This was mainly undertaken by the ladies whilst the professional gentleman were represented on all of Alnwick’s local committees such as the Local Board of Health, Work House etc.