This property was built together with number 40, between 1873 and 1881 but since the houses we are not numbered to start with, we are not sure about the first owners or tenants.

We did find a birth announcement, however, in the Alnwick Mercury : “ At 38, Howick Street on 25th inst ( October) 1889 a son to the wife of James Staig “. This was Robert Staig born to James Abraham Staig and his wife, Jane. They must have been one of the first if not the very first owners of this house as James was in the 1889 Alnwick Polling Register, for this address. James had married Jane Alice Cuthbertson in Newcastle by special license on 3rd March, 1877 as they were both underage. They had to be 21 to marry in those days, but he was 20 and she was only 18 years old. He had probably met her while serving his tailor’s apprenticeship in Newcastle. 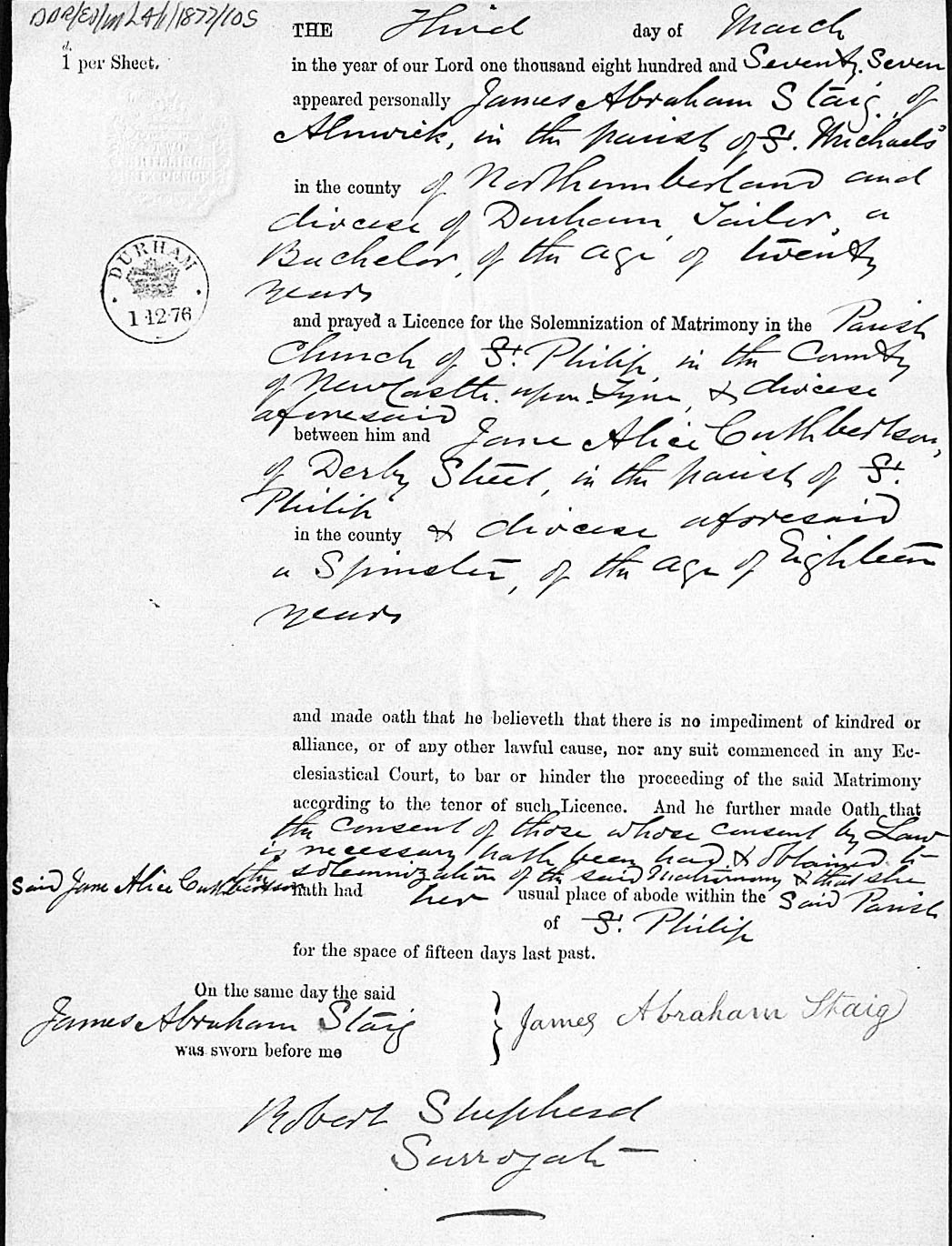 From 1882 to 1884 the Staigs were living in the Newcastle area where James was working at home as a tailor’s cutter.( In Kelly’s directory for Newcastle for 1886.) So, between then and 1889 they moved to Howick Street, leaving again before the 1891 census when the house was empty. In 1894 this court case was reported in the Morpeth Herald, but having read it several times, we have no idea who won and neither did the reporter! 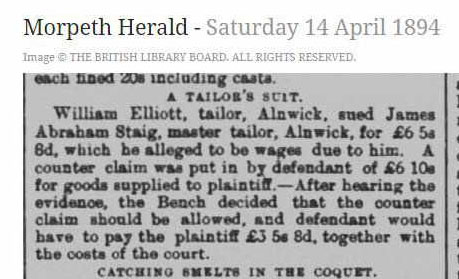 By the next census in 1901 they were living ‘above the shop’ at 20, Fenkle Street. James was then a merchant tailor with his own business. They were still there for the 1911, and Robert was the only son at home. The census records that the Staigs had five children altogether, although three had died young. The following year, 1912, James sold his business to William Wright, who put an advert in the Alnwick Mercury on 20th April, informing customers that the business was under new management. Jane died in 1923 and James died two years later.1891 was the first census where the Street was numbered. Cuthbert Burnett was living next door at number 36.  In fact he was in the same house for all the census returns from 1871 to 1911, so it helped to work out the numbering, but no number 38 appeared on the 1891 census, so we assume it was empty.

In 1901 Ralph Straughan and his wife Eleanor were living in number 38. They were both born in Alnwick, He was born in 1863 and Eleanor nee Davison was born three years before in 1860. Eleanor was a daughter of a farmer at Heckley Fence. Ralph was the second son of John Straughan, a farmer of Whitehouse farm Hulne Park, and his wife Jane. They had two sons and five daughters altogether, before Jane died in 1885. They were farming 273 acres of the Duke’s land, mainly sheep. On the 1881 census John’s unmarried younger Brothers, another Ralph and James were living with the family as “indoor farm servants”. John employed others to work on the farm.

After their marriage, at the end of 1895, Ralph and Eleanor moved to Howick Street when he was working as a sawyer, possibly in Hulne Park for the Duke. They didn’t have any children and were still in number 38 for the next census, which revealed that he was then a sawyer in a fishing rod factory , possibly Hardy’s. They lived at number 38 until Eleanor died at Broxfield on 17/1/1922. This was, and still is a farm, north of Alnwick, belonging to a family member. Ralph then moved across the road to number 35, living there until his death in 1937, age 74. So they must have been happy living in Howick Street. 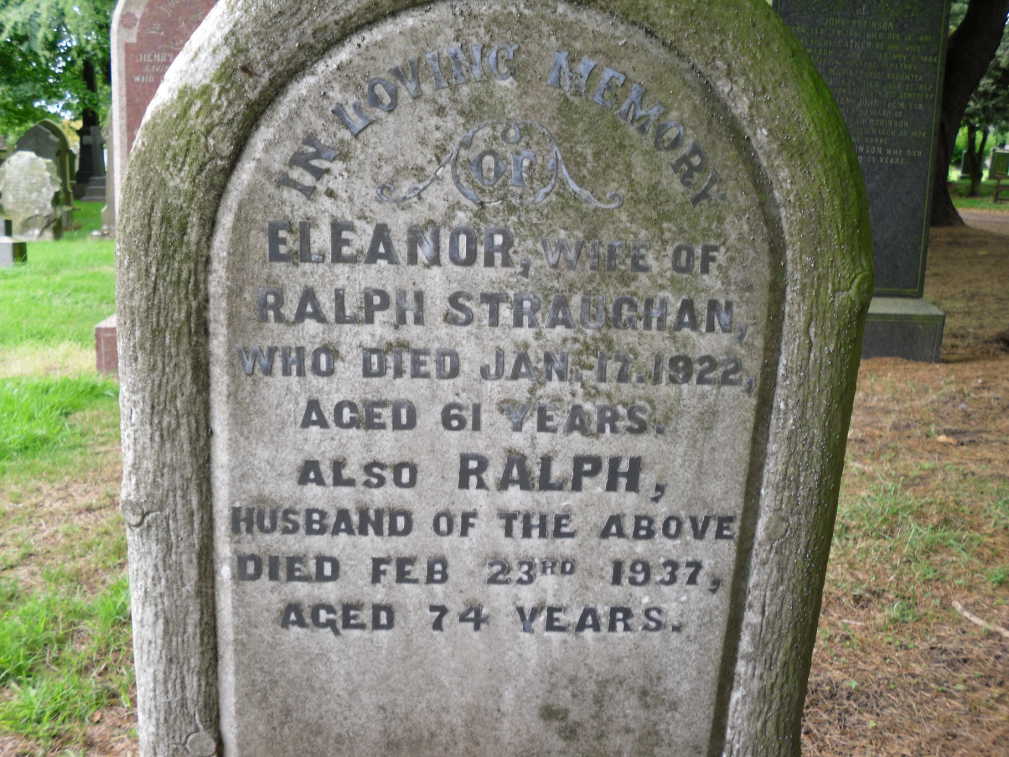 On the next census available, the pre war record of 1939, James Hall and his wife Lily were living in number 38, with their three children. James was a 45 year old precast concrete maker, born in 1894, and Lily was six years younger. Lily Ashburn was born in Alnwick in 1900, and was baptised Janet Lilias like her mother, who was from Comrie in Scotland. Lily was the youngest of five children born to Robert and Janet  Ashburn, who in 1901 were living with their five children in a two room tenement at 29 Howick Street. Robert was a coach body builder, working for Maule’s coach works, at number 2 Howick Street.( now number 3) By the 1911 census this family was living in Nag’s Head Yard when Robert had moved with the times and was then a “coach and motor body maker”. We also learnt that Robert and Janet had 8 children altogether although two died young.