The Demographics of Howick St

The population of Howick St rose more than three-fold between 1841 and 1911. This was mainly  the result of a continued programme of house building as the street was extended from what is now called Green Batt up the hill southwards.

Building began in the 1830s and by 1841 there were 11 households. From 1883 building was completed by the extension of the street westwards as Armstrong Place ( named after the builder), the houses above this known as Beaconsfield Terrace already having been completed.

Women were always in the majority during these census years. Although census data for 1921 is not yet available the effect of the First World War would be expected to continue this trend.

Note that although the census data below did include the listing of servants even from 1841 these were not a  major influence. In the main this constituted one -generally female- servant per household where present. Grove House (next to Green Batt on the west side of Howick St) on the 1881 census, however had become a school for young ladies with 12 female staff and pupils, so this did increase the percentage of females in the street even more. 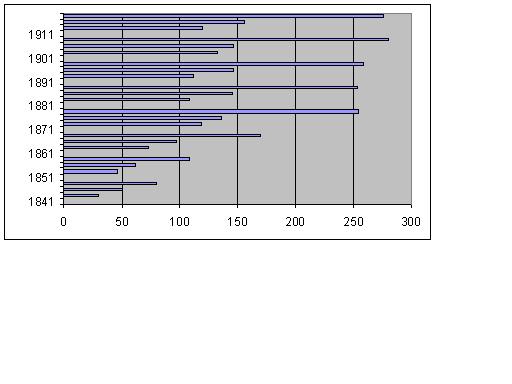 Numbers of children rose sharply in the mid 1800s with some houses holding several large families. This is a pattern repeated in developing countries nowadays. When child mortality was high, families with 5 or more children at one time were commonplace.( births often replacing losses). For example in the 1871 census  Robert Davison had 7 children, Thomas Gibb his neighbour had 9 and  James Smart across the road had 7. 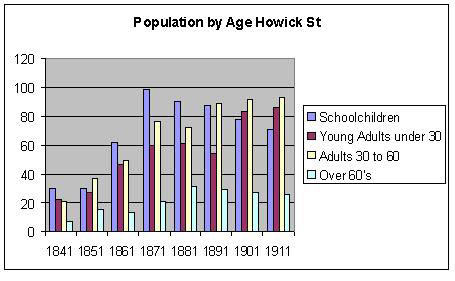 In the later years those aged 60 or more tended to be what was termed “annuitants” (ie living on savings) . The more wealthy of these tended to have one servant or a companion. Cuthbert Burnett in 1911 was retired on an Army pension at the grand age of 98 and living with two unmarried daughters.

Included in the category of young adults were those who had left school and were working, even those aged 15 or younger. Examples include Alice Mann who in 1881 was a servant aged 13.