By the 1870s, Howick Street extended up on the west side as far as number 34.

On Saturday January 22nd 1870, in the local paper it stated that “Plans were submitted for a new house which Mr Cuthbert Burnett is about to erect in Howick St. He was then living in Clive Terrace, Alnwick. 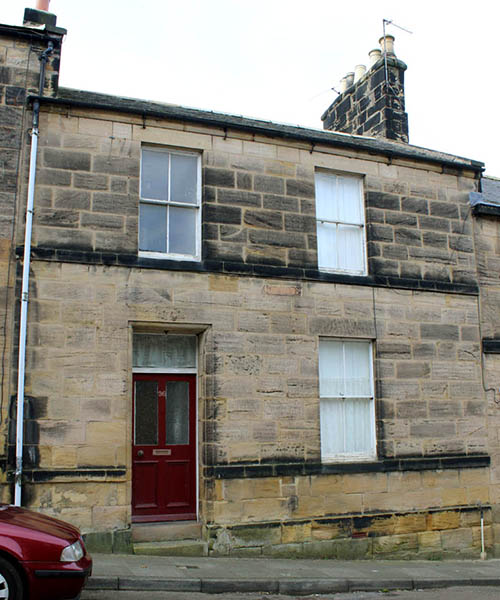 By the 1871 census Cuthbert Burnett was living there with his wife Isabella who was aged 62. He had been born into one of the large Burnett families of Alnwick. His father Thomas ( 1767-1839) was in the militia when Cuthbert was born in Kilkenny Ireland on 19/12/1812. Cuthbert was the youngest of 5 siblings, the first three were born in Alnwick and sister Jane was born in Sussex in 1809. On the 1841 census Cuthbert was living with his widowed mother Ann ( nee Sword) in Clive Terrace, Alnwick.  He was also in the militia, as  a Staff Sergeant. In the 1879 Kellys Directory he was listed as a tailor in the business section. Isabella died 1n 1873 recorded in the paper as “wife of Sgt. Cuthbert Burnett of the Northumberland Light Infantry Regiment of Militia”.

On 18th April 1874 Cuthbert remarried. He was married in St Pauls Church to Miss Barbara Davison. Another advert in the paper gave details of a daughter born 2nd July 1875, when Cuthbert was 63 years old. In 1879 he advertised No 36 to let, but obviously had no takers: 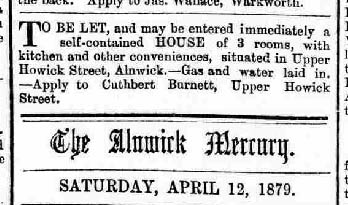 By 1881, Cuthbert was 68. His second wife was Barbara, aged 48, with  daughters Anne aged 5 and Barbara, aged 4. His sister Jane was living with the family. She was a 72 year old former laundress. Cuthbert was still entered as Staff Sergeant in the Militia In 1882 he was on the committee of the working mens club with a neighbour, Charles Nettleship. His wife Barbara had died, and he was married again, for the third time in 1890. He was 78 and his bride Isabella Dickson was 55 .The children, Anne and Barbara were now in their teens, and he was living “on his own means”.

By 1901, Cuthbert was 88 and was (retired) Sergeant in the Militia. Isabella, Anne and Barbara were still at home.

In 1907 a party was arranged for his 95th birthday

By the 1911 census  Cuthbert was still there! He was now 98 and outlived all his wives including Isabella. His daughters were still unmarried and “at home” and in their 30s.  In fact Cuthbert died later that year and left £577 in his will.

His daughters lived together in Elmgrove, 35, Swansfield Pk Rd where they died. Ann died in 1921 aged 46.  Barbara lived on alone till 1960.

Cuthbert Burnett lived in number 36 from when it was built until he died there in 1911.  The next people we are sure of, 19 years later were the Applebys. William H and Mary Ann Appleby (nee Jeffrey), born in 1891 and 1888 respectively. William was baptised on 8/8/1891 in Alnwick, with parents George and Catherine. His younger sister Beatrice was born in Yorkshire two years later and by the 1901 census the family was in Cullercoats, Tynemouth, where George was  gardener.

William and Mary were married at the beginning of 1913, in Alnwick. William was actually born lower down the street at number 28 Howick St in 1891. He moved away with his parents, but returned to Alnwick, to live there for the rest of his life in number 36.  William Hall Appleby went off to war, joining the Royal Field Artillery no 156525 as an acting bombadeer according to his record card and A/RQMS as on his medal roll when he was awarded the British war medal and the Victory Medal, in 1920. By the time of the next war they were still in Howick Street, and William was a foreman in “Steel buildings construction “. They were still living in the same house in 1947 when William died, aged just 56. Mary Ann lived on until 1976, when she also died in the same house age 88.