In 1841 the property we believe to be number seven Howick St was lived in by several families (according to the census of that year) .People often lived one family to a room at this time and a total of nine people lived here then.

In 1875 two properties were up for sale, with sitting tenants Lot1 was probably what we now call no 7 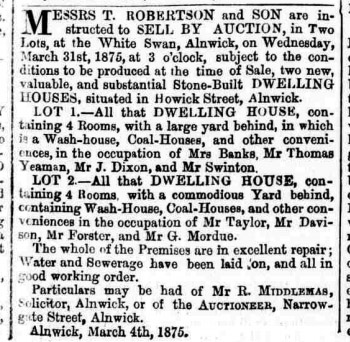 By the 1901 census we know not only the number of the property but also the number of rooms within that property. We know for sure that no7 had a mix of people sharing those rooms. There was:Thomas Thompson a cabinet maker, his wife and four children, in one room;Thomas  Yeamans a retired stonemason, his wife, his sister-in-law and brother-in-law and a boarder in two room; John Smith and wife and baby in one room; Thomas Kirk, a joiner, his wife and 5 children in 3 rooms; Thomas Adams a shepherd, his son and his family in 2 rooms; Anne Gilholme a laudress in one room; Ann Scott another laundress and her son in two rooms; and Margaret Telford in one room. This makes a grand total of 30 people in 13 rooms although some of these rooms may have been partitioned off .

The building was still as tenements in 1950, when it was put up for sale along with several other properties in Howick St.  At that time it was let to 7 tenants 9some of which were probably families) in 11 rooms. 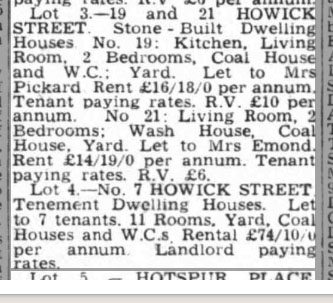 By 2014 there was only one resident when the house was sold.