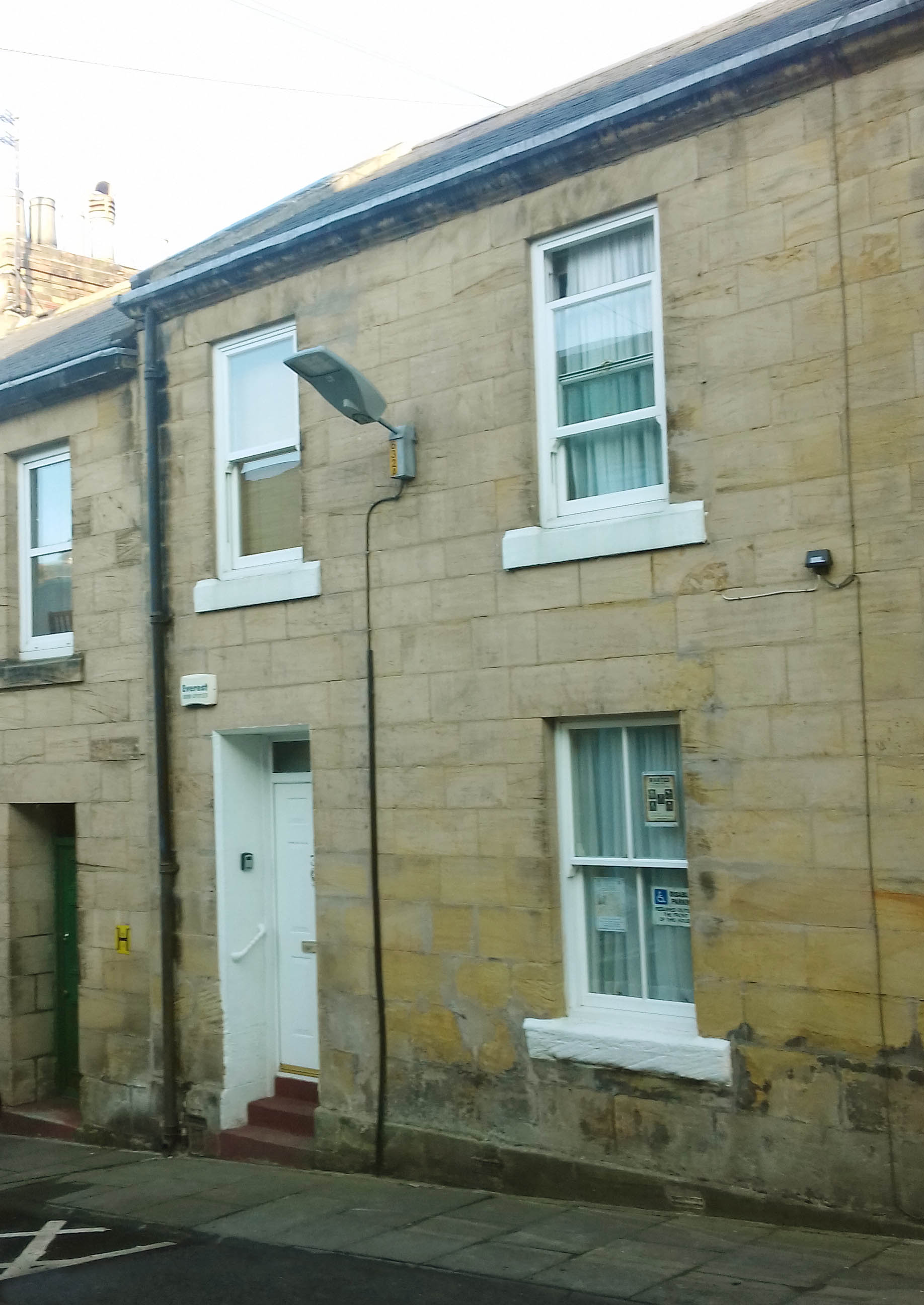 John Short had numbers 35 and 37 Upper Howick St built. John was born in Lesbury in 1802. By 1851 John was a widower living with his son, also John aged 13 and a house keeper, Margaret Scott in Roxburgh Place, Alnwick. 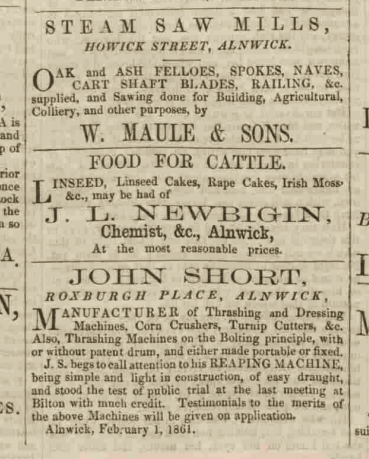 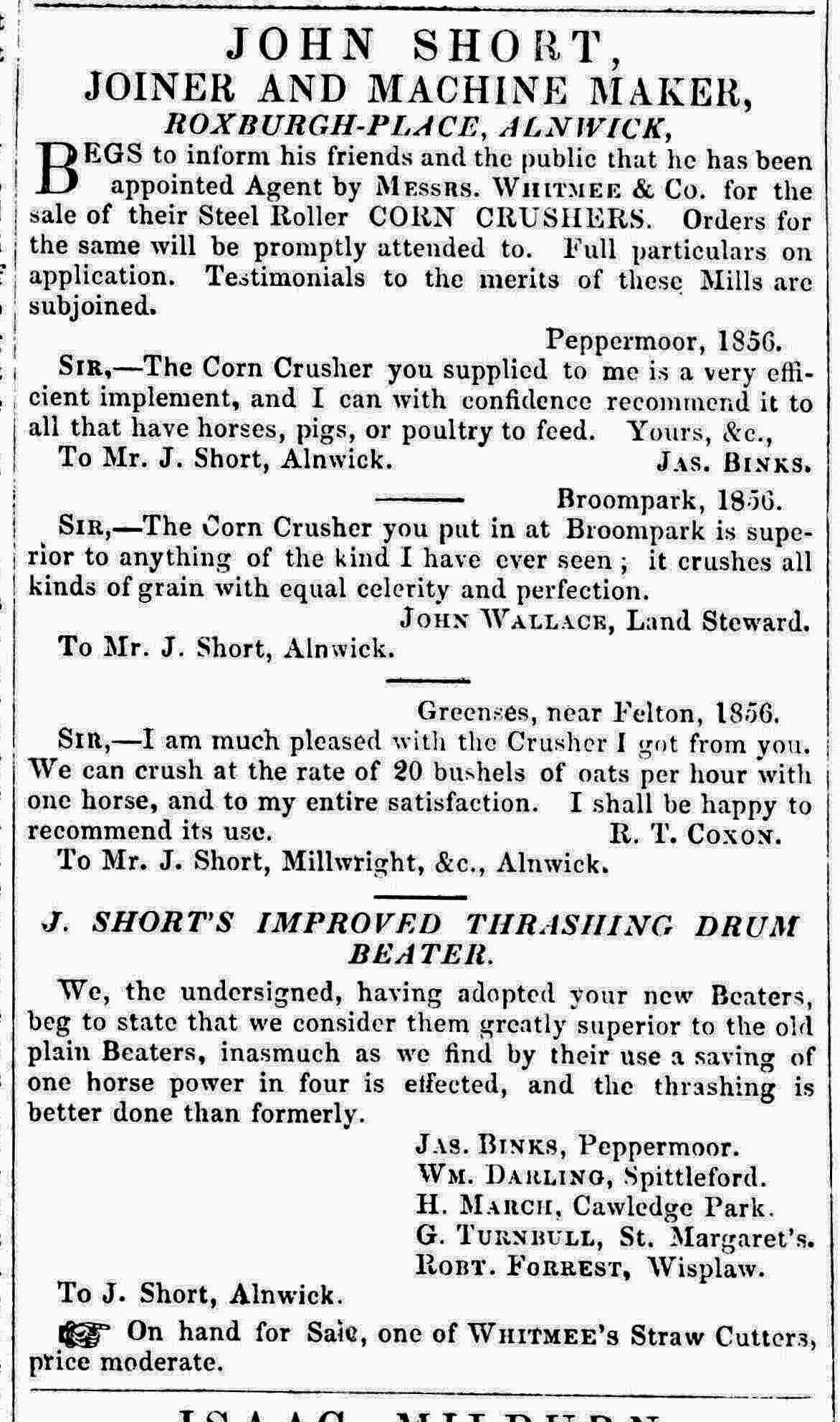 By the 1861 census John Snr. was still living with his son, now also a joiner, as partners in the business, with three employees and two apprentices. When the land which now is occupied by Howick St. was parcelled up and sold off by Mr Lambert, the developer in 1869, two plots were sold to Mr. John Short, “builder”, for the sum of £48. Q Did he build his own house ? at the age of 67??  Maybe his son helped?

This area was originally called Green Batt Close, but by 1869 it was called Howick St. Building had begun in the 1830’s and by 1869  houses, shops and workshops were nearing the top of the hill.

Mr Short’s land measured 43ft by 50ft. It was “bounded by the said street to the west, by a house belonging to Mr WH Robinson to the north (ie down hill) by a lane 10ft wide running between Lisburn St and Argyle Terrace to the east, and by a plot of land belonging to Mr.George. Armstrong to the south”.This plot was sold to Armstrong by G G Mounsey the landowner.

On 24th May 1870 a proportion of Mr Short’s property was conveyed to Mr. Joseph Appleby (skinner).This land was 125 sq yards with a dwelling house and party wall.

So on 1871 census there were 2 empty plots at the top of the road, next to Mr Joseph Appleby (fellmonger) and his wife Elizabeth. They lived next to John Short 69, joiner and machine maker, employing 2 men and 5 lads.

On 20th March 1882, John Short wrote his will devising that his son (John Short) and George Brown Collins should own the house but allow Margaret Scott to occupy the same during her lifetime, at an annual rent of £10 unless she failed to pay the rent or taxes and keep up the property. John died on 18/11/1883 leaving his personal estate worth £53. The house was valued at £250 with a rental value of £14 from the date of probate (March 17th 1884).

After John Short’s death, in 1884, his “housekeeper “ Margaret Scott, continued to live, upstairs in the house , letting the downstairs to Martha Ternent.

In 1887, Margaret became “strange in her manner”, saying that she had disgraced herself and could not look anybody in the face. It is wondered whether Margaret had been more than a housekeeper to Mr Short, all those years!

On 7th November 1887, Margaret could stand the disgrace no more, and committed suicide with a razor, over a bucket. An inquest was held in the John Bull Inn on Tuesday afternoon, the same day that she had been found by the coroner, Mr Watson, who also lived on Howick street. The jury returned a verdict “that the deceased had committed suicide , being at the time insane”.

John Short junior then sold the property to Margaret Alder. At the time of the 1891 census Margaret Alder was 65 and a spinster “living on her own means”. She had been born in Whittingham in 1826, the daughter of Thomas Alder, a farm Steward. Her mother had died before the first census in 1841 as she was living with her Aunt and brother Matthew, in Doxford. Ten years later she and her father were living in Bailiffgate where her father was a farm bailiff, and her brother Henry Alder was a solicitor’s clerk.In 1871 they were living in Narrowgate next to the Castle Inn, at that time run by Alice Percy ( see Clifton Terrace). Her father was 79 years old and a retired farm steward.

On the 1901 census this house was unoccupied. It was owned by B(arbara) Drysdale, so perhaps she was away for the census day. It is thought that she let out the property, however, and perhaps it was between tenants. I found that she was staying in Duke St, Alnwick, visiting two brothers at the time of the census.

In 1911, however 35 Howick St was occupied by Thomas Brown, born 1879 in Alnwick and his wife Janet Reay Brown.They had been married for five years but had no children. His mother in law, Jane Drysdale lived with them. She was the sister in law of the owner, Barbara Drysdale and was a 58 year old widow born in Ponteland. Her husband had been a carriage painter, brother of Joseph Drysdale coach builder.( b 1843) On the 1901 census they were all, the whole family, except Barbara, living in the coach works in Clayport St.

Barbara Drysdale owned number 35 until her death in 1921, in Stott Street, and it was sold by her executors to Mr Ralph Straughan. See the next page , a dynasty, for further details. 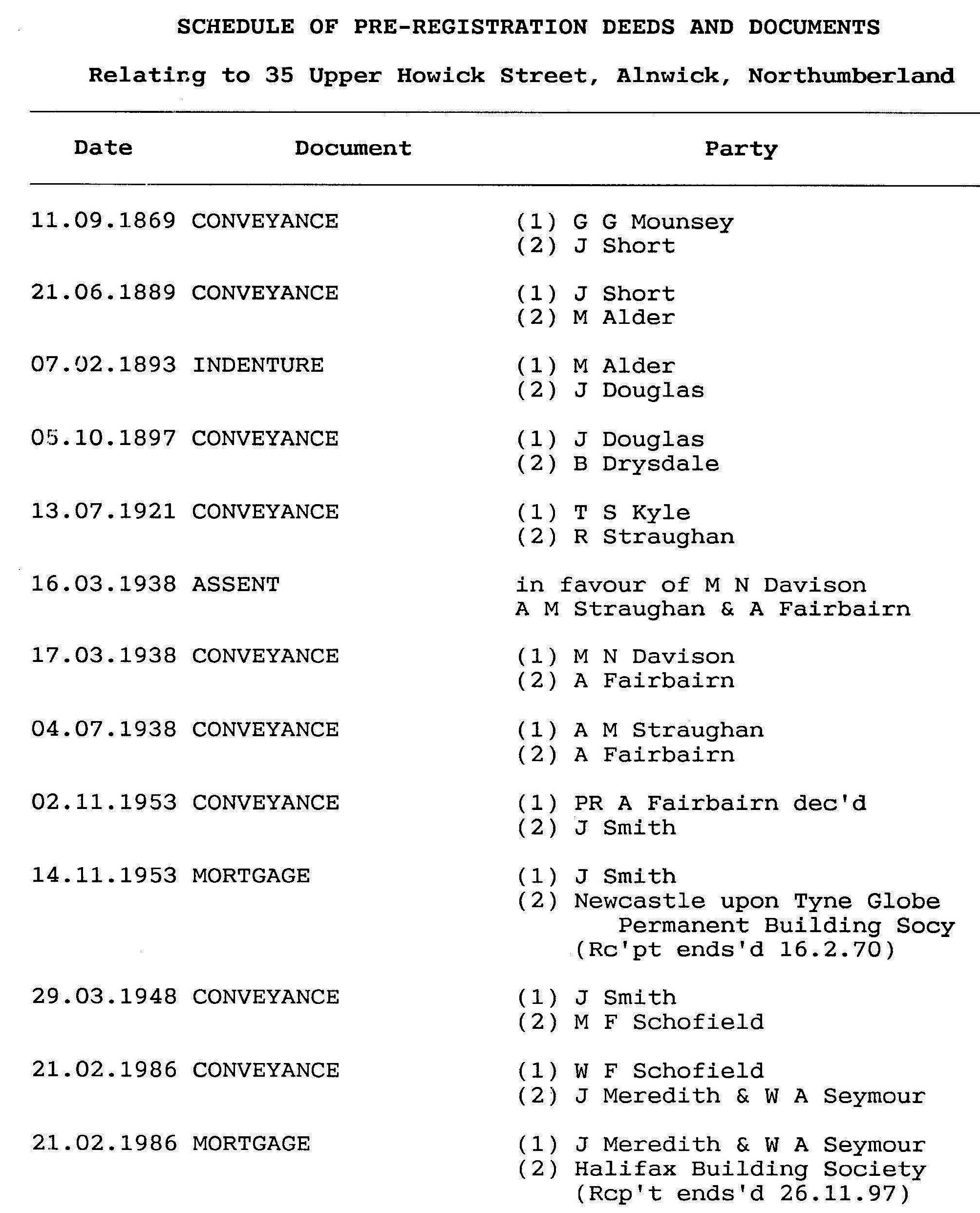