On the 1871 census William Carss, a 51 year old saddler was Iiving with his wife, Hannah, at number 32. William was born in London about 1820, but by 1851 he was already in Alnwick, lodging in Clayport Street and working as a master saddler. Ten years later he was married to Hannah and living in Croft Place. He had his own saddler business by then and was employing 1 man and 1 boy. After living in Howick Street they moved on to Bishopswearmouth, where William was a Clerk in a foundry. The Carss family sold up in April 1878 at an auction run by Mr Geggie. 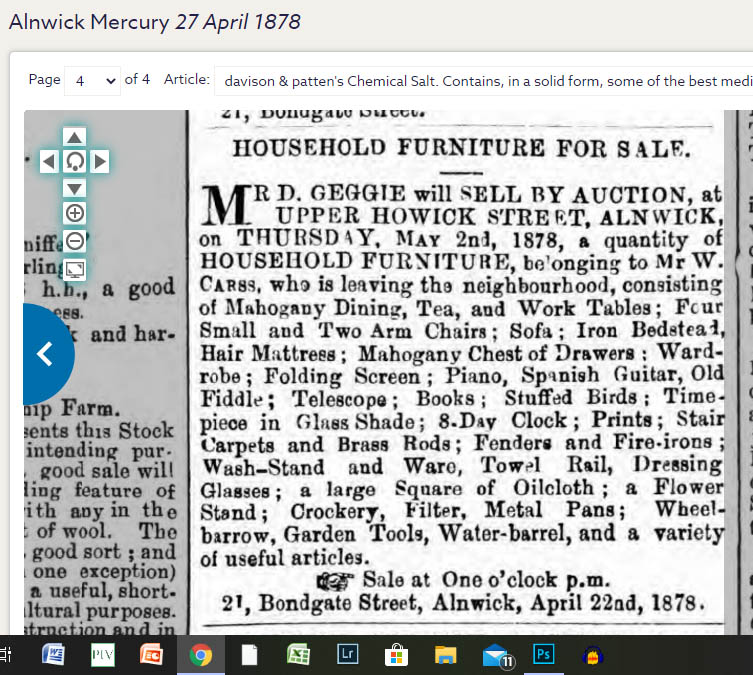 We were unable to trace the next residents in number 32 as the 1881 census wasn’t clear. By the 1891 census, Thomas Bagburn, a 31 year old butcher and his family were living in number 32. Thomas was born in early 1860, in Alnwick, and was brought up by his widowed mother, who ran a butcher’s shop in the Shambles but lived at 13,Bondgate Street. She had three other children but Thomas was her youngest. They also had two servants “living in”. It was quite a big business which he eventually joined, at 21. He wasn’t in Howick Street for long as he died 11th April 1895, age only 34 .

On the 1901 census for number 32, a widow called Mary Claxton was “living on her own means”. Mary was 59 and her daughter, Mary Eleanor, was 20 and living with her mother. They both came from Amble. Daughter Mary was the youngest child of the family. She had an older sister Eleanor who died young, and five older brothers who had all left home . The father of all these children was William Robert Claxton, a Master Mariner, from Clay in Norfolk. 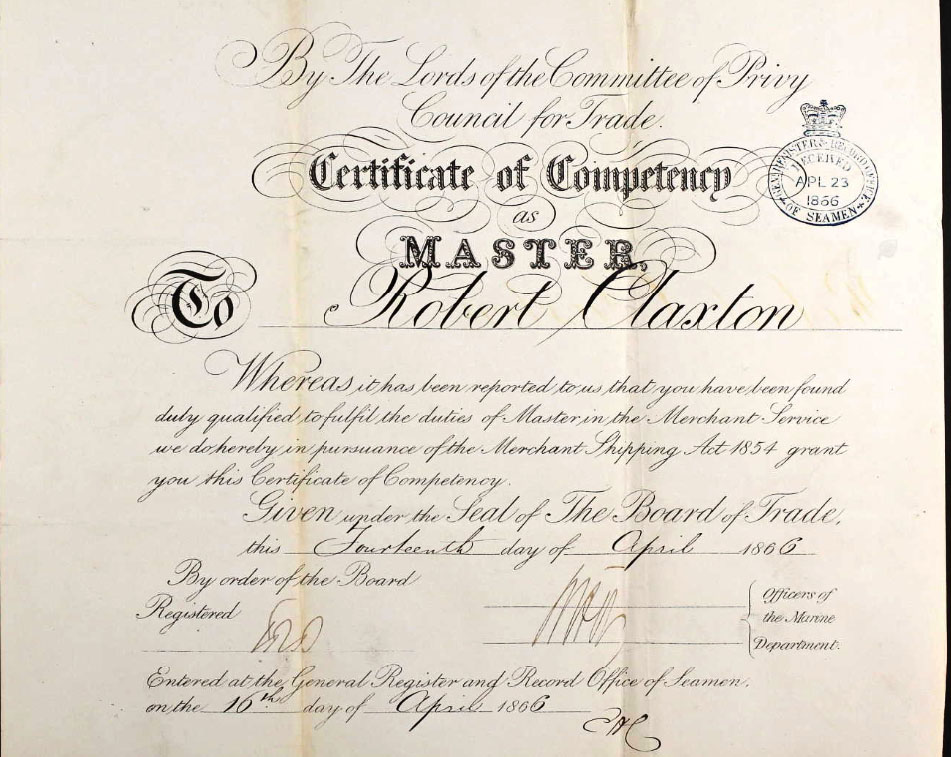 The only census he appeared on was in 1871, when he was living in Newburgh Terrace, Amble, with other mariners for neighbours. He might have been delivering coal, by boat, as Amble was a thriving port, in those days. He died at Amble age 45 on 19th May 1887 and was buried in Amble cemetery. 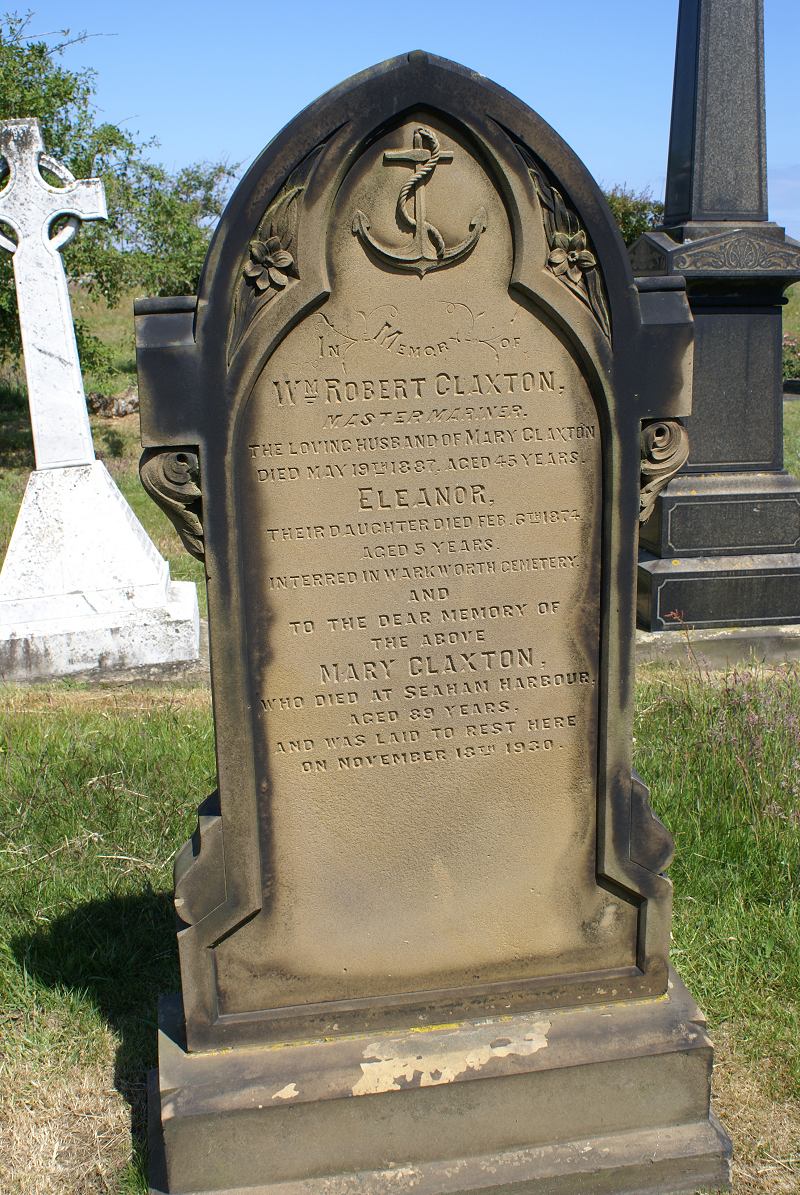 Mary was added to the headstone when she died in Seaham, County Durham, in 1930. She left her money to her daughter Mary then the wife of Robert Kay Wade, and her son, James Whiteford Claxton an architect and surveyor. James became a councillor in Seaham, from 1911 and worked as an architect for the Londonderry Estates. 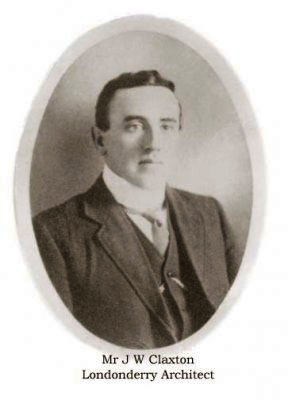 On the 1911 census for 32 Upper Howick Street, a single woman was also “ living on her own means”. Her name was Jane Hall and she was 66years old (b 1845) from Whalton. Jane had been baptised on 27/10/1844 to Alexander and Elizabeth Hall, who were farmers. In 1881 her father, who was a widower, her sister Dorothy and two of her nieces Lizzie Jane Hall, 13, and Annie Hall 11, were all living in Pit Cottages, Fenwick.

By 1891 she and her sister Dorothy were living together in a different cottage in Fenwick, but what made her move north all the way to Alnwick, we don’t know.Jane had a nephew living with her in a biggish house of five rooms then, in 1911. Her nephew was probably a son of one of her sisters as he was not a Hall, his name was John Alexander Fail, a 32 year old greengrocer’s assistant. He later married but stayed in Alnwick and in 1939 he and his wife Gladys and two children were living at 5, Dispensary Street.On the 1939 census for Howick Street, number 32 was lived in by Jane Grant, Mary Reid and Annie Smith and her redacted child. Jane ran a hairdressing business from the house. She was born in 1897 in Winalton, Durham. She and her older sister Ethel were born to, James Henderson Grant, a colliery blacksmith and his wife also called Jane Ann. The hairdressing business continued into the 1950s and in 1950 she advertised that she was going on holiday! It was told to me that the Duchess used to go to that establishment, by chauffeur driven limousine, which was parked outside when the Duchess was inside. The car was almost the same width as the street. There were very few other private cars around at that time, unlike nowadays, so parking was not an issue. Perhaps this photo shows a hair style by Jane. 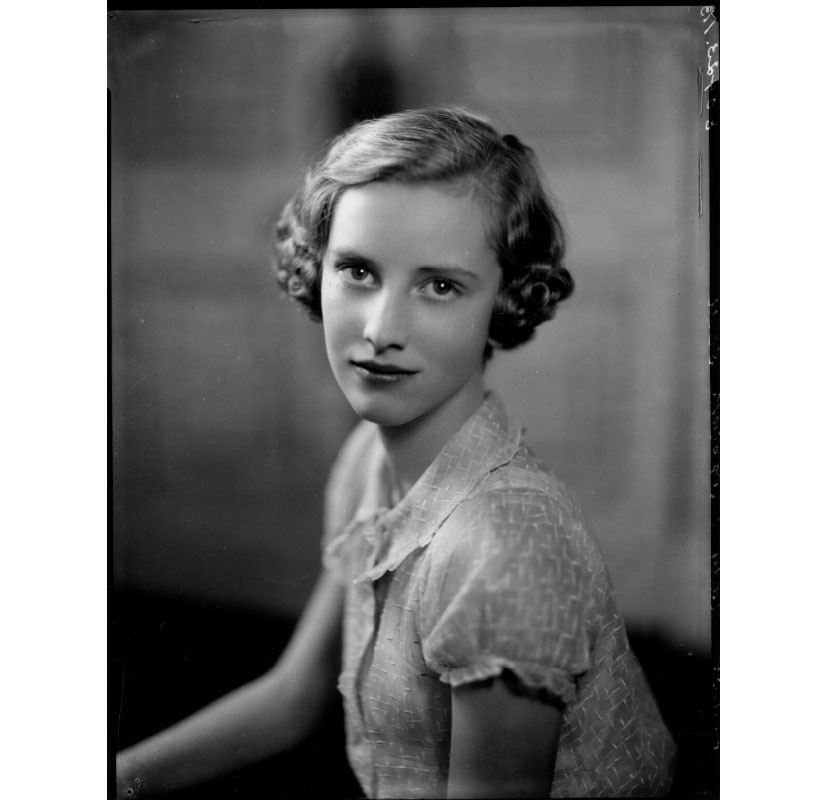