The house now standing near the top of Howick Street on the east side was yet to be built in 1871 census. All the remaining ground, divided into building plots, was owned by George Armstrong who intended to develop the land gradually going uphill. He was living in Argyle Place when he died and in a public auction of his properties, on 9th May 1878, Lot 6, was a part built property “adjoining Lot 5, on the north, designed to contain 4 rooms, a yard and offices having a frontage of 23ft 6 inches and a depth of 35 ft”. This building site was bought by Mr. T. Pickard for £90.

By 1881, a Mr Leopold Robison was living at number 39, a 31 year old bookkeeper for an ironmonger. He was born in Liverpool in 1850. His wife, Catherine M was a year younger, born in Rothbury and they had a servant, Margaret Halliday, an 18 year old, from Wooler. And that’s all we know about Leopold and Catherine.

They were gone before the next census, in 1891, replaced by Ann Hall a 63 year old widow living on her own means. She was also on the following two censuses, in the same house. Ann was widowed at 27 but did not remarry. She had one daughter. She was 87 by the 1911 census so she must have been happy there, living alone. Ann Arabella Hall died on 17th August 1914, having been widowed 60 years earlier.

The next person found to be living in number 39 was David Hornsby. In 1939 on the pre war register taken on 29/9/1939 David was a 67 year old locomotive crane driver. David was born in Ellingham, in 1872, and had always worked driving some sort of engine. On the 1901 census he and his wife Catherine were living in Beadnell, where he was driving his own traction engine. He was fined 2s 6d for standing his engine on Ord Bridge to take on water. ( Berwickshire News 7/5/1901). In 1904 his engine was producing so much smoke that he made the local papers! 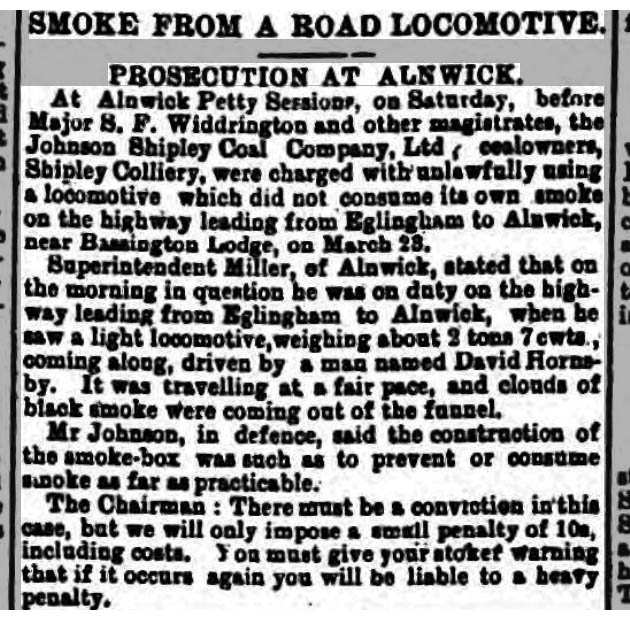 By 1911 they were living in Denwick with 5 children. He was then working as a crane engine driver in a quarry. They had four sons and a daughter in ten years.

Catherine died at the beginning on 1939, when they were living in Bow Alley, leaving two of their sons,

James was also a locomotive crane driver, and Norman a road stone quarrier living with their father and a paid housekeeper, on the 1939 records for Howick Street. David died in 1949 leaving his estate of £355 to his youngest son, Norman, who was still living at 39, Howick Street.