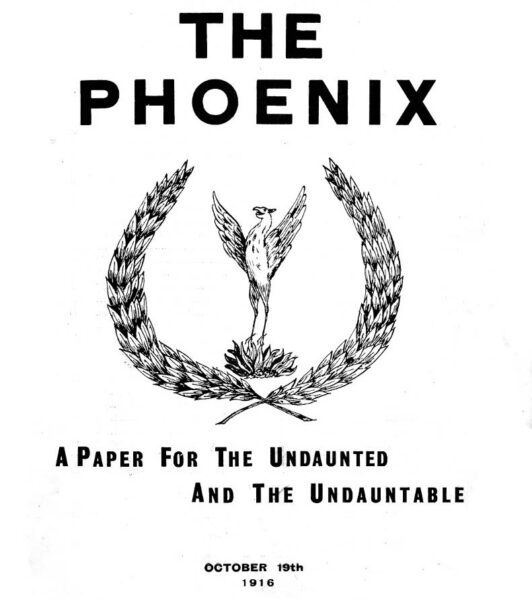 Shortly after the outbreak of war in 1914 it was decided to build a military camp in the pastures below Alnwick Castle. By early 1915 there were four sets of huts (imaginatively named A,B,C,D), each of which housed a battalion of 1000 men from the Northumberland Fusiliers who were doing their initial training. By the summer of 1915 these battalions had moved to other camps and a decision was taken in the autumn to convert most of Alnwick Camp to a convalescent hospital, while still retaining some functions as a major Depot for Northern Command.

The first convalescent soldiers arrived in January 1916. As part of the convalescent process it was decided that a camp magazine should be set up to report on events happening at the camp and to provide opportunities for convalescents to put any artistic or literary talents to use as part of their recuperation. To this end soldiers were invited to submit entries to the magazine, and prizes were awarded for the most deserving work.

The magazine was aptly titled THE PHOENIX and subtitled   A PAPER FOR THE UNDAUNTED AND THE UNDAUNTABLE.

We are fortunate at Bailiffgate to have two copies of the magazine from 1916 in our collection. They were given to us by a man from Sheffield who found them in his great grandfather’s effects. The magazines give us an insight into what was happening in the Camp at the time and the activities that the convalescing soldiers were involved in.

The October issue contains a look back at the history of the camp and how it was transformed from a training establishment to a recuperative one by laying out gardens, converting huts to recreational purposes, organising sports, and providing regular variety entertainment shows. 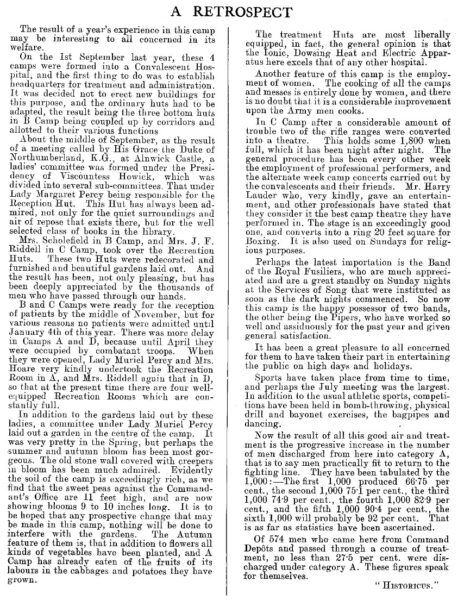 Interestingly at the end of this retrospect is an analysis of the growing effectiveness of the treatment in returning the wounded to active service. However, it is possible to speculate that this may have been more due to the growing shortages of front-line troops leading to a lowering of fitness criteria, rather than improvements in the treatment regime.

More testimony to the beneficial effects of gardens and gardening can be seen here: 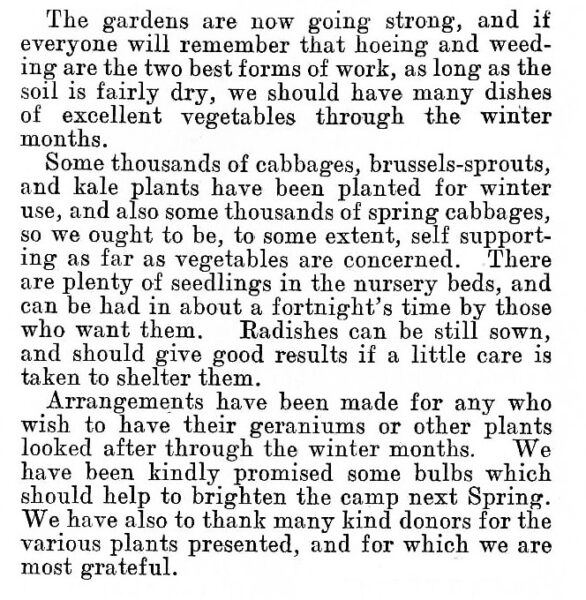 The value of convalescents getting involved in handicrafts was also recognised in this contribution from Muriel Percy, a daughter of the Duke of Northumberland. She was very active in supporting the work of the camp

Goods made by the convalescents were sold and presumably raised funds for activities at the camp. Interestingly, the activities involving sewing seem to have been particularly popular. This can be seen in an artistic contribution to the magazine from Corporal F. Heaton of the King’s Shropshire Light Infantry: 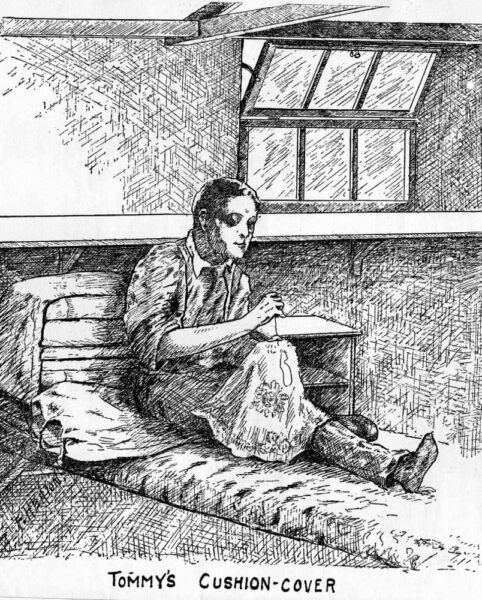 The magazine gives lots of evidence of the importance of providing entertainment for the convalescing troops in order to raise their spirits and stave off boredom. The extract below comments on this and also refers to the problems of finding entertainers, many of whom were being conscripted at the time. 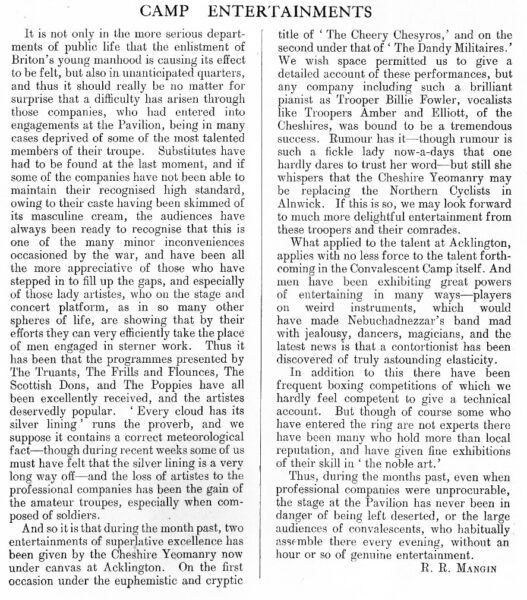 As is reported in the above extract, Boxing tournaments were a popular form of entertainment and here is a report of one such event: 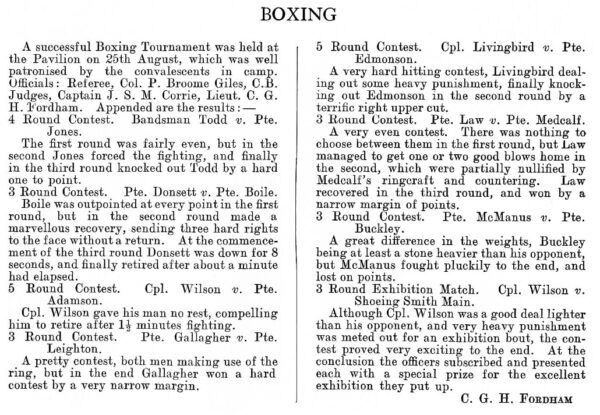 Some of the most interesting pages give a day by day account of the variety of events in the camp. Below we can see sports events, concerts, visits to events outside the camp and convalescents going out of camp on working parties. The first major Sports day was very successful and attracted several hundred local civilians as spectators. There is even reference to one of the staff of masseuses going missing and search parties being organised. Thankfully she turned up safely. 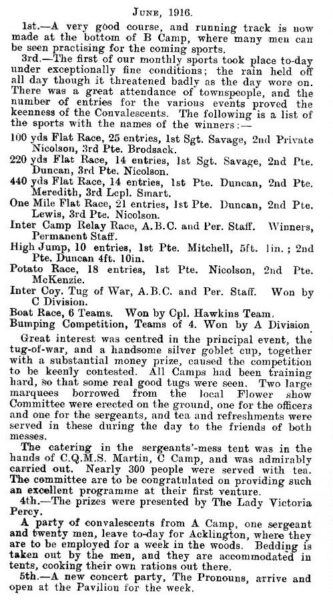 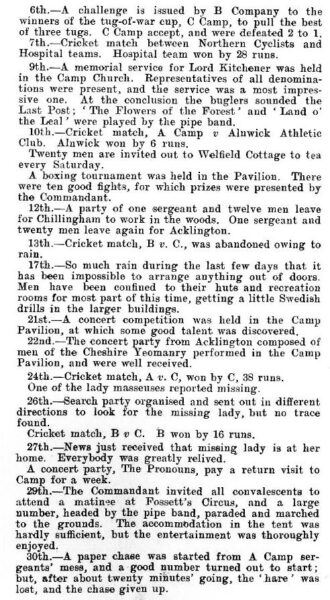 With hindsight the entry for July 1st is rather poignant. As the convalescents played cricket, across the Channel several hundred of the men who had trained at the camp a year earlier were being killed on the first day of the Battle of the Somme.

In August there was more cricket, boxing, concerts and even a visit to the Camp by one of the most popular entertainers in Britain – Harry Lauder – whose son had been killed a few weeks earlier on the Somme. 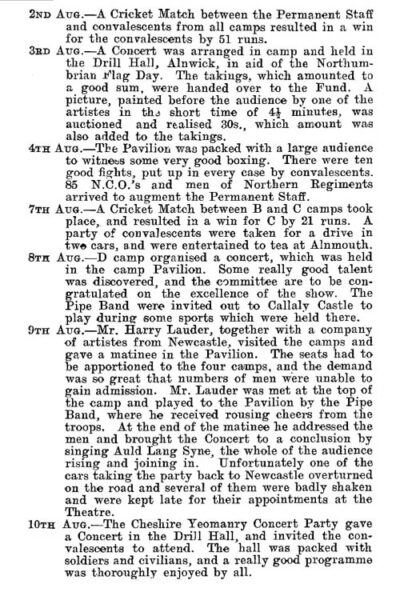 Local people were keen to welcome the convalescents and take them on visits: 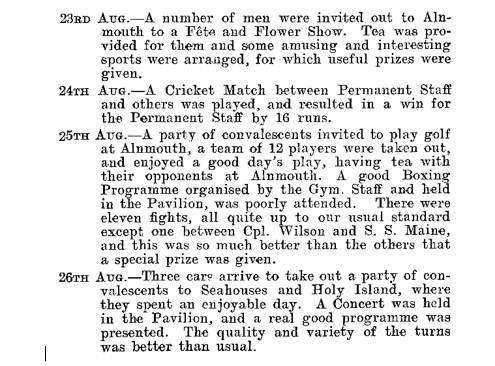 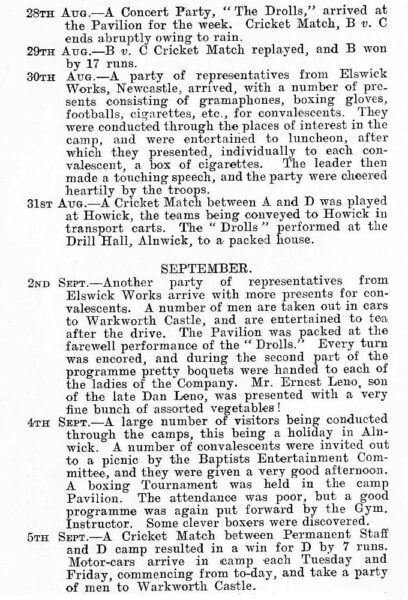 Convalescents were encouraged to submit written pieces for inclusion in the magazine and there are prose accounts of experiences at the front as well as poetic reflections on the war. Lance Corporal J. Hobson of the Duke of Wellington’s Regiment contributed this: 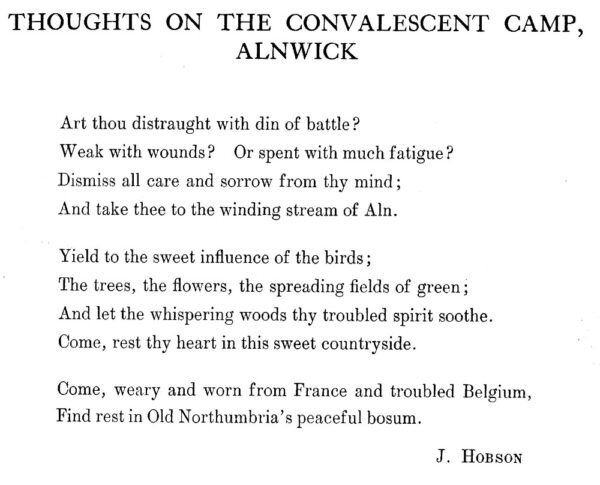 And from Corporal Maurice Fox of the Royal West Kents:

As well as encouraging literary endeavours The Phoenix provided an outlet for artistic talents too. There are humorous observations of camp life such as these two cartoons by W. Drew: 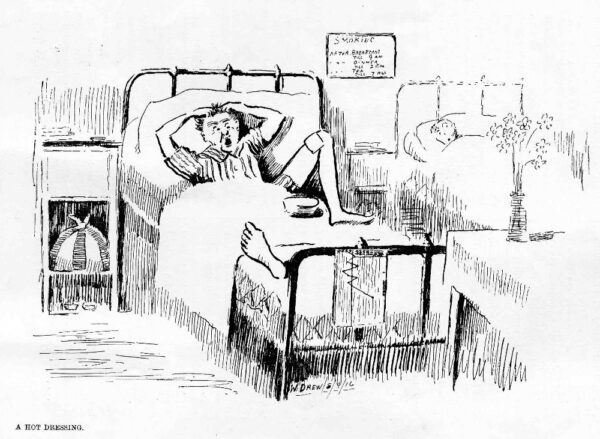 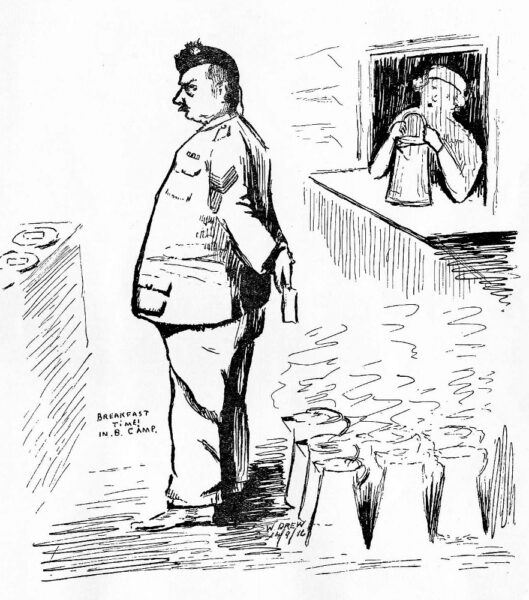 Or this sketch by W.H. Dunn of the Royal East Surreys of soldiers reading The Phoenix: 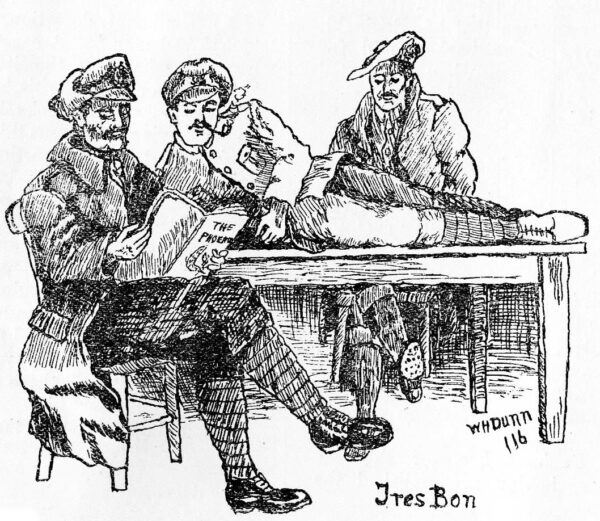 And here a reflective look at camp life: 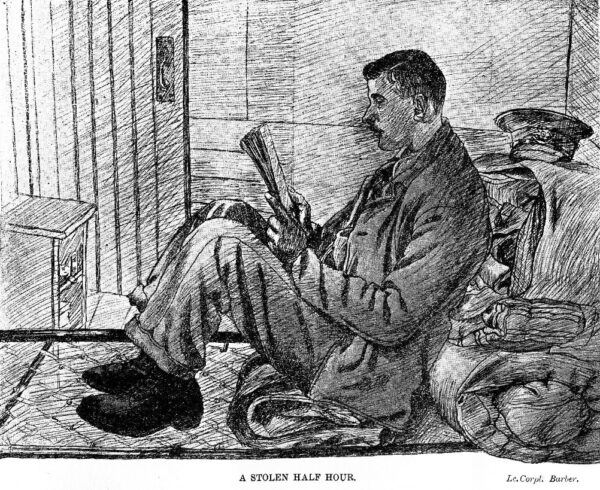 However, perhaps the most impressive artistic contributions are those of Sergeant Arthur Hogg of The Middlesex Regiment. Arthur Hogg (1872-1949) was an artist, etcher and engraver who had trained at the Royal College of Art and in Paris. His drawings of scenes from the Western Front are powerful images: 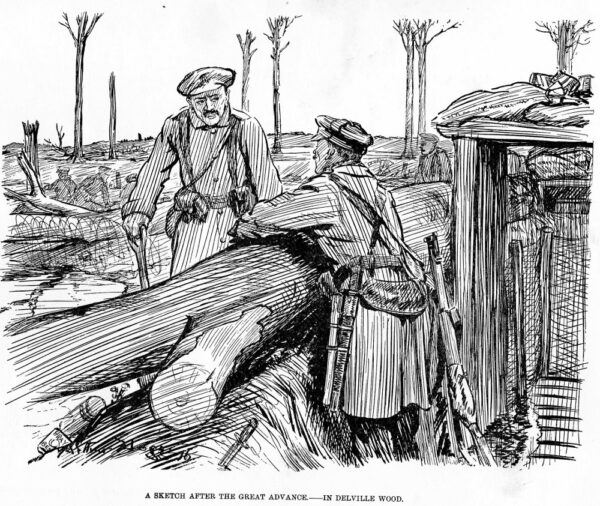 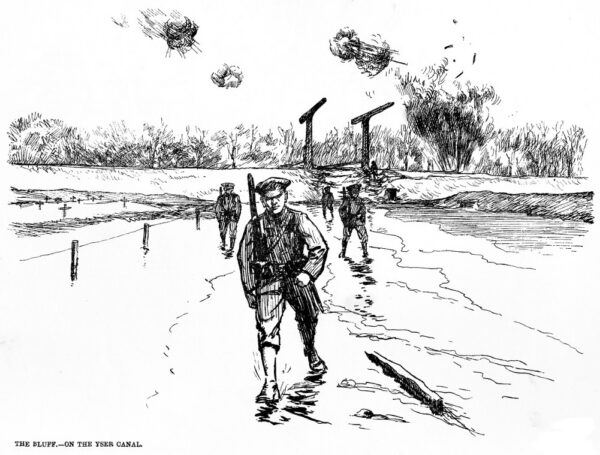 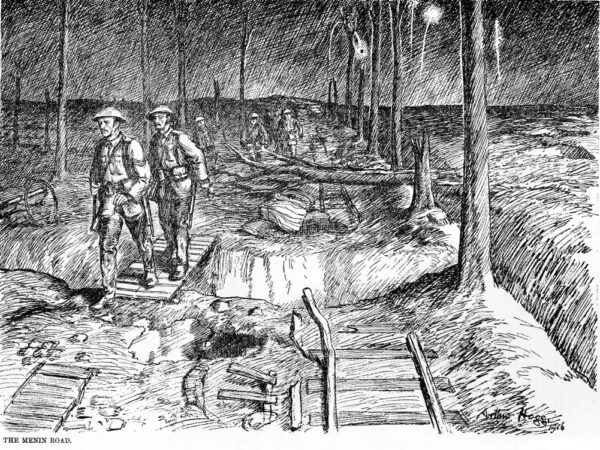 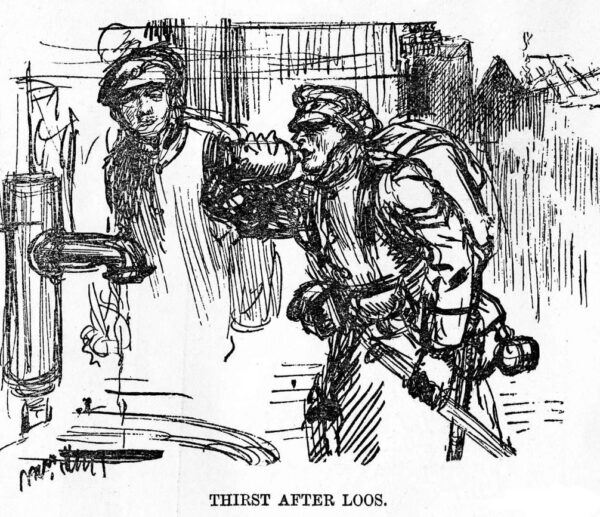 Unfortunately we only have copies from 1916 and none from 1917 when one of the contributors was a young Yorkshireman, a Lance Corporal in the Duke of Wellington’s Regiment, who in later years became a highly successful writer and broadcaster. His name was J.B Priestley.