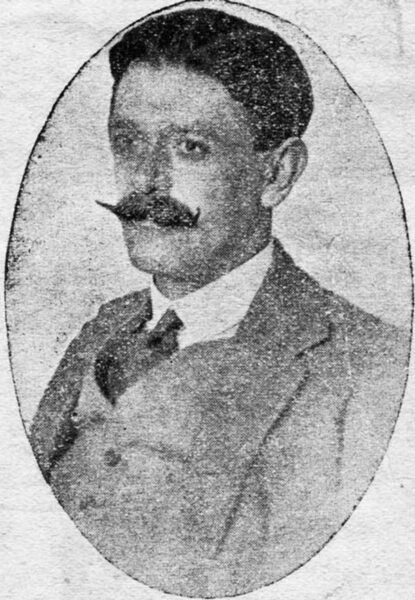 Today we live in a world where almost everyone is a photographer. Mobile phones, tablets and digital cameras provide the means to take photographs anywhere and at any time. An estimated two BILLION photographs are uploaded and shared to social media sites every single day!

Turn back the clock 100 years or so, and the situation was very different. In the period before the First World War most photographs were taken by professional photographers, and amateur photographers were much less common. The cost of cameras, film and processing put photography beyond the pockets of most of the population. While it is true that the advent of the cheap Kodak Box Brownie in 1900 did make taking “snaps” more accessible, the quality of images was not high and good quality cameras and lenses were still expensive.

One Alnwick man who could afford good quality equipment was John Hall Sanderson. Born in Alnwick in 1886, he was the son of Joseph Sanderson who, with his brother Henry, owned the Alnwick and County Stores on Bondgate Within. This was a grocery, wines and spirits business founded in the mid-19th century by Henry Sanderson senior, and originally located in Narrowgate. 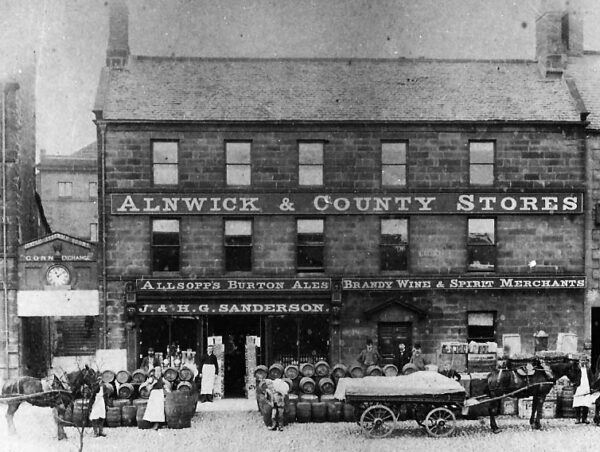 At some point the family bought the Corn Exchange building and by the end of the Edwardian era it was operating as a cinema and music-hall.

J H Sanderson attended the Duke’s School from 1896 to 1900 and, according to their records, he then left to attend Dulwich College, a private school in London. On his return to Alnwick he worked in the family business, and on the retirement of his father Joseph, he became a partner in the business and took on the management of the Corn Exchange Cinema.

At the Bailiffgate Museum we have in our Collection several dozen wonderful photographic glass slides which were projected during the intervals between films. These were recovered from the Corn Exchange when it closed in 1994, and later purchased at auction in 2008 for £270 on behalf of the Alnwick Lions Club, who then donated them to the museum. Along with the photographic images are a number of slides which have been painted black, and then text describing the image has been scratched into the paint. It is these latter slides that indicate that the photographs were projected onto the cinema screen. The slides are 2¼” square positive images sandwiched between two thin glass plates and then taped together at the edges.

Not all the images can be precisely dated but, of those that can, the earliest is from February 1906 and the latest from September 1914. The latter are of nurses learning to care for casualties using the local Boy Scots as guinea pigs. The tragedy in this series of images is that no-one could have imagined in September 1914 how massive a task caring for casualties would soon become all over Great Britain. 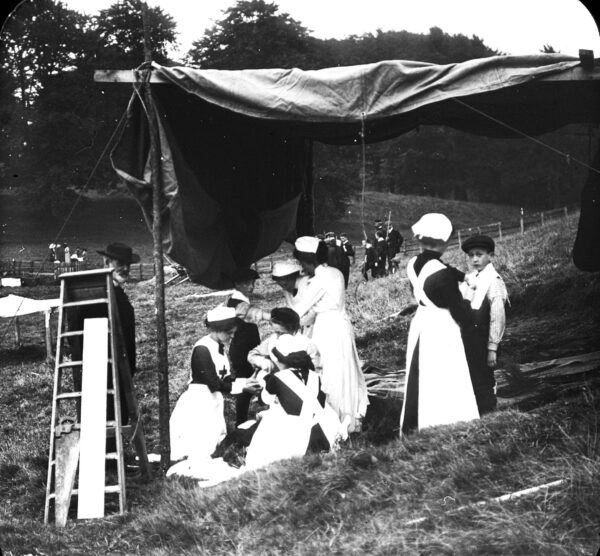 It is possible to regard the showing of the pictures to the captive cinema audience as self-indulgence on Sanderson’s part (“you must see my holiday photos”). Far more likely, he realised there was a genuine interest in seeing images of local events and places. There was, of course, no television, and newspapers carried far fewer photographs than is the case today. Perhaps he saw himself as a form of local news photographer. None of the slides date from after the Great War and this is probably because the cinema newsreels of Pathé News would have filled the intermissions so there was no longer a need for this kind of local news photography.

The earliest dateable image is this one of the Alnwick Shrovetide Football match in February 1906. 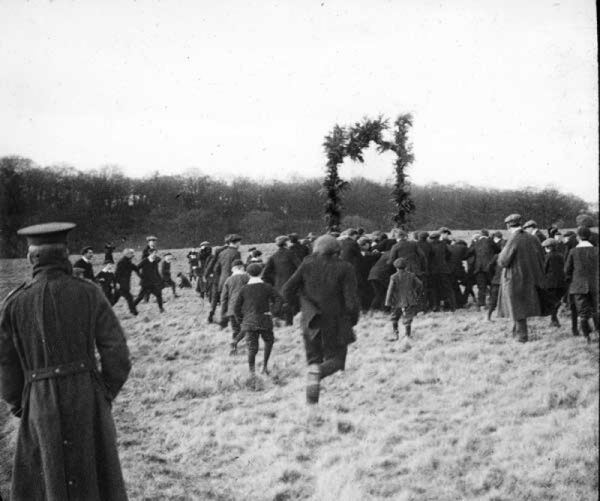 There are a number of other sporting photographs in the collection. These include  two photographs of the opening of the new golf course at Rothbury in 1908. From February 1914, is a photograph taken at the start of the Alndale Club Point to Point, from Hawkhill to Eglingham, accompanied by one of the text slides.

As an old boy of the Dukes school, John would have had a personal interest in the school’s centenary celebrations in 1911. Here we have a photograph of some of the old boys walking to the celebration. 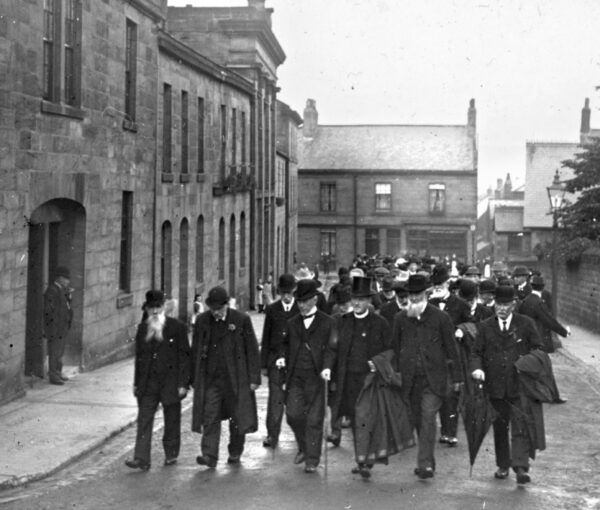 A significant number of local buildings feature in the photographs, including Bothal Castle, Brinkburn Hall and the Wesleyan Chapel in Morpeth.

The most powerful images are probably those taken at the funeral of the suffragette Emily Wilding Davison in Morpeth in 1913. Although she was born and bred in London, her father and mother were from Morpeth and Longhorsley respectively. After her death, following the incident at the 1913 Derby, she was laid to rest in Morpeth. 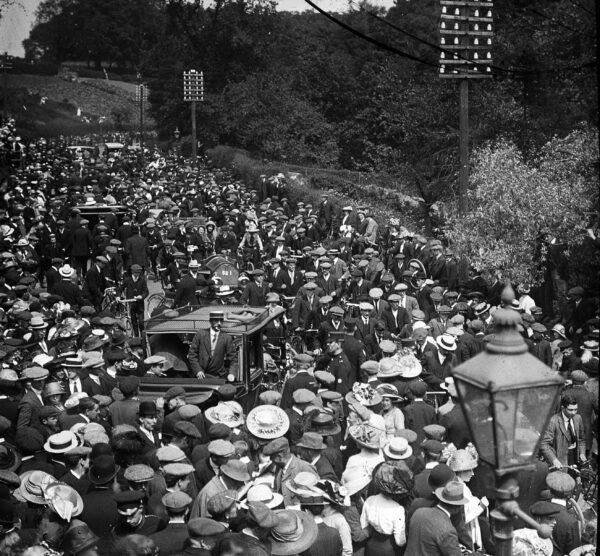 Apart from his interest in photography, John was also a keen motorcyclist, which we know from a report in the local paper that reported his involvement in an accident on Denwick Lane in May 1913. He felt that the crash was due to the poor street lighting and claimed £5 compensation from Alnwick Urban District Council. The Council, however, were not forthcoming.

In his personal life he married Laura Black, from Sunderland, at Newcastle Cathedral in the summer of 1914, and they had three children: Dorothy, William and Muriel. Towards the latter part of the Great War he served as a sub-lieutenant in the Navy. After the war he spent the rest of his life in Alnwick running the family business and died in 1971, aged 84.

After their wedding he took Laura on honeymoon to the Shetland Islands and, while there, he took photos of the Norwegian Whaling Station at Ronas Voe. Not perhaps the most romantic of places to visit on honeymoon, but I’m sure they had a whale of a time.. 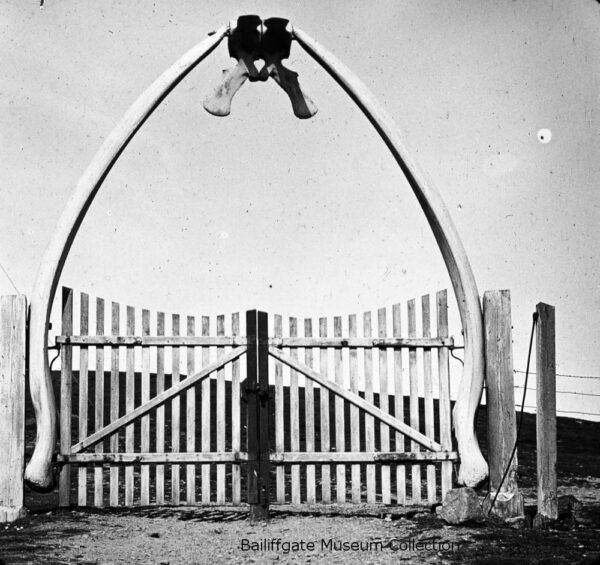 A rather odd souvenir photograph from JHSs honeymoon

For the fuller range of John Hall Sanderson images in our collection and many other wonderful images, just go here