A recent exhibition at  Bailiffgate Museum depicted  a ‘Hundred Years of Fashion’, with a display of gowns from world-famous designers. More than 100 years ago, before designers such as Lanvin, Chanel, Balenciaga and Gucci had opened their salons, however a local Modiste and Court Dressmaker travelled to London and Paris to bring French fashions back to Alnwick. He also made copies of French designs in his workrooms (perhaps those of Worth and Vuitton) and held Expositions of Fashions in designated Salons in his shop in Bondgate.

Born in 1849, William Percy was the third son of Hugh Percy, a clerk employed in the estate office at Alnwick Castle¹, and elder brother of Charles Percy who later became a solicitor in Alnwick. After William completed his education at the Duke’s School in 1862, he became an apprentice tailor with D.P. Bell, Drapers & Outfitters in Clayport Street. The Census return for 1871 shows William Percy then aged 22, as a Draper’s Journeyman, and an article in The Guardian newspaper reveals that William then went to London to work and gain experience in Marshall and Snelgrove’s store. He returned to Alnwick in 1873, and joined William Hindmarsh in his drapery business. On the death of the latter William became sole proprietor.

Bulmer’s 1887 Directory of Northumberland lists William Percy as a Linen and Woollen Draper at 46, Bondgate Within, and residing in Belvedere Terrace². Sixteen other Drapers & Outfitters and thirty Dressmakers were listed in the town at that time. Documents show that in the late 1880s, Alderman Adam Robertson who owned the Turk’s Head Hotel at 44, Bondgate Within had sold part of the hotel yard to William Percy, and leased him No. 46, the projecting eastern wing of the building, distinguished by its rounded corner . Nos. 47 & 48 were occupied by T. Dixon & Sons, Bakers and Confectioners. The large image shows part of the Percy establishment on the left, and the baker’s shop prior to later alteration to the frontage. 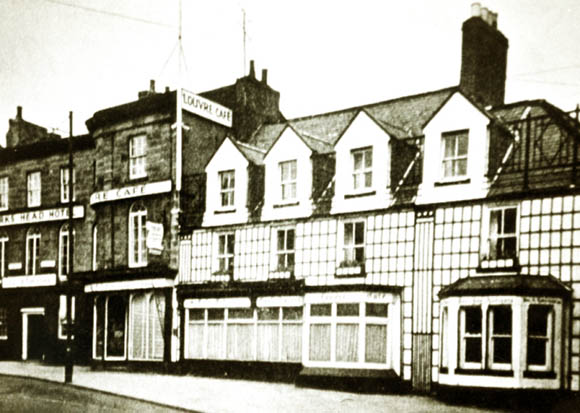 An 1889 printed billhead describes William Percy as ‘Silk Mercer, General Draper & Clothier, Dressmaking and Millinery, Mantles, Fancy Goods, Baby Linen’. By 1895, new stationery with a more decorative letterhead included the term ‘Modiste’ (a maker of fashionable clothing and accessories) and the name ‘The Louvre’. This was at a time when paper patterns for dressmaking were appearing in shops, French fashion designs were being copied, and branches of French salons had opened in London. The new letterhead showed how his business had expanded to include services as a ‘Ladies Tailor, Military & Civil Tailor, Court Dressmaker, Milliner, Manufacturing Furrier, maker of Riding Habits and Liveries, Marriage Trousseaux and Family Mournings’. The latter referred to the custom of wearing black clothing for a period of time after a family death.

Mr Percy also stated that ‘after years of careful study and observation of the best French and English dress fashions he was the Inventor of the Louvre Scientific Dressmaking System’ an original and artistic system for dress cutting which was far ahead of all others. His patrons could, if desired, have gowns and mantles cut by this system. As a ‘mercer’, he would work with silk and other costly fabrics.

¹ There is no connection between the two Percy Families. 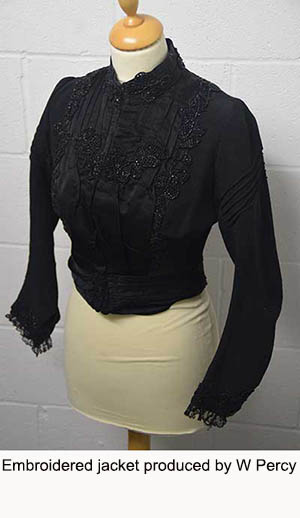 As a ‘court dressmaker’ he could make garments for those of the nobility and gentry who attended functions at court, or balls held in Alnwick Castle and other local residences. He also worked with fur, leather and sealskin, and the heavy cloth used for soldiers’ uniforms. An illustrated advert stated that he was ‘by appointment Master Tailor 1st VBNF’, the Volunteer Battalion Northumberland Fusiliers.

Such a business would have required an army of assistants. He is described in his obituary as ‘one of the Merchant Princes of Alnwick’ who had employed a large number of hands in all departments and was the patentee of several useful inventions. An advert in The Alnwick Mercury in 1889 stated that ‘fifty Designers, Milliners, Dressmakers and Tailors are daily engaged at the Louvre producing effective and special novelties’ (new fashions). In another advert it is written that ‘Mr Percy has just returned from the Markets. His head dressmaker and head milliner have also completed their visits to the centres of fashions and the smart up-to-date goods which have been culled from the productions of Paris and London creation are now being exhibited. Inspection of the novelties is required’. Further reference is made to ‘the latest Parisian embellishments imparted to give that finish which stamps the Louvre productions’. An establishment named ‘La Mode Fabergé’¹ wrote that ‘Mr Percy is an artist, and as an artist dares to create where others only strive to imitate’.

Ready-made items could be viewed at ‘Expositions’ held in ‘Spacious Dress, Mantle and Millinery Saloons’ where there was ‘never importuning to buy’. The Alnwick and County Gazette recorded in 1915 that ‘no exhibition in the north could surpass that held at The Louvre’. Individual designs could be prepared for his clientele. Samples of designs and fabrics used were available post-free. Gowns, garments, costumes could be made for day and evening wear, balls, weddings, fancy dress, travelling, holidays, tennis, shooting and fishing. Matching millinery was available where appropriate. According to one advert, Percy gowns and tailor made outfits were sent to ‘the uttermost parts of the earth’. His statement was supported by extracts from letters of appreciation from clients in Chicago, South Africa, Calcutta, New Zealand and Archangel in Soviet Russia, just outside the Arctic Circle. A customer wrote from Schloss Stülpe (now a luxury castle hotel in Brandenburg, south of Berlin) to say that her dress ‘was not a bit crushed after a long journey. I am charmed with it. The dress is so stylish and fits perfectly. I cannot get anything so stylish or dainty in Germany. Good old England, to the front (sic) again’. 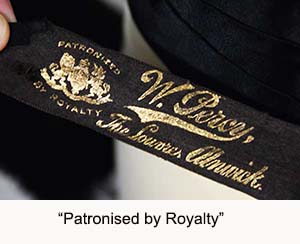 ‘H M Queen Victoria ordered Cheviotside Tweed for her own use’. HRH the Princess of Wales declared her ‘Cheviot Gown was charming and I was much pleased with it’. HM the Queen of Denmark was ‘very pleased with the tweeds for her trousseau, and they gave her the greatest satisfaction’. Letters from Royalty were displayed in the shop window.

A celebration dinner was held in the White Swan Hotel in 1913, to mark the 25th anniversary of the founding of the Gazette. In a speech to propose a ‘Toast to the Town and Trade of Alnwick’, it was said that the tradesmen had made the name of the town known world-wide. These included companies such as Hardy Bros and the Alnwick Foundry (which sent goods to Africa, South America and India) and individuals who had made their mark elsewhere.

In responding to the toast, William Percy added the names of Robertson’s Artistic Furniture and William Maule’s Carriage Manufactory which was the first business in Alnwick to be given Royal Patronage. He did not refer directly to the Louvre’s Royal Patronage, but declared he ‘would not be doing his duty if he did not mention that by little Coquetside were the mills of Northumberland that had produced garments of tweed with which the greatest Royalty in the land were clothed. A final plea was made that those present at the function would make a strenuous endeavour to lift the trade of the town and district to the pinnacle of excellence.

There is reference in adverts to the Louvre Fur Stores and to fur renovations carried out by experienced fur workers on the Louvre premises at wholesale prices. If desired, furs owned by Mr Percy’s clientele could be altered, cleaned, stored in summer, or even remodelled in London or Paris. When purchasing muffs, necklets, capes and coats customers were given information about the pelts and how to care for them. A request for ‘thousands of moleskins, preferably dried flat’ appeared in 1912 in the Alnwick Mercury newspaper. Following a request in the Alnwick & County Gazette in October 1914 for public donations of sheepskin coats for the Fighting Fifth on the Western Front, 300 were made by Mr Percy’s workers at The Louvre, and sent out in January 1915, together with 300 pairs of socks.

Gentlemen’s Artistic Tailoring was also advertised, explaining that ‘the difference between a West End Suit and one made at the Louvre, so far as cut, style and workmanship are concerned is Nil. But there is a great difference in the Price, and in placing orders for Suits, Overcoats, Breeches to be made at the Louvre, customers will find this Difference decidedly in their Favour. Tweeds – fashionable; style – correct; workmanship and finish – perfect; fit – guaranteed; price – tempting. Mr Percy gives personal attention to the fit off’.

An announcement was made on 18 May 1915 in the London Gazette that William Percy’s business had been ‘sold to Francis Wilson Fenwick and Catherine Redpath who will carry on the said business from 9th March 1915 under the style of “Percy & Co” dated 10 May 1915’. The solicitors used were Norton, Carter and Wade of Leeds. Mervyn Wade had married Lily, daughter of William and his wife Annie. Their other daughter Violet, married Edward Swinney of the Morpeth Engineering Company, and their descendants still live in the area. William’s great-granddaughter has kindly allowed the publication of photographs of a treasured Percy garment. 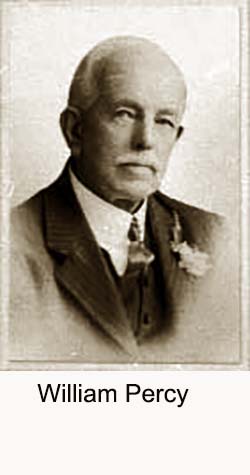 William Percy died in 1931 and was described in his obituary as ‘of High Christian ideals, one of the best read men and public speakers in the town’ and often in demand in connection with his Church and Duke’s School functions. In 1898 he had organised the celebrations for Mr Thomas Collinson his retirement after nearly fifty years as headmaster of the Duke’s School. One of his most cherished ideas was a laid-out public park with children’s playground. His other interests included involvement with the National Lifeboat Institution, and the Alnwick Young Men’s Mutual Association.

After his brother Charles suggested the printing of a weekly newspaper in the town and the publication of the first Alnwick and County Gazette in 1883, William became one of its first Directors. Originally in Bondgate Within, the office of Charles Percy, Solicitor, moved to the building now occupied by the present newspaper’s offices.