The Bailiffgate Museum’s two west windows depict two saints, Hilda and Thomas Percy. They were given to the then catholic church in November 1896 by seven descendents of St Thomas Percy who came, in early Norman times, from around Whitby. 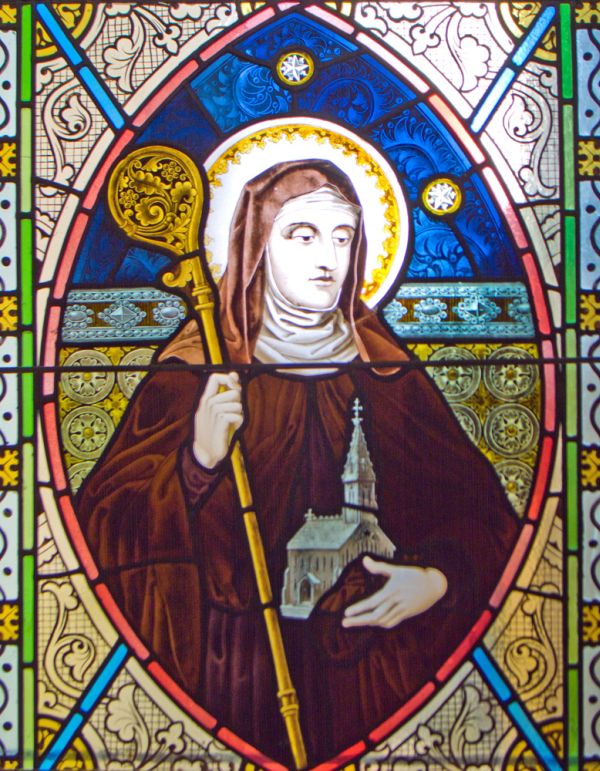 A princess of Diera (today’s Yorkshire), Hild, whose has been known as Hilda since medieval times, was born in about 614. She became a Christian when she was baptised by St Paulinus – at the same time as her relative the Northumbrian king Edwin in 627. At the age of 33, she was invited by St Aiden to establish a new religious community on the river Wear. A year later she moved, as Abbess, to the important double (that is one with both monks and nuns) monastery of Hartlepool.

Hilda is most famous for her next role as Abbess of another double house: Whitby. Many came to seek her advice, but it was the Synod held at Whitby in 664 that is her most important claim to fame. It was here that the English church decided that they would follow Rome rather than Celtic practices.

The connection between Whitby Abbey and Alnwick is that the Norman, William de Percy, owned lands in Yorkshire and was instrumental in refounding Whotby Abbey after the Conquest. The Percy family went on to hold the Earldom and Dukedom of Northumberland, and still live at Alnwick Castle.