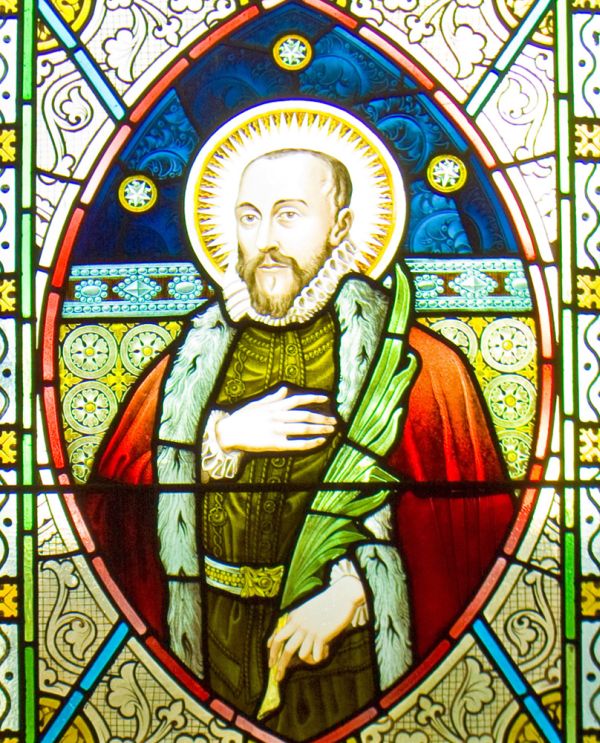 The Hilda and Thomas Windows

The Bailiffgate Museum’s two west windows depict two saints, Hilda and Thomas Percy. They were given to the then catholic church in November 1896 by seven descendents of St Thomas Percy who came, in early Norman times, from around Whitby.

Percy’s father, 6th Earl of Northumberland, was executed in 1537 for his part in the Pilgrimage of Grace, a rising against Henry VIII and his policy of dissolving the (Catholic) monasteries.

Thomas did not regain the title of Earl until 1557. The arrival of Mary Queen of Scots in England in after she was deposed in Scotland in 1567 led to the Rising of the Northern Earls. The aim of this movement was to depose (and kill) the Protestant Queen Elizabeth I and replace her with mary.  For Catholics like Percy Mary, as great granddaughter of Henry VII, had a more legitimate claim to the throne than Elizabeth. The rebels hoped to be supported by troops from France and Spain.The rising was not a success and after a defeat near Chester-le-Street, the leaders, Percy and the Earl of Westmoreland fled to Scotland.

Westmoreland escaped to the Netherlands, but Percy was sold to the Scottish government who held him captive until selling him to Elizabeth in 1572. He was executed at York on 22nd August and was beatified by Pope Leo XIII in 1895.

This window illustrates how history can be interpreted in wildly different ways. It says that Thomas was executed for his Catholic faith, but the Protestant Government viewed him only as a traitor, and he was executed as a result.