About Us Our Wonderful Area Our People

It was probably around 8000BC, after the last ice age, that people began to move into this area. These people are usually categorised as “hunter-gatherers” and thought of as mainly nomadic. Their presence is shown by discoveries of simple tools and occupation of caves such as those near Roughting Linn with their (perhaps) carvings of the period. The discovery of a mesolithic (as this period is called) house near the shore at Howick, which has been shown to have been in occupation for 100 years, suggests a more settled population. The house at Howick was circular, about 6 metres in diameter and 7 metres high. A replica has been built on the site. 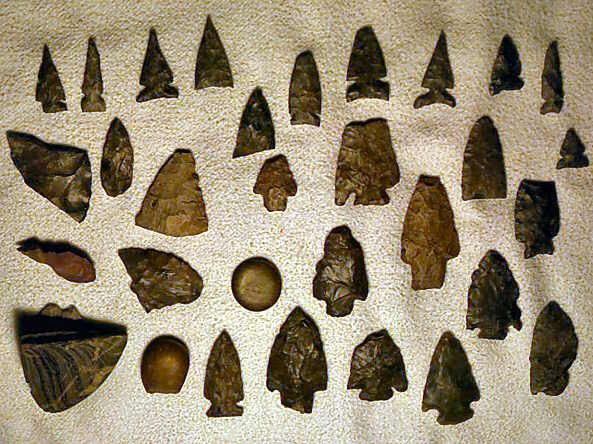 The evidence for occupation in the following neolithic period is mainly confined to burial sites and more sophisticated tools. At the end of this period, around 2000 BC, the puzzling, and as yet unsatisfactorily explained, rock carvings, known as “cup and ring marks” appear along with burial cists (stone coffins). In the next millennium, evidence of a more communal lifestyle can be found in hillforts. Apart from Yeavering Bell, most hillforts in Northumberland are fairly small. The Roman geographer, Ptolemy, writing in the second century BC, identified the people living here when the Romans arrived as part of the Votadini tribe. Their lands, according to Ptolemy stretched from the Tyne to the Tweed. Their (British) language was used in the names of rivers and hills, and is mingled in our common speech.

The Roman army arrived in Britain in 43AD. But it was not until Agricola became the governor of the British province in 78AD, that any Roman campaign extended north of the Tyne. Even then he seems to have used Corbridge as base and marched to Scotland through High Rochester and Chew Green. The Votadini seem to have accepted Agricola’s terms for surrender from the start and to have remained at least semi-autonomous, and were spared conquest and destruction. The Roman positions beyond the Firth were abandoned in 90AD (one of the four Roman legions in Britain was withdrawn at this time to deal with problems on the Danube) and, around 103AD, they were back to the Tyne. Little more is known about Britain until 117 when Hadrian, on becoming emperor, was given a report that the Britons could not be kept under Roman control.

Hadrian came to Britain in 122AD and ordered the building of his wall. It could have been hardly finished before a new emperor (Antoninus Pius) ordered a change of plan and the army moved north in 139 and constructed the Antonine Wall from Firth to Clyde. This wall was apparently abandoned in 158 and Hadrian’s Wall brought back into service. A new Emperor, Septimus Severus, arrived in 208 with the intention of making all Britain part of his Empire. He began campaigning in Scotland, but fell ill and died, at York, in February 211. Hadrian’s Wall was probably the frontier from then until the withdrawal in 401.

This means that what was to become Alnwick, and the whole of Northumberland, was outside the formal Empire for most of the Roman occupation. It may also have been largely ignored by them, due to the compliance of the Votadini leaders paying only some form to taxation probably in the form of cereals and animal products. It was a rural area with apparently long established (that is, pre-Roman) farms and no centres of population. The Devil’s Causeway (a name it acquired long after the Romans left), which ran from Dere Street just north of Corbridge toward Tweedmouth, appears never to have been finished. A change of plan by a faraway emperor probably put a stop to it. The road passes just to the west of Edlingham at Learchild and this is the probable site of the Roman fort of Alavna. It is dated to the 1st or 2nd century and is of two dates with an earlier inner fort being replaced by an later slightly bigger one. So, maybe, there was more than one change of plan. A further road from this point lead west to High Rochester. Other forts along the line of the Devil’s Causeway have recently been identified by aerial photography. The roads and forts are thought to date from Agricola’s time.

Because of the limited impact of the Romans in this area, their withdrawal in 410 AD probably had very little difference to the people living here. The next invasions, by the Angles in the seventh, the Vikings in the eighth and ninth and the Normans in the eleventh and twelfth centuries, certainly caused more destruction. But perhaps most people continued to seek to make their living and the only change would be in their lord.

The Anglo Saxon chronicle assigns the date 547 for the Angles’, in the person of Ida, arrival in this part of the world. Ida was a local chieftain who travelled up the coast from East Anglia (where the Angles had arrived from the continent) in search of land on which to settle. In this, he, or his descendents, were successful. His grandson, Aethelfrith ruled over Bernicia – a kingdom stretching from the Tyne to the Tweed. It was soon joined with Diera to the south to form Northumbria covering an area north from the Humber.

Bede, writing in the early eighth century, tells us much about the development of Christianity particularly after the arrival of St Aidan in 635. Survivals from this period include the Lindisfarne Gospels, the Rothbury and Alnmouth Crosses and, from late in the period, parts of Whittingham Church. The Rothbury cross has been dated to the first half of the 9th century and its base forms the base of the font in the church. More fragments are in the Great North Museum in Newcastle as is the Alnmouth cross which is thought to date from the end of the same century or the beginning of the next.

It was during the Anglo-Saxon period that some of the villages we know today began to be formed. Some, such as Whittingham, Edlingham and Eglingham seem to have existed by 737 when they were supposed to have been given to the Community of St Cuthbert (that is, Lindisfarne Monastery) by the then king, Ceolwulf. There were also Anglian trackways linking these villages and them to Lesbury – which seems to have been where the local lord lived.

Bede also wrote that in AD 684, a synod assembled “near the river Aine, at a place called Twyford”, meaning “the two fords”, where the monk Cuthbert was chosen to become Bishop of Lindisfame. Both Whittingham, where two fords still exist, and Alnmouth, where changes to the river have obliterated them, answer to the description, but a spot on Church Hill where a church stood in Anglo-Saxon times is marked with a wooden cross signifying Alnmouth as Twyford.

In 1066, William invaded England, but it was not until the next century that Normans actually settled here in Northumberland.