About Us Our Wonderful Area Castles

There are three major castles in the area, Alnwick, Warkworth, and Dunstanburgh, as well as the smaller Edlingham Castle. 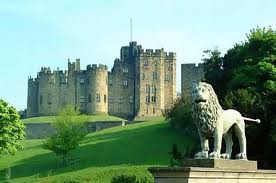 There are also ruins of twelfth-century castles at both Callaly and Harbottle. The buildings now known as Callaly Castle and Harbottle Castle are seventeenth-century manor houses

The first structure at Warkworth is thought to be the work of Henry, Earl of Northumberland, who was the son of David I of Scotland in about 1150. At this time, Northumberland was effectively part of Scotland. After Henry II regained the county in 1157, he awarded the castle, and barony to Roger FitzRichard. It was however captured by Scottish forces in 1173 during William the Lion’s ill-fated invasion. On that occasion, William was captured at Alnwick and Warkworth regained. It remained with FitzRichard’s descendents until 1311 when, due to financial problems, they arranged with the king (Edward II) to surrender Warkworth and their other Northumberland possessions in exchange for some estates in the south. Although the arrangement didn’t come fully into effect until 1332, by which time Edward III had become king, the castle was controlled by the king well before then.

Edward, probably finding defending the castle from the south difficult, granted ownership to Henry de Percy II. It was Percy and his descendents that were responsible for most of the building we see today. The most important addition, and the most substantial remains to be seen today, was the keep. It was Henry de Percy IV, who was to become the 1st Earl of Northumberland, who had this remarkable building constructed. It is notable for the design features which provide all the necessary facilities suited to the fine lifestyle of its occupants. While the Percys troubled relationship with the crown led to their estates being confiscated on a number of occasions, the castle remained mostly in their hands until 1922 when, as an ancient monument, it was placed by the then Duke of Northumberland into the care of the state. It is now in the custody of English Heritage.

There is a remarkable story of John Common of Denwick, who in the 1800s stood on his head on the highest tower of Warkworth Castle, then performed the same feat on the edge of BrizIee Tower in Hulne Park. He and his family were noted for giving demonstrations of their strength and extraordinary feats.

Incorporated in the present Callaly Castle are the remains of an ancient Border tower which was chronicled in 1416. Legend tells of an attempt by a Lord to build the castle on a hilltop, but he was thwarted by his wife who did not want it and sent retainers out each evening to pull down the stones which had been put up during the day. The scheming lady got her own way, and the castle was built on lower ground where the present building now stands. The legend is recorded in verse:

“Callaly Castle stands on the height,
Up in the day an ‘doon in the night;
If ye build it on the Shepherd’s Shaw
There it’ll stand an’ never fa’”

Lancaster between 1313 and 1325, the ruins of Dunstanburgh castle stand in a dramatic situation high above the sea on a ridge of basaltic rock. The large, 11 acre site, consists of a dramatic gatehouse, walls on the east, south and west and two towers on the south and one on the west. The north side is protected by sheer cliffs down to Embleton Bay. After Thomas Lancaster’s execution for treason, the castle was inherited by John of Gaunt, son of Edward III, who substantially remodelled the Castle making the gatehouse into the great tower and moving the entrance round to the west behind his newly created inner ward. However, the castle had no real function being well away from the border and routes that would be taken by Scottish invaders. It was probably built as both a place of refuge and a status symbol.

By the middle of the sixteenth century, the castle had fallen into disrepair, and some of its materials had been sold for use in local buildings.

The remains of Edlingham castle, lying in a valley between heather-covered moorland, seem to have begun in the mid 13th century as a moated enclosure. A hall house was built in about 1295-1300 by Sir William Felton and the solar tower behind, now the most substantial remains, by his son in 1350s. Today, the castle, railway viaduct and the (mainly) 12th century church form a picturesque group.

Harbottle castle in Coquetdale was built about 1160 for Henry II by the Umfravilles and at one time was the most distant English outpost on the Border. Besieged by the Scots, and partly destroyed after Bannockburn, it was restored sufficiently to accommodate Margaret Tudor, widow of James IV of Scotland and sister of Henry VIII, who, after the death of James at Flodden, married the Earl of Angus. There she gave birth to a daughter who was to become mother-in-law of Mary Queen of Scots, and grandmother of James VI of Scotland who became James I of England. Margaret Tudor’s first marriage was described as ”The Union of the Thistle and the Rose”. The local hostelry is said to have changed its name according to which flag was flying during border hostilities. The name of the present 250-year-old inn in nearby Alwinton recognises both “The Rose and Thistle”.

Alnwick Castle was begun by the first baron of Alnwick in the time of King Henry I. While it was probably built as a simple “motte and bailey” structure, it was soon rebuilt in stone and by the middle of the twelfth century, the Castle was described as being “very strongly fortified”. It was substantially of the same outline as seen today, consisting of a circular keep surrounding a courtyard, with an inner and outer bailey. Early twelfth-century masonry throughout the curtain walls provides evidence that the Castle site covered practically the same area as now.

The first barons were the Vescy family and on the death of a William de Vesey, in 1297, who had no legitimate heir, the estates were left to Bishop Bek of Durham. In 1309 he sold it to Henry de Percy. Without altering the general design of the Castle, Henry 1st Lord Percy reconstructed the Keep, built the Barbican and Gatehouse, and either built or rebuilt most of the towers on the curtain wall. The restoration was continued by his son Henry who was responsible for the Octagonal Towers on either side of the entrance to the Keep.

In 1562 Thomas, 7th Earl declared he could not entertain the Scottish Queen because the
Castle was unfurnished and he had little money. However, some seven years later he had carried out considerable restoration and refurnishing for his own benefit.

Henry, 9th Earl was known as “The Wizard Earl” on account of his fondness for the study of chemistry and astronomy. The Castle was not used as a family residence after his death in 1632, and the title became extinct on the death of the 11th Earl. The latter’s daughter Elizabeth succeeded to the Barony, which passed to her son, and then to his daughter, wife of Sir Hugh Smithson, a Yorkshire baronet.

Sir Hugh reorganised the estate management, introduced up-to-date methods of farming and equipment, and engaged landscape gardener Capability Brown who transformed Hulne Park. He employed the celebrated architect Robert Adam to restore the interior of the Castle and make it a suitable residence for his family. For services to the King and his territorial influence Sir Hugh was created 1st Duke of Northumberland in 1766.

On a visit to Alnwick, the novelist Sir Walter Scott noted that one tower dominating the others would make the Castle appear more imposing, so during restoration by Algernon, 4th Duke in 1854 under the direction of architect Anthony Salvin, the Prudhoe Tower was built at the western end of the Keep. A Chapel was added at the opposite side.

Algernon, 6th Duke completed restoration begun by his grandfather and Henry, 7th Duke excavated the moat under the Barbican, replacing the paved roadway by a wooden bridge more in keeping with the building. The present Duke and Duchess continue to ensure the maintenance of the building and its contents, and to preserve Alnwick’s historic castle for future generations of their family and visiting members of the public.