About Us Our Wonderful Area Coal Mining

Early records show that the coal trade could have begun in Northumberland from the black stones washed up by the North Sea (or German Ocean as it was previously called) onto the beaches. This was was found to burn like charcoal. The stones were christened “sea coal”. The terms “pit” and “pitman” may even have originated at Holburn, north west of Belford. There is evidence that coal was dug there in the mid-1200s. and that a “Roger Piteman” granted land in the vicinity to the monks of Lindisfarne. 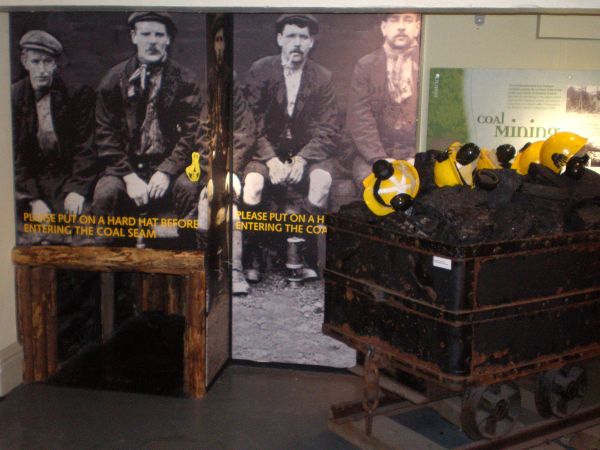 The replica coal mine at Bailiffgate Museum

In an Alnwick charter dating from the mid-1200s there is mention of a street called “Coliergate” leading from “Heydon” or Aydon Forest which would be the present Clayport. Edlingham records show that coal was worked at Lemmington Bank Top from at least 1686. A pit shaft was sunk in 1840 and closed around 1890. Bracken Cottage and Ros Cottages on the roadside were shown as pit cottages.

Coal was extracted on Coquet Island in the sixteenth century, and on the shore at Amble. The use of coal in the twelfth century in a smithy at “Stretton” near Shilbottle may have been where Sturton Grange Farm is situated today. Other collieries were being worked in the Shilbottle area by the mid-1700s and a waggonway was opened in 1809 to bring coal to Alnwick.

Longdyke pit at Bilton Banks near Shilbottle had an endless top-rope haulage system (i.e. with a return wheel) installed to replace the original horse-drawn system. It took the coal tubs to Alnwick, crossing bridges and travelling up and down steep gradients on the way. Equipment at the pit was found to be out of date when the Co-operative Wholesale Society (CWS) took over from the Shilbottle Coal Company prior to 1920.

Although the district was isolated from the Northumberland and Durham coalfield by the hard igneous rock of the Whin Sill, there were three main mines in the early 1900s. Longframlington, Whittle Colliery at Hampeth, and Shilbottle were unique in that each only worked one seam. Longframlington was linked by-a 3-mile aerial ropeway operated by a 6-horse-power engine which could carry 32 tons of coal per hour to the screens at Whittle. A new drift was sunk at Whittle in 1917.

The Shilbottle Grange pit had 2 shafts, each 290 metres, and a railway link was formed to take coal to a siding beside the main line. In 1930, the CWS took over Longframlington and Whittle from the South Shilbottle Coal Company, closing the former in 1931. Between 1948 and 1952, modernisation at Shilbottle included a 3-mile straight roadway for underground locos to take all the coal from one loading point to the shafts. At its peak 807 men produced 272,000 tons of coal in one year. The coal was noted worldwide for its quality for household purposes, and was said to have been burned on the fires at Buckingham Palace.

In 1965, another new drift was sunk at Whittle, some 500 metres long and at a gradient of 1 in 3. It was 1½ miles from the old one. Production commenced in 1966 with the coal belt-fed to the entrance of the drift. Modernisation included a narrow-gauge track to convey men between the drift and the pithead baths. In 1978 an underground roadway was driven between Shilbottle and Whittle, and the two pits became one. Shilbottle ceased production in 1982 with a loss of 700 jobs. Some men transferred to Whittle making a workforce there of 1,100 men. At one time Whittle produced 700.000 tons in a year.

For over 300 years the men had hand-worked the coal. The decision to convert to machine cutting, which was later said by management to be unviable, resulted in the closure of Whittle in 1987. The following year it was the first colliery in the country to reopen under private enterprise, with employment for 40 miners. but closed again in 1996 with coal still unworked.

Several collieries existed in the coastal area near Amble. In 1783 there was a “colliery and seam of coal” situated on the rocks at Amble Point. A shaft was sunk in the early 1800s in Hauxley township and named Radcliffe. It closed in 1892 when flooding and fire occured. Togston pit opened a few years later with a line connecting it to the Radcliffe Colliery line. Another shaft was sunk in 1900, a mile from the original pit at Radcliffe, and named Newburgh. At that time, the pits, the railways between Broomhill (where another mine existed) and the coal staithes, as well as Amble harbour and the ships, were taken under new ownership and the entire business renamed Broomhill Collieries.

The engines or “tankies” operating on the mineral line from Broomhill to the staithes at Amble harbour were named after Northumbrian rivers including the Coquet, and the coal boats or “colliers” were named after local villages such as Togston. Newburgh closed in the 1920s due to severe flooding. A shaft sunk at Hauxley in 1926 survived until the late 1960s and some miners were transferred to Shilbottle and Whittle. A drift mine sunk at Radcliffe closed in 1962. With coal production in decline, the last shipment left Amble harbour in the late 1960s, followed by the demolition of the staithes.

A determination to reach the coal at Radcliffe led to the demolition of the rows of miners’ houses in 1971 (their occupants were re-housed at Amble) to make way for open-cast mining. The latter provided new employment, as well as changing the landscape as piles of soil and rock built up to expose the coal seam. Now most of the land has been returned to agriculture, and some has been transformed into Hauxley Nature Reserve with a lake and islands, wetland pools and habitats for wetland plants and animals as well as coastal birds. The Reserve provides hides for viewing birds such as terns, redshank, ringed plover and shelduck. Other reserves and a country park have been created in the former mining areas further away.