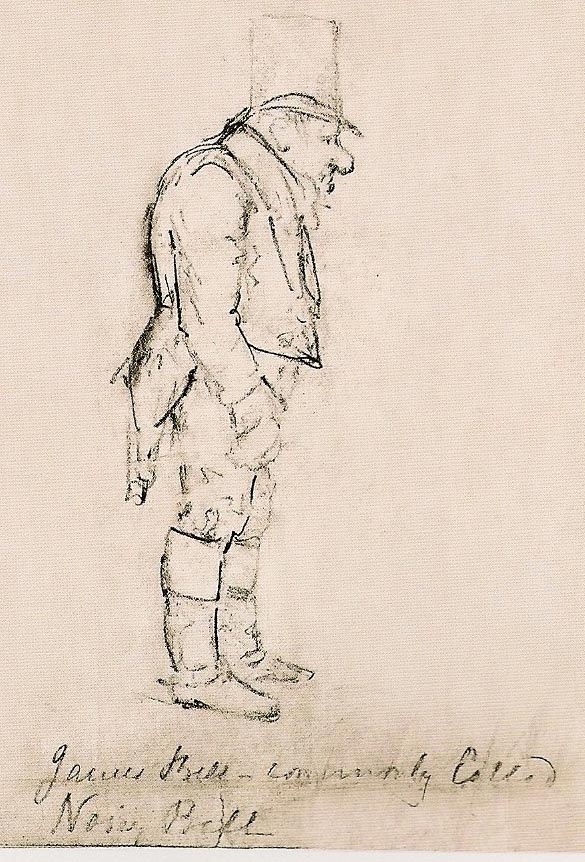 One of the drawings by Percy Forster in Keith Middlemas’s book, As They Really Were, The Citizens of Alnwick in 1831, is of “James Bell,  commonly called Nosy Bell.”

On the back of the drawing is written “formerly a shoemaker in Newcastle, went out of Alnwick when a boy with five shillings in his pocket and returned with nearly £6,000.”

“Shoes of a new Construction, the peculiar Advantages of which are, that they will never by liable to slip off the Heel, and will always fit close, even after they have been long worn. No Dust, Dirt, or Gravel can enter, and the Stockings will last much longer. To the utmost Simplicity and Elegance these Shoes unite superior Strength, Durability, and Usefulness; they are equally appropriate to be worn by Ladies or Gentlemen, and excellently suited for either Walking or Dancing, never injuring the Tendons of the Feet, so much complained of in the Use of common Shoes”.

“The Patent Shoes may be worn either with Buckles, Clasps, or Shoestrings, as agreeable to the Fancy of the Wearer – A Trial, or even inspection alone, will be sufficient to comprehend their Superiority. They are highly approved of by the Nobility and Gentry of London.”

Under this James Bell : “Most respectfully informs the Ladies and Gentlemen of Newcastle and its Vicinity, that he is duly authorised by the Patentee to manufacture Ladies and Gentlemen’s Shoes of every Description, agreeably to the above mentioned Patent, and begs Leave to assure those who may please to favour him with their Commands, that he will attend to their Orders with Care and Punctuality.”

In the Poll Books for 1832, 1834 and 1835 there is a James Bell who lives at Hope Terrace, Alnwick – so one ssumes that he has moved North from Newcastle by then.  Percy Forster’s mother also lived in Hope Terrace, so it is likely that this is the James Bell in the drawing.

This notice appears in the Alnwick Mercury on the 21st of November, 1874: “Sale of Property in Alnwick. – On Thursday afternoon last, at the White Swan Hotel, Mr. Thomas Robertson brought to the hammer a house in Percy Terrace next to Percy House, the property of the heirs of the late Mr. James Bell. The house consists of parlour, kitchen, scullery, and offices on the ground floor, with two bedrooms and light closet above. It was set away by Mr. E. Allen for £200 and after a spirited competition between Mr. D. Geggie and Mr. L. Ainsley, it was knocked down to the former gentlemen for £400, acting we understand on behalf of Mr. Thomas Amory.”

This is the property now known as 1 Lovaine Place, as according to the census records and a Deed of Sale for Lovaine House on 12 May 1882, Mr. Thomas Amory owned the property to the north of that house, i.e., 1 Lovaine Place. The heirs of this James Bell could have easily purchased the property, considering his wealth when returning to Alnwick from Newcastle.