Service History:
Soldiers DiedÂ…' records Locke as having enlisted at Couglan Castle. No such place can be traced through a Web search, the nearest match appears to be Cloghan Castle, Ballingarry, County Galway, Ireland. While this may seem unlikely, conceivably it could have had something to do with British troops sent to Ireland in April 1916, to quell the Irish 'Easter Rising'.

There is no mention of Locke's father on both the 1901 & 1911 Census returns. The 1891 Census shows him to have been a Carter, so it's conceivable he worked away from home for much of the time.

While Elizabeth is shown as the Head of the Household in 1911, there's no suggestion she'd been widowed. The Census records her having been married for 27 years, during which time she'd had six children, four of whom were still alive.

At that time, the family occupied four rooms at Cheswick Buildings, Beal, Northumberland. At the time of the Census, the family comprised Locke's mother, older brother Peter (27; born at Hay Farm, Ford; a Farm Horseman; single), older sister Isabella (18; b. at Ford Moss; single), & Locke. Presumably, his other surviving sister, Jane (b. about 1886; at Ford; an Outdoor Farm Worker), had left home, perhaps on marriage.

In 1911, Locke was employed as a Farm Horseman.

Resident at Tenter Hill, Wooler at the time of enlistment. (N.B. The entry in 'Soldiers Died...' suggests this may be nearer Kirknewton.) 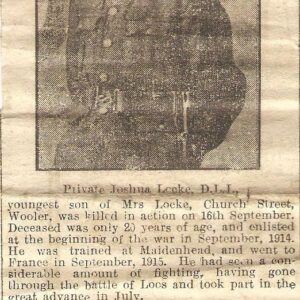