Wounded less than a month after arriving in France. In letters to his mother he described his time in France & his journey to hospital at Aberdeen for treatment of, & recovery from his wounds.

Writing to his mother from hospital in Aberdeen: 'I had to stop with the Colonel's horse at the village where I was wounded. I was getting some things off the pack-horse when a big 'Jack Johnson' came over & blew the horse's head right off & I got the rest. I have got 22 shrapnel wounds in my leg, arm, shoulder & hip. The doctor says I will soon be better & home to see you all.'
(Source: fusilier.co.uk/north_east_northumberland_ww1_great_war_casualties/)

Fife appears to have been discharged from service after being wounded. It seems unlikely he will have died from his wounds so long after being wounded, more likely, perhaps, he was one of those who succumbed to the worldwide flu pandemic.

In 1911 the family was living at PattenÂ’s Yard, Alnwick. Eleanor, then, was widowed. 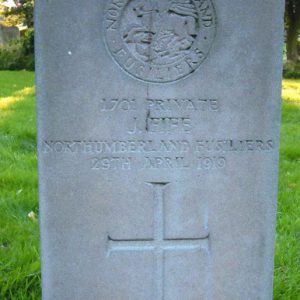 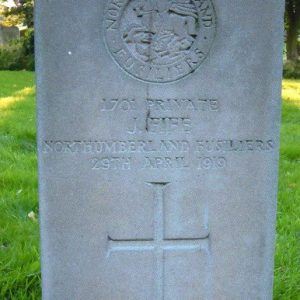