The 1911 Census records Robert & Elizabeth having been married for 17 years during which time they'd had seven children, of whom five were said still to be alive. However the completed Census form records six children although two entries are crossed out, possibly suggesting, either, they had died or they may have been elsewhere at the time of the Census. The record shows: Chrisp (13); Samuel (11); Ernest (7); Mary Elizabeth (5); &, crossed out, Mary (8) & Thomas Joicey (1). All children were born at Acklington or Felton. 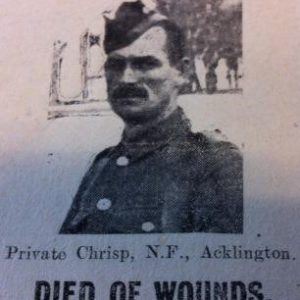