Awarded the Distinguished Conduct Medal. The Citation reads
'Â…splendid example of a British Soldier. One of Lord Robert's bodyguards. He was struck in the side by a bullet, probably a sniper.'

Also, Mentioned in Despatches. The Citation of 31 May 1915 reads:
'...for gallant & distinguished services in the Field. I have it in command from the King to record His Majesty's high appreciation of the services rendered.' This was signed by Winston Churchill.
(Source: 'Portraits of War...'; Edited & compiled by June Watson; Wildgoose Press; 2016; p. 88)

Background:
Born about 1893, at Dublin, Ireland, the son of Lance-Corporal William Topping (ex-Coldstream Guards), by his wife, Harriett, of Youngers Terrace, Warkworth, Northumberland.

Before the war Topping was employed as a Coal Miner Putter.

The 1901 Census records the family living at Ardnaugh (Barrack Street), Roscommon Urban, Roscommon, Ireland. Topping had a brother, William, who also served during the war & survived. 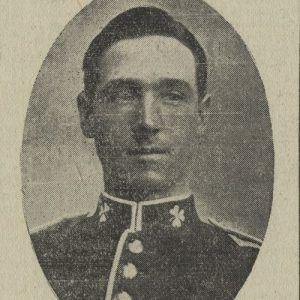