Died of wounds received in action.

'Soldiers Died...' records Balmers place of birth as Blyth, Northumberland but other evidence from Censuses suggests this may be wrong & misleading.

A fourth son was lost during the war. Thomas Frederick Balmer did not serve with the armed forces, rather he worked in the munitions industry & died from Lyddite poisoning. 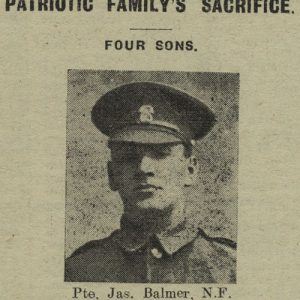