Reflecting on completion of a successful project

Supported by grants from the Heritage Lottery Fund & Western Front Association (WFA), along with contributions from local branches of the WFA & Royal British Legion & others, during 2014 & 2015 Alnwick District WW1 Centenary Commemoration Project Group completed an ambitious project made up of five areas of activities.

These focused on schools & education; IT, including building a searchable database of casualties from the area; heritage; events in 2015 commemorating the Northumberland Fusiliers’ Tyneside Scottish Brigade’s time at & around Alnwick (these men were Kitchener Volunteers); & production of a WFA-sponsored DVD ‘Alnwick 1915 – An Armed Camp’ relating the story of the camp built on the pastures opposite Alnwick Castle where the Brigade carried out its initial training.

In addition, the Group contributed to publication of three books (Alnwick in the Great War by Ian Hall; Me, the RAF & 77 Squadron by Bill Foote, DFC produced & edited by David Thompson; & a recently published work by Howick Heritage Group).

All bar two or over twenty deliverables were successfully delivered – the two exceptions were minor parts of the schools & education programme for which there was no demand for the help & support then available to schools.

The ‘Northumberland Gazette’ recently ran a series of two-page spreads in each of three editions, reflecting on the Group’s activities, events, deliverables, & achievements.  We can do no better than provide copies, as below:

Although the project has effectively come to the end of its planned life, Northumberland Branch of the WFA will undertake further work on the search database & continue to maintain it on-line via these pages on Bailiffgate Museums website.  Similarly, the teaching resources portal & tools will still be available to schools & teachers, as theyve been designed specifically for use throughout the centenary years of World War One.

The WFA can be contacted via ww1alnwickproject@yahoo.co.uk.

The following piece originally appeared in the Introduction Section as an update on the projects progress.  It is retained only for archival purposes. 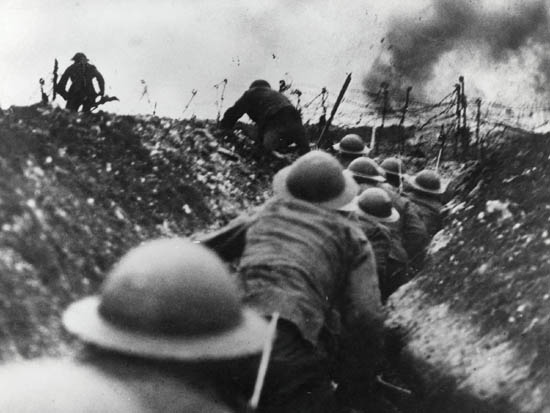 The aim is for this section of the Bailiffgate website to become a useful long-term resource for the people of North Northumberland to obtain information about the First World War & its impact on the families, commerce, businesses, land & buildings of the area.

Funded largely by grants for the Heritage Lottery Fund (HLF) & the Western Front Association (WFA) along with contributions from the local branches of the WFA & Royal British Legion, the project Group:

2.  Another successful feature of the Schools & Education element of the project was
several ‘Living History’ re-enactments by 3rd year Northumbria University students at
Duchess’s High School for about 350 pupils from that school & others in the area.

Check  out here the report in the 20 November 2014 edition of the ‘Northumberland Gazette’.

3.  A history trail leaflet was produced – click here.  Entitled ‘Alnwick and the Great War’
which shows various locations within the town which were used during the First World War
& how that apparently distant war reached into the very heart of rural Northumberland &
affected the lives of the people of Alnwick district.

This free leaflet is available at the Tourist Information Office, Bailiffgate Museum,
newsagents & other shops, cafes & public houses around the town.

4.  In conjunction with Bailiffgate Museum, a searchable database of casualties has been
established – check it out via the centre box on our Home page – & we are
encouraging local history groups & individuals to provide information in order to
develop it further.

Among others, we have been liaising with Northumberland Estates who provided
information regarding estate workers who were involved in the war.

More information on the book is available via the link in the panel to the left-
hand side of this page,

6.   We were also the driving force behind publication of a second book, ‘Me, the RAF and
77 Squadron’, the memoirs of Bill Foote, DFC as a young Halifax Bomber pilot in the
Second World War.

Shortly after publication, in September 2014 Bill suffered a stroke from which he’s making
a remarkable recovery for a man now well into his nineties.  He has relished the success
of his book – the first edition sold out in less than a month! – & it is evidence of his
great  determination that he has recently commissioned a second print run to satisfy
continuing demand for it.

Again, more information on the book is available via the link in the panel to the
left-hand side of this page,

7.   In its 5 June 2014 edition, the ‘Northumberland Gazette’ published a double-page article
written by one of our members about the first Alnwick man to be killed in the war.

The ‘Story  of John Willcox: First man from the Alnwick Area to be killed in the First
World War’ now available via the link in the panel to the left-hand side of this page.

8.   Finally, in conjunction with Bailiffgate Museum in Alnwick, individual members of the
project Group helped set up an initial exhibition, ‘Lest We Forget’ which ran at the
Museum  throughout July & August 2014.

The Group held another exhibition, again at the Museum, which ran from 31 March to 17 May 2015.  The exhibits came from 4 very different sources – 2 major displays of village-based general research plus 2 personal histories.  Planning for this is well-advanced & more information will be available nearer the time.

9.  A march to Alnwick, which some of ‘Kitchener’s Volunteers’ troops undertook in
1915 was commemorated

We offer an article explaining the background to the march .  Click here to be taken to
it.

Members of the local branch of the WFA & others will continue to give talks at various
venues in the area in 2015.

Details of the WFA’s monthly 2015 Speaker Programme are available here.

This website should be particularly useful for those seeking information & guidance to help with their own genealogical researches on ancestors who may have died in the service of their country during World War One.

How you can take part.

There is a database here of all the WW1 dead from the Alnwick & district area known to date. It is unlikely to be totally comprehensive as in the confusion of war there were many men not commemorated on any memorial or not attributed to the Alnwick area.  Please check on the database & if you believe we have omitted a relative of yours let us know using our contact form below.

We are especially keen to show any information or materials which have come down through the generations – photographs; letters; personal / family experience stories; diaries; & any other memorabilia related to the WW1 years.  We will ensure that the material is scanned or photographed carefully & returned safely to you.