Background:
Born 1891 at Woolsington, Northumberland, where his father was a Market Gardener, the son of Charles (b.1863) & Jane Ann Moffitt (nÃ©e Lambert, b.1864) who were both born at Bywell, Northumberland.

By 1911 the family was living at 6, Howard Place, Gosforth. Charles, then, was a Market GardenerÂ’s Assistant. David, aged 24, was a Miner Stoneman (below ground); Moffitt, aged 20 was a Colliery Labourer; Margaret (Jane) had no occupation; Caroline was a Dressmaker's Apprentice; & Mary was still at school. Another daughter, Martha Clarke, had been born in 1903 at Fawdon Old Pit. According to this Census there had been 10 children born into the family but 2 had died.

Moffitt married Elizabeth Thorborn at the end of 1916. Elizabeth (b.1889 at Abberwick, Northumberland), lived at Broome Park, Bridge End, Alnwick, the home of her parents Thomas (b.1859 at Abberwick) & Elizabeth (b.1857 near Ponteland) at the time of her husband's death. She never remarried & died in 1976, aged 87. 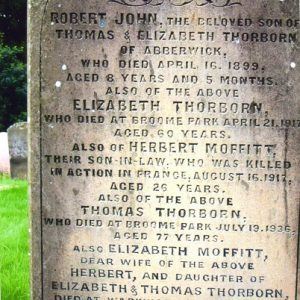 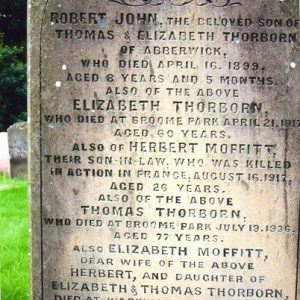