Service History:
Joined the Coldstream Guards as 2nd Lieutenant from the Special Reserve in February 1909, becoming Lieutenant in May, 1910.
(Source: 'The Bond of Sacrifice'; Volume 1, August to December 1914; Page 220)

The Battalion's War Diary recorded the action at Villers-CotterÃªts but makes no mention of Lambton's loss. On 1 September 1914, the Battalion & remainder of 4th Guards Brigade formed part of the rear-guard to 2nd Division. There was heavy fighting in the woods, all day, but the Battalion was only lightly engaged & no casualties were recorded.

Retirement continued in the evening, the Brigade reaching Thury at about 22:30 where a 2Â½ hour halt was made & men were able to get a short sleep on the road. The troops were very tired but in excellent spirits.

The lack of any mention of the loss of an officer on the day suggests Lambton may have been attached to another unit at the time of his death but this is pure speculation & would require further investigation to establish one way or another.

Background:
Born at London on 13 September 1887, the second son of Colonel the Hon. Frederick William Lambton (b. about 1856), 4th Battalion Northumberland Fusiliers, formerly Lieutenant in the Coldstream Guards, twin brother & heir-presumptive of the Earl of Durham, & the Hon. Beatrix (b. about 1859; second daughter of John Bulteel, of Pamflete, Devon) Lambton, of Fenton, Wooler.

The 1891 Census records the family living at 5, Hereford Garden, St. George Hanover Square, London. At the time, Lambton had two older sisters, an older brother & a younger brother. They had a French Governess, & the family had nine servants. 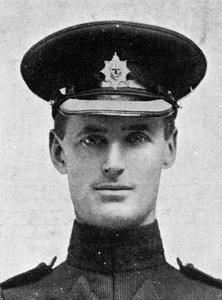