Background:
Born in 1887 at Glanton, Northumberland, the eldest child of George Patterson Barclay (b.1859 in Scotland; a Master Cutter Tailor) & his wife Margaret (b.1858 in Northumberland; a Milliner who ran a small Hat Shop at Glanton with her sister).

Barclay had five younger siblings: Kate (b. 1888; who became a teacher); George (b.1890; died as an infant); May (who married a Canadian & emigrated to British Columbia); Charlie (Romaine Barclay-Kim's father; who fought in WW1); & Jack.

Husband of Jane Eleanor Barclay (nÃ©e Hume; b.1881 at Snitter, near Rothbury, Northumberland). They were married in 1908.

The family were living in Front Street, Glanton at the time of BarclayÂ’s death. They had an inscription added to his headstone: 'Only goodnight beloved, not farewell'.

'Panic arises,
as we near the battlefields,
unknown memory.'

When she visited the 'Trenches of the Dead' at Diksmuide, Belgium:

'Against a blue sky
poppies flutter carelessly
high above our heads.
I stand within the shadows of
sandbags hardened to grey rock
& understand the meaning
of entrenched.'

On a visit to Tyne Cot CWGC Cemetery:

'Bedazzled by now
upon row of white gravestones
youth of the Empire.
Red upon the white
schoolboys leave their offering
for their own long gone.'

Touring the battlefields, Romaine was moved to pen a Haiku on some of the farmhouses she saw:

'Walk round to the rear
of small farmhouses to find
the harvest of the dead.
Carefully tended
these gardens of remembrance
recall where men fell.'

Although short, the simplicity of the following Haiku describes Romaine's experience visiting her great uncle's grave:

'Glanton soil is poured
On Tom's grave at Warlencourt.
Tears fall for the past.'

Her final thought on her last visit to the Western Front:

'What sorrow & waste!
Oh! The pity of it all
for generations.' 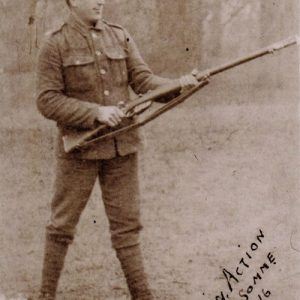