Killed in action on 2 October, 1916. His Commanding Officer wrote:

'It is with the utmost regret I have to report the death of your son through wounds sustained yesterday at duty. He died at 7 p.m.. His funeral, which I shall attend, takes place tomorrow. He will be buried by our Regimental Chaplain in the Military Cemetery at Maroeuil, with his comrades who have fallen in the same cause...

...Believe me, it has come as a very great & personal blow to me. For eight months he was with me in the transport section, but seemed to get dissatisfied, & applied to get back to the Lewis Gun Section. I did all I could to persuade him from giving up his safe job, but in vain. He insisted that if I would not have him back in the section he would get himself returned to his company, although he would very much prefer to come back to the section. So he came back, & has always surprised & delighted me by his cheerfulness under fire, & his cheeriness under the most trying conditions...

...I sympathise with you very deeply in your sorrow, &, in smaller measure, his death is a great blow to me, as it will be even greater to you. All I can say is, he was a fine chap, liked by the whole Lewis Gun Section, & they all join me in offering their deepest sympathy in your sorrow. If I can be of any assistance to you in any way, please let me know.'

'By the time this reaches you, you will have heard that your boy was killed yesterday. He formed one of a working party which had to go up to carry out trench repairs, during the time the battalion is in support to the front line, & it was while engaged on this duty that he met his death from a trench-mortar bomb, which fell in our trench close to him, & besides wounding him terribly, also mortally wounded another man who was working with him.

It may comfort you to know that he could not have suffered much. His wounds were in the arms & right side, & from the start there was little or no hope that he could recover. He was at once bound up & placed on a stretcher, & got back to the Aid Post, but passed away there while the Medical Officer was doing what he could for him. I passed him on the way down, & he was then unconscious, & not suffering I think. I took a great liking to your son, as indeed everyone did. His sturdy, manly courage endeared him to all who knew him, & he was one whom we were all proud of.'
(Source: 'UK, De Ruvigny's Roll of Honour 1914-18'; Part 3; Page 141)

Background:
Born on 2 September, 1897, at in Old Cumnock, Ayr, Scotland, the third & youngest son of Andrew White Hogg, of Ravensdowne, Wooler, Northumberland, by his wife, Annie Amelia, daughter of the late Francis Garden Caird, of Edinburgh. 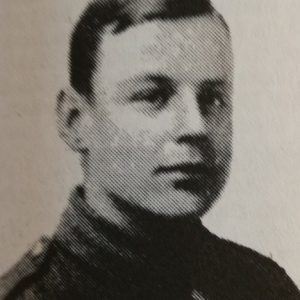